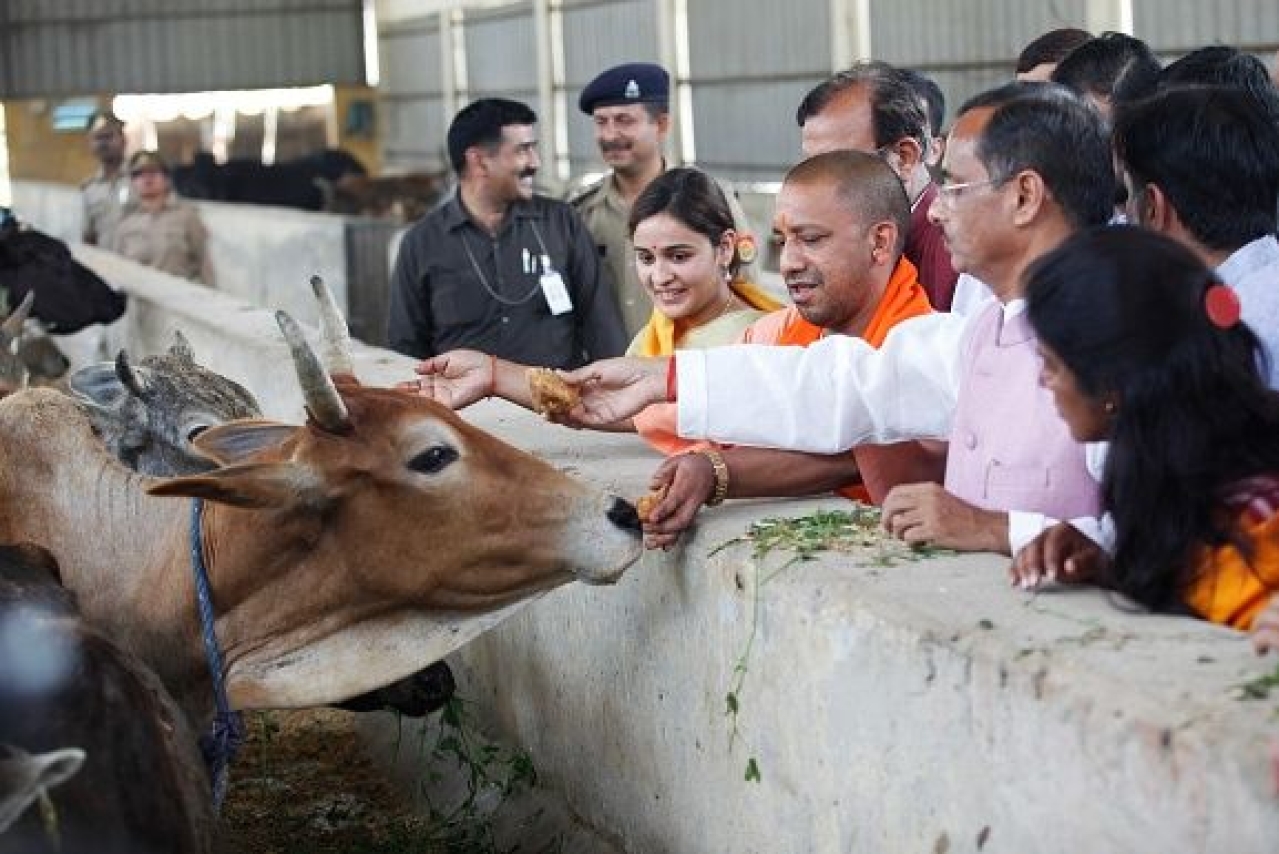 Various news reports from western Uttar Pradesh (UP) have come out about irate farmers locking stray cattle in government schools and health centres to protect their crops.

Some reports have claimed that “the situation has come to this pass since the Yogi Adityanath-led BJP government’s crackdown on illegal slaughterhouses across the state starting March 22, 2017, coupled with the fear spread by self-styled gau rakshaks”.

Some other reports have pushed for slaughter as a solution, blaming the stray cattle problem on “Hindutva paranoia about cow slaughter”.

Serious as the concerns of stray cattle menace are, these reports raise some questions: is the stray cattle problem a new one that has emerged under the two-year-old Yogi Adityanath government? Is slaughter a solution? Do farmers endorse it? Are they unhappy with the Chief Minister’s crackdown on the illegal meat business? What can tackle the stray cattle menace?

To understand the situation, this correspondent travelled to several villages in western UP that are particularly affected by the problem.

On 13 January (a Sunday), residents of Mahawad village in Dadri tehsil of Gautam Budh Nagar district, locked over 70 stray cows, bulls and oxen in a government-run primary school. It was only after the intervention of the police that they released the animals.

Villagers told Swarajya that people from nearby villages had dumped their stray cattle in Mahawad, resulting in a sudden rise in their numbers.

Arya said, a gaushala (cow shelter) in Ghaziabad's Nandgram (some 20 kilometres away) had promised to take the cattle and so the villagers had rounded up more than 70 animals at one place. But in the evening, the gaushala manager stopped answering his phone call. With no option left, the residents simply pushed the cattle inside the nearby school.

Asked why they chose the school, Arya said, "That's because it is the only suitable place, with a gate and four walls. We had no other option." 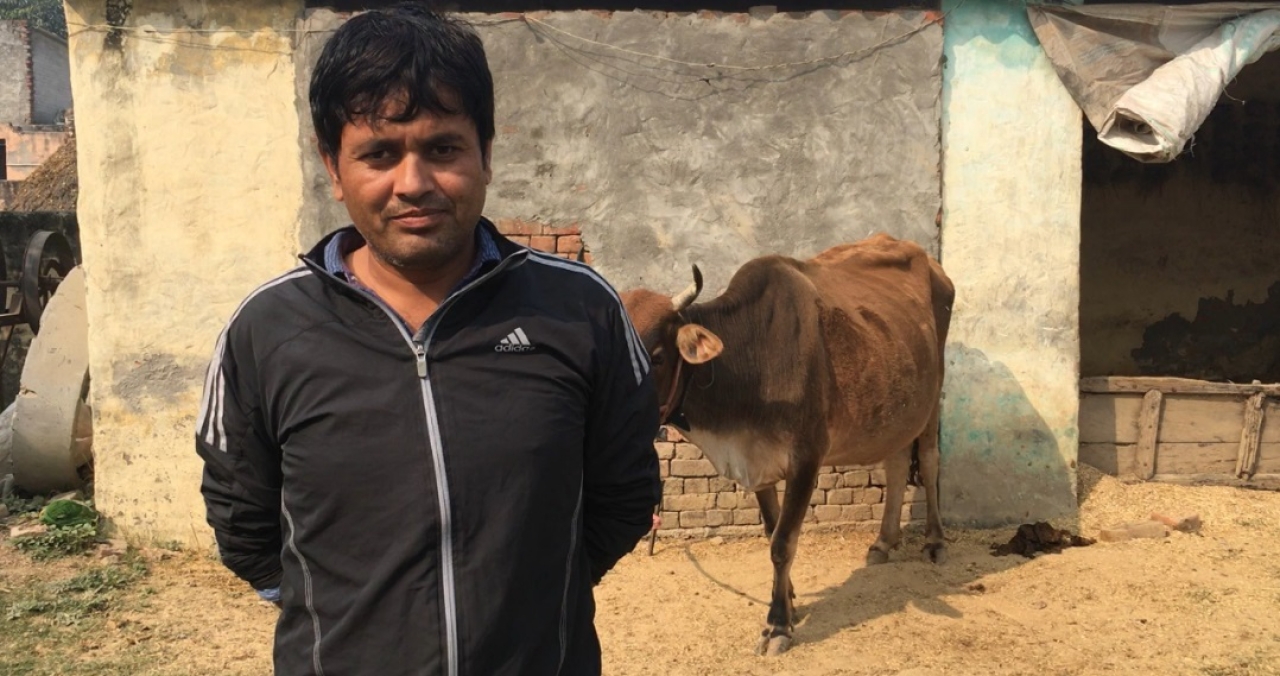 Ashok Arya, a farmer in Mahawad

They had to release the animals soon as police arrived and threatened action.

Kapil Naagar, a teacher and caretaker of the school, told Swarajya that the matter was resolved within an hour as the police and the village head, Pramod Kumar, reasoned with the farmers.

“I arrived at the spot as soon as I heard about it. The villagers had broken the lock and entered. I put my foot down that the animals wouldn't be kept in the school as my children would be coming the next day. The police also intervened. So the problem was solved within an hour,” he said. The school has 39 students, he informed.

Pradhan Pramod Kumar told Swarajya that villagers had taken the step only because of the false promise made by the gaushala. "We are in talks with the administration to identify another gaushala that can take the animals," he said. Kumar called it a non-issue, blaming the media for exaggerating the events.

However, inspired by Mahawad, residents of adjoining Badalpur and Dujana villages are already planning similar moves, “in order to wake up the administration." In fact, similar incidents have been reported from other districts too, like in Agra, Aligarh, Mathura and Kanpur. 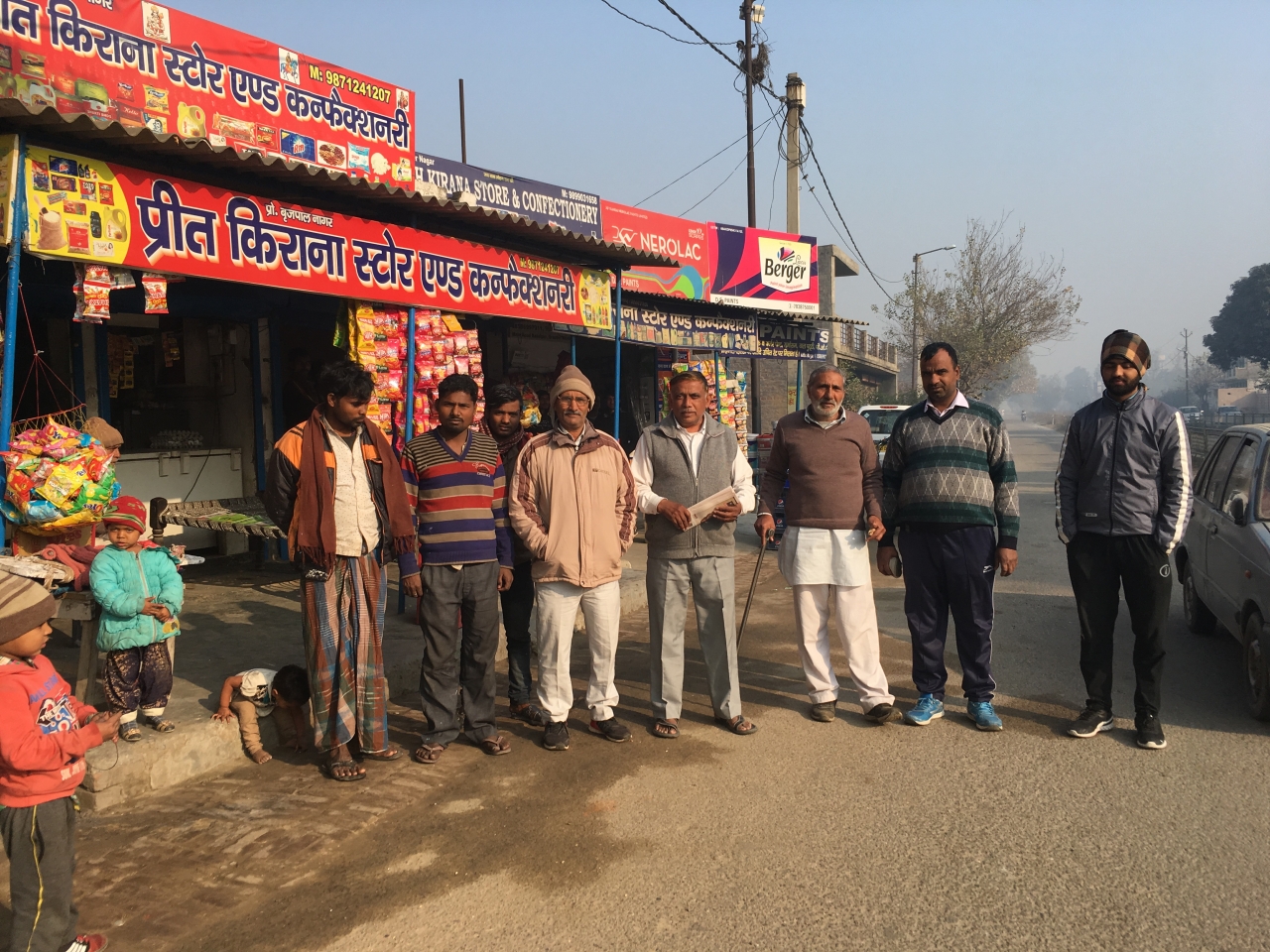 Residents admit – and even a cursory glance at regional media reports as old as 10 years ago shows – that the problem of abandoned cows is not a new one. After all, dairy farmers have been abandoning male calves and non-milch cattle for years and successive governments have failed to come up with a permanent solution for the abandoned animals. But residents say the problem has worsened under the current Yogi Adityanath government as it has come down heavily on illegal meat business.

Soon after coming to power in March 2017, Adityanath ordered closure of illegal slaughter houses and meat shops across the state. The trade was driven by smugglers who would round up stray cattle at night and sell them to slaughter houses. While it’s true that the order has not been fully enforced and the illegal trade continues, it has definitely taken a huge hit.

So, were the farmers better off earlier?

"Being Hindus we have never supported cow slaughter and actively resisted it," said Chowdhary Bhoop Singh, a farmer in Badalpur.

"We are happy with the crackdown. Yogi is a dharmic man and only he had the guts to do it," said farmer Bhrahm Singh, who also runs a temple and has sheltered around 10 ill cows at his premises.

Mohammad Yameen from Kalonda village said that cow is a sacred animal for Indians and its slaughter cannot be advocated as a solution. 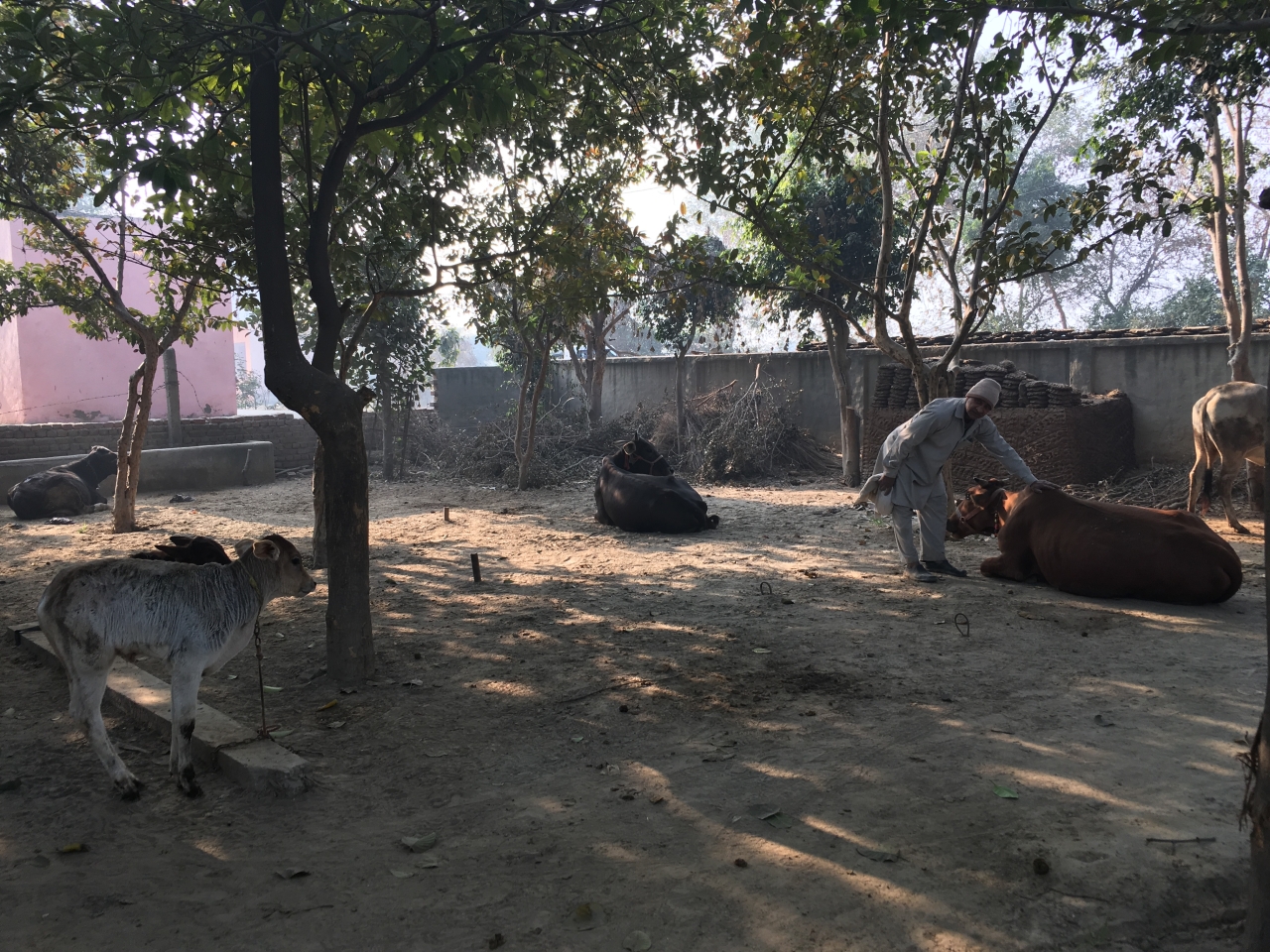 Like them, almost all the farmers that Swarajya spoke to, supported the curb on meat trade and praised the Adityanath government for it.

Their reasons go beyond religious sentiments.

Veer Singh from Mahawad said that under the erstwhile Samajwadi Party government, when this illegal trade was rampant, smugglers wouldn't stop at stealing stray animals. They also targetted their milch cattle and brazenly stole cows and buffaloes from houses.

"I could hardly sleep in those years. The smugglers would come in groups of 10, 20 or even 50, enter our houses with pick-up vehicles and take the animals away. They would come armed and no villager had the guts to stop them," he said.

Madan Singh, his neighbour, said smugglers took away four of his buffaloes and it financially hit him badly.

"Now I sleep peacefully," said Veer Singh, a sentiment echoed by many. 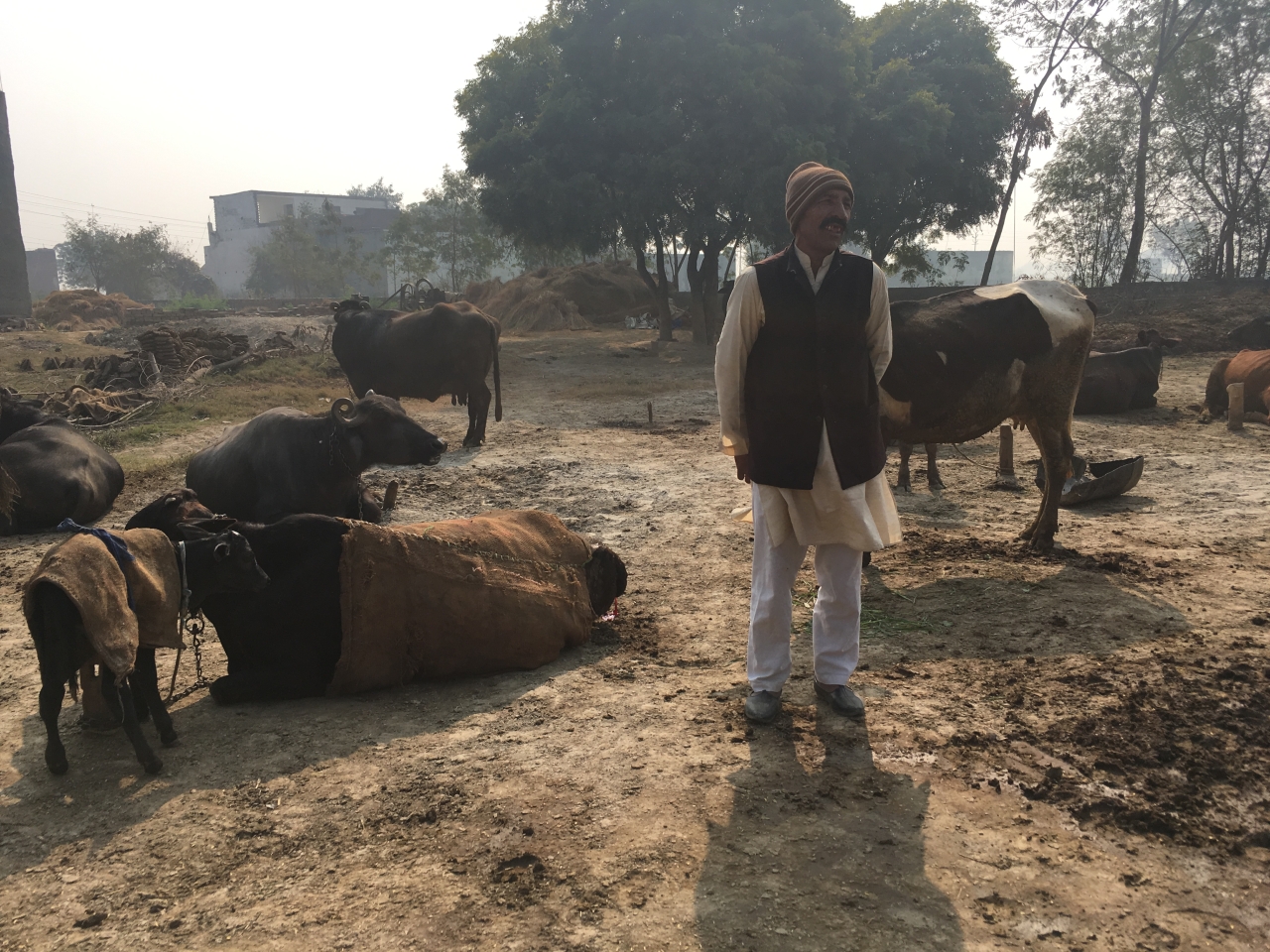 Residents also said that illegal slaughter houses and meat shops were a nuisance. Ali Hasan from Kalonda village said that just about anybody could set up a meat shop or start butchering cattle wherever he liked. "There was just no control over it. It used to be dirty everywhere. There is thankfully respite from that now," he said.

Residents talked about ponds, rivers and fields turning red due to blood from these illegal set-ups which posed grave health hazards. In fact, this nuisance persists in some areas. 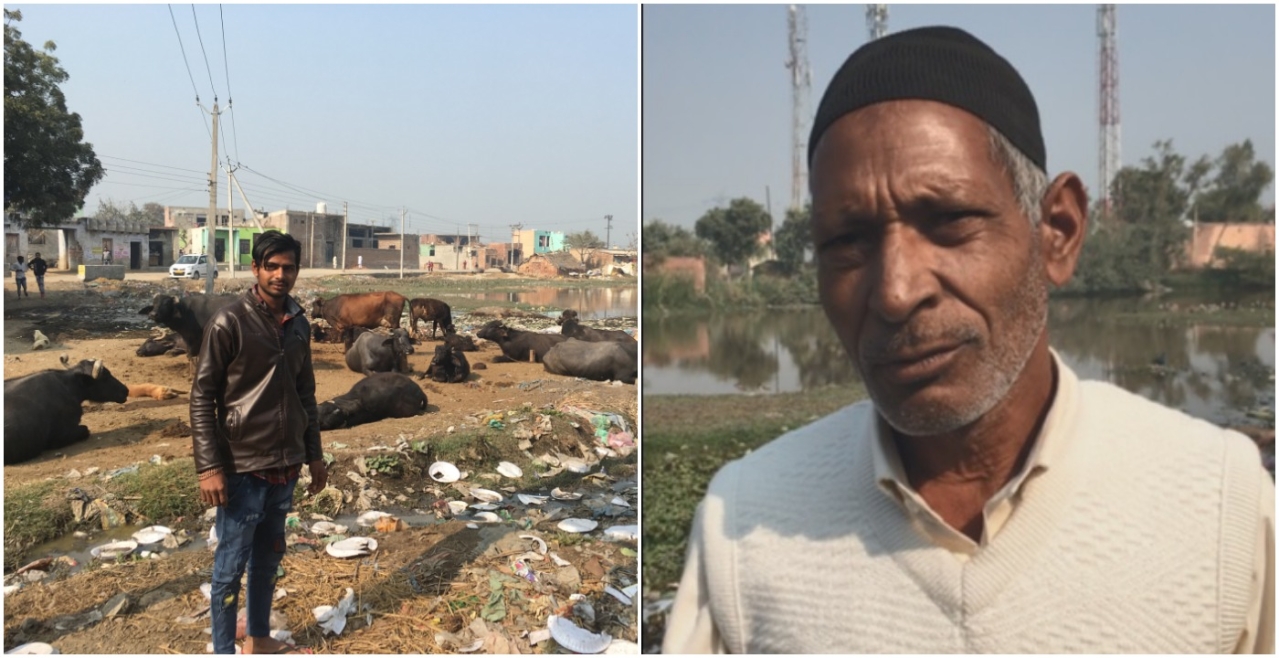 So if not slaughter, what is the option?

Gaushalas. If not in every village then one for a cluster of villages, they say. Residents also called for fining dairy farmers who abandon cattle after "using them".

Bharat Singh of Badalpur alleged that the erstwhile government sanctioned a gaushala 2 km away in Deri Machha, but "brokers ate up all the money". "That gaushala would have given respite to at least three-four villages," he said.

From Sadhopur to Kalonda, a distance of 50 km, villagers complained of officials "eating up money" sanctioned for gaushalas. They also complained of "corrupt" officials under successive governments illegally occupying or selling away gochar bhoomi (grazing land for cattle).

Incidentally, these were part of the solutions ordered by the Yogi government at the beginning of this month. The first-time chief minister empowered the urban and rural civic bodies to run temporary shelters for stray cattle, "either at their own level, through self-help groups or with the help of companies falling under CSR".

He ordered officials to ensure that all stray cows were put in shelters by 10 January, free grazing land from encroachments and track down farmers and levy strict fines on them for abandoning their cattle, among other directives. 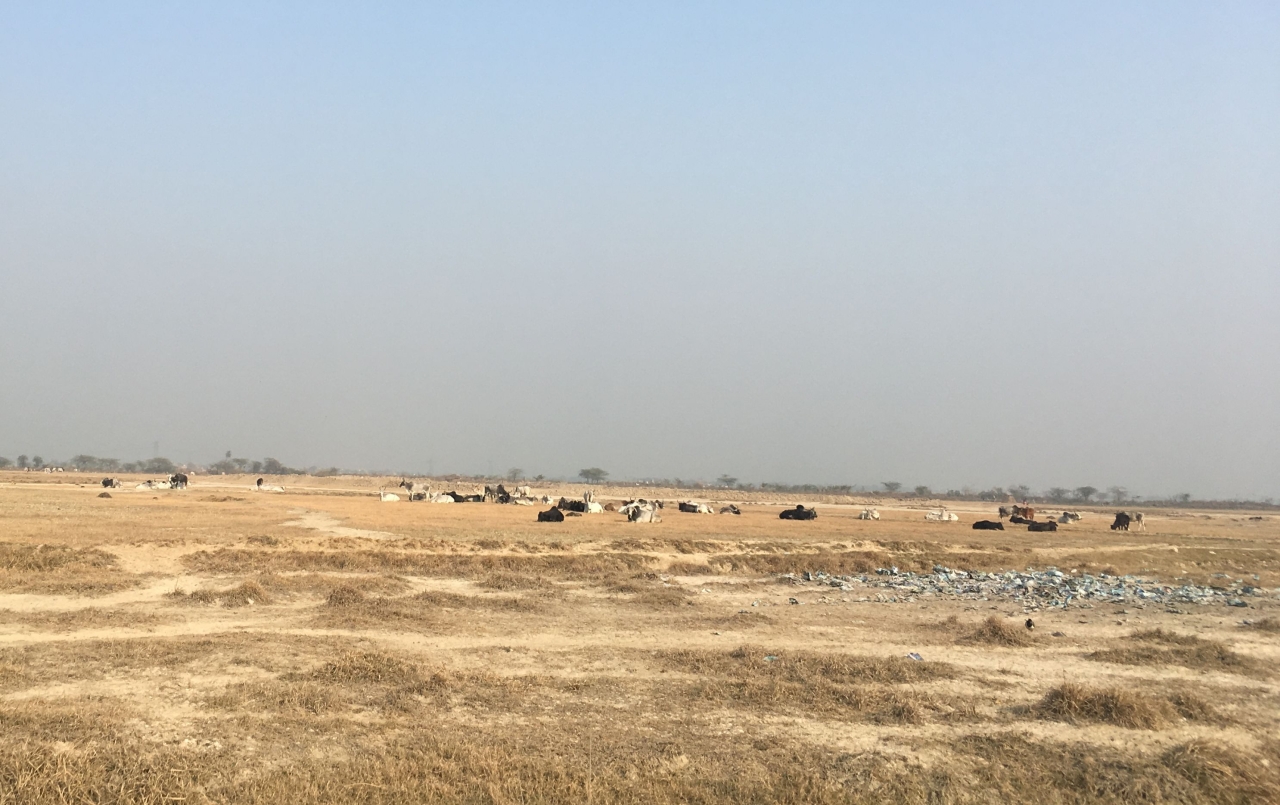 Hundreds of stray cattle seen on the way to Khandera

But almost a month later, these solutions have remained largely on paper. The deadline has passed without providing the said relief.

Dr Nikhil Varshney, deputy chief veterinary officer for Dadri tehsil that covers around 100 villages, told Swarajya that the administration is making “fast progress”. He said that a total of 11 sites have been finalised for temporary shelters and four such set-ups will be operational by the end of this month, namely in Bisahda, Jarcha, Kudi Khera and Khandera.

Of the four, this correspondent visited the one in Khandera village and learnt that the upcoming gaushala is entirely an initiative of the residents, without help from the administration.

Village head Ravindra Singh said that they selected an eight beegha space on the village outskirts that can house 500-600 cows, pooled in money and started raising the walls without waiting for the government nod.

"We have been writing to various government departments for four years now but got no response. Now we are at the end of our patience. We have informed the departments that we are building this shelter. Now it is up to them what they do," said Omveer Singh Tewatia, a retired government officer who took the initiative. Dr Varshney, however, said the temporary set-up has the administration's nod.

Both Singh and Tewatia said that given their struggle with various government departments all these years, they have no hopes from the solutions put forward by the Yogi Adityanath government. "You leave the solutions to babus and they make more money out of it. Why can't individual villages and pradhans be given independence to do it? We all worship gaumata," said Tewatia.

Talking about the genesis of the problem, he said, "NTPC came to this village 35 years ago and threw out the cows from their gochar land. Others let their cows loose after making money off their milk. Their numbers thus keep adding up.”

“What right do humans have to call the cows stray? It is everyone's responsibility to rehabilitate the ones we have made homeless,” he said.

As is evident from our visits and conversations with a large number of villagers, they want gaushalas, and not slaughter, as the solution. But given the state of things, they are neither adequate nor a permanent solution. Add to this the farmers’ own hypocrisy that they vehemently oppose cow slaughter but covertly support it by abandoning their cattle.

Is there an alternative? “Ethical dairy” may be an answer. Swarajya will explore it in the second part of this series.

Get Swarajya in your inbox everyday. Subscribe here.
Tags:
134 Shares