How Karunanidhi Was Outsmarted By MGR, Jayalalithaa On Sri Lankan Tamils Issue 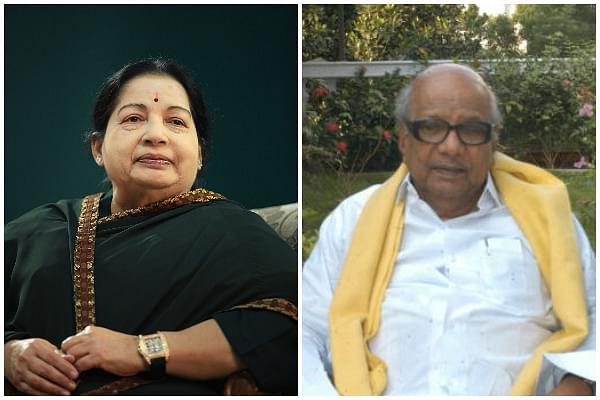 Yesterday (8 August 2018), while the Dravida Munnetra Kazhagam (DMK) patriarch was being interred at Marina beach in Chennai, thousands of kilometres away at Mullaitivu, some Sri Lankan Tamils and traders in the town burst crackers and celebrated his death. It was an unfortunate incident, especially for a person who was seen as the father and mentor of the Sri Lankan Tamil movement.

Probably he was misunderstood, or the Sri Lankan Tamils and their supporters turned against him when the Army under Mahinda Rajapakse overran the Liberation Tigers of Tamil Eelam (LTTE) in 2009 and shot dead its supremo, Velupillai Prabhakaran. But, in a nutshell, it was a story of how the veteran Dravidian leader was outsmarted and out-thought by, first, M G Ramachandran (MGR) and, then, Jayalalithaa.

What happened was that since the 1960s, when Karunanidhi was seen as a staunch supporter of a separate Tamil nation or Tamil Eelam, most of the Lankan Tamil leaders starting from Tamil United Liberation Front President A Amirthalingam would keep in touch only with him in Tamil Nadu.

When MGR became the chief minister in 1977, the practice continued, irking the actor-turned-politician. So, MGR handpicked Prabhakaran, who was someone very junior in the Tamil Eelam movement, and began providing him with all support.

The problem with Prabhakaran was that he saw other Tamil Eelam leaders as his rivals and began eliminating them. This is because he thought he could secure a separate Tamil nation only through violence and he didn’t approve of a soft approach by leaders like Amirthalingam. But Prabhakaran began eliminating one after the other.

In between, the DMK held protests, bandhs and rallies when violence broke out against Tamils in Sri Lanka first in 1977 and then in 1983. In 1983, when many Tamils fled Sri Lanka to take refuge in India, especially Tamil Nadu, Karunanidhi resigned his Assembly seat along with another senior leader Anbazhagan in protest.

After this, he formed the Tamil Eelam Supporters Organisation and convened a national conference at Madurai in 1986 supporting Lanka Tamils demand for self-determination. Non-Congress leaders like Atal Bihari Vajpayee, H N Bhaguna and then Andhra Pradesh Chief Minister N T Rama Rao attended it. It was at this conference that Karunanidhi appealed to him to spare some senior leaders like Amirthalingam and Sabaratnam of Tamil Eelam Liberation Organisation.

The LTTE chief wouldn’t heed and continued with his hit job. Embittered over the LTTE’s actions, Karunanidhi was openly critical of the organisation and showed his dislike for it. Things changed after MGR’s death in December 1987 as the LTTE sought his support. Whether it was desperation on the part of Karunanidhi or any political compulsion or change of heart, MGR’s death resulted in the DMK chief openly supporting the LTTE from then till 1991. But that was to sow the seeds for further trouble, which in hindsight, proved a never-ending one that resulted in bursting of crackers in Mullaitivu on 8 August.

In his support for the LTTE, he refused to welcome the Indian Peace Keeping Force (IPKF) that was sent to Sri Lanka to implement the Indo-Sri Lanka award. He had even charged the IPKF comprising Indian jawans with “killing thousands of innocent Tamils and raping women”. Karunanidhi even demanded the resignation of Lanka’s North-East Province Chief Minister Varadaraja Perumal. When Karunanidhi became the chief minister again in 1989, Eelam People Revolutionary Liberation Front leader Padmanabha was shot dead in Chennai by the LTTE and the assassin had a free run back to Sri Lanka even as Tamil Nadu police shut its eyes.

In fact, his tactics baffled the Americans with a cable sent by the US Consulate General, Chennai and put out by Wikileaks saying that Karunanidhi’s “obvious tilt towards the LTTE was generating widespread controversy and dismay in Tamil Nadu. The cable said that the DMK leader had gone out of his way to demonstrate his commitment to the Tigers. The cable quoted his critics as saying that he was burning his bridges with New Delhi, which proved to be prophetic.

In 1991, when Rajiv Gandhi propped up Chandrashekhar as the prime minister Karunanidhi’s government was dismissed on the charges that he was passing on information collected by the Intelligence Bureau to the LTTE. In fact, the late J Jayalalithaa who saw an opening for her to take over the mantle in the State after she entered into an understanding with Rajiv Gandhi was also behind the move to dismiss his government. A few months later, Rajiv Gandhi was assassinated by the LTTE when he was addressing an election rally in Sriperumbudur in Tamil Nadu. That left Karunanidhi bitter and since then, he began dealing the organisation with caution.

On the other hand, Jayalalithaa’s strategies and policies on Sri Lanka pushed Karunanidhi on the backfoot, though he held firm to his view of a separate Tamil nation being the solution. During the National Democratic Alliance term under Vajpayee, he had even suggested that Lankan and Eelam Tamil could part ways and live peacefully like a couple of nations in Eastern Europe.

Things turned worse after the Rajapakse government went on the offensive to wipe out the LTTE from 2006. During 2008-09, as the Sri Lankan Army’s offensive increased, he was asked to step in and rescue. But he could do little despite being an important member of the United Progressive Alliance (UPA) government. With a determined Rajapakse government pursuing its agenda to finish the LTTE, there was little either he or the UPA government could do.

A cable by the US Consulate General, leaked by Wikileaks, said that probably Karunanidhi overplayed his hand in October 2008 by threatening to pull out of the UPA if the Manmohan Singh government could not force a ceasefire. The threat raised expectations but the people felt badly let down when he backed out and his indefinite fast that he withdrew within hours on “assurance of a ceasefire in Sri Lanka” further dented his image.

In fact, the media hounded him in a such a way that the Sri Lankan government told the US government that it was worried over the anti-Sri Lankan campaign being carried out by the Tamil Nadu media. At one point of time, Karunanidhi, who was the chief minister then, even said that the Indian government’s policy on Sri Lankan Tamils was his government’s policy too. But Sri Lankan Tamils and their supporters would never forgive him for that. Though he demanded a probe by international agencies into the alleged atrocities committed by the Sri Lankan army in Tamil-dominated areas in the island nation, he could never win back the same support from them.

On the other hand, Jayalalithaa latched on to these slip-ups and drove home a thought that Karunanidhi had failed to protect Lankan Tamils against a determined Sri Lankan army. She, too, demanded a global inquiry into the alleged atrocities by the army. The late AIADMK supremo also ensured that the State Assembly passed a resolution demanding an international investigation into the alleged war crimes of the Sri Lankan army. This, some critics saw as a strategy to sway Sri Lankan Tamil supporters to the AIADMK’s side.

As the US cable said, Karunanidhi’s attempts to reassure Tamil Nadu people that he had tried his best through the Government of India to restrain Sri Lanka fell on deaf ears. He was never the same giant again on the Sri Lankan Tamils issue. And probably interred with him were efforts for a separate Tamil Eelam.