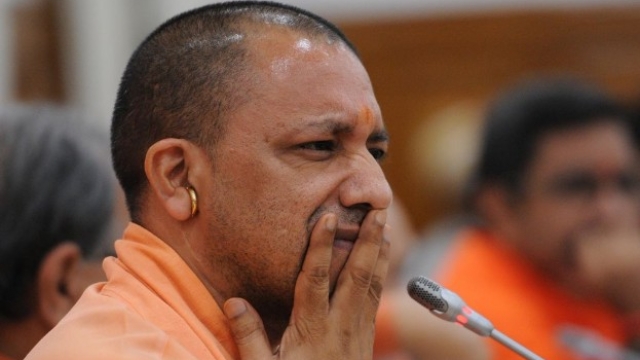 The Hindu Yuva Vahini (HYV) worker begins and ends his analysis of the Gorakhpur by poll results in six words. "Jiske prati aastha thhee, dikh gaya" (it has shown who people have faith in). Words few and measured. Amidst analysis surrounding vote share, alliances, alliance-chemistry, caste and caste calculus that broke through the bastion, "Na Kaabil-e-Shikast Quila", the invincible stronghold, Gorakhpur, the HYV karyakarta in Gorakhpur, drops some silence. He adds, "Jaisa uchit samjha logon ne, waisa kiya." People of Gorakhpur did what they considered appropriate.

According to this report, HYV, which has been behind Yogi Adityanath, as a formidable force for 16 years, making him independent and invincible in Gorakhpur and east UP, was almost invisible in the campaign scene for bypolls. In politics, symbols matter as much as arithmetic, emotions and electoral sways. Absence is as strong a symbol as presence.

The Hindu Yuva Vahini was established by Yogi Adityanath in 2002 to widen its reach and appeal outside the existing Gau Raksha Manch and Gorakhpur. HYV not only provided a formidable support to Yogi Adityanath and his political aspirations and ambitions, but also stood loyally behind ‘Maharaj’. In 2018, it became an ‘outsider' on its own turf and in the local electoral sensibilities.

The impact of HYV's presence in Adityanath's electoral progress was clearly visible in the victory margins, which, over the general elections, grew, since 1998. Adityanath's rise in stature as Uttar Pradesh chief minister resulted in the cornering of HYV -- in dissolution of its units. In 2017, HYV dissolved its Lucknow Mahanagar unit. According to this report, some people were "misusing the name of HYV". More than 2,500 HYV workers resigned from the defunct unit. Lucknow Mahanagar unit in-charge said: “Around 2,500 workers from Lucknow district and Mahanagar units resigned because they felt insulted and ignored. They were also upset over harassment by senior leaders like Pankaj Singh…” Lucknow, Balrampur, Mau, Azamgarh - the drill repeated.

Yogi Adityanath had represented Gorakhpur since 1998 in Lok Sabha until the recent Gorakhpur bypoll, which took place because the spot had to see Adityanath leave for a bigger role - UP's chief minister. Someone else, it is obvious, had to fill the spot. The presence or absence at this spot mattered.

Co-opting castes was and is one of the 'cultural' goals of the Vahini, which has described itself in the past as a non-political, cultural and social organisation. It also had, in the lead up to 2017 assembly elections, backed Bharatiya Janata Party’s (BJP's) efforts to woo and assimilate the Rajbhar community in the electoral feat, and held its own ground to campaign for their leader, 'Maharaj'. They wanted to see him as UP's chief minister long before BJP took the decision (after the results). Yogi Adityanath was made Chief Minister. Following this development, HYV roared in ecstasy, initially. But then, Adityanath was out of the dorm, into a bigger family, out to perform as Chief Minister.

Yogi Adityanath is an emotion for HYV. For them, the word of ‘Maharaj’ - how they address Mahant Yogi Adityanath - is the final word. In 2017, there were reports of disagreements and 'rebellion' within HYV regarding the decision to contest elections. HYV men wanting to contest on tickets from BJP later said that the party was undermining Yogi Adityanath, and he, ignoring them. Some in HYV said that the revolt was not against Adityanath, but a mark of protest against the BJP. One group asserted, its support to the saffron party ‘Maharaj' represents - for the sake of the man and his mission - nationalism, caste assimilation and protection of Hindu culture and symbols. No room for rebellion now.

In the Lucknow matrix, that would pitch Adityanath as the face of changing Uttar Pradesh, and, later, springboard him to BJP's election campaigns in other states, HYV would have to be roped within boundaries and limits, owing to perceptions on its past and present (2017 onward).

Since March 2017, when Yogi Adityanath took over as Uttar Pradesh Chief Minister, questions were raised on the 'growing clout' of HYV, its influence across the state, in carefully placed stories in the media. According to this report, the Rasthriya Swayamsevak Sangh (RSS) 'red-flags' HYV; not too happy with young HYV leaders "flexing muscles" and showing strength on ground; the said and unsaid from leadership in UP. Adityanath's bigger family, colleagues and opposition, saw HVY losing steam.

The right, after all, falls for appropriation, too, but unlike the left, it doesn't know the art of stirring it into a story of emotion, faith and pathos, backgrounds, caste, even for a "cause", its own cause, with the required course correction.

Interestingly, sections of the media who oppose right, RSS, BJP and Prime Minister Narendra Modi in almost all aspects of governance, ideology and ideas, have, since 2017, found immense soft corner for all four, in the backdrop of HYV gaining political feet, volume and numbers. Quoting each other, they say in reports that the RSS is not too happy and has expressed reservation regarding the organisation that "runs parallel" to BJP and RSS on ground.

The Gorakhpur seat, associated with the head of the Gorakhnath math since the early 1960s is the focal point for HYV. The Vahini "finds immense inspiration" in Yogi Adityanath, his life and mode of working. A portrait cutout of Yogi Avaidyanath, Yogi Adityanath's mentor, who won Gorakhpur seat in 1970, is placed on the banner on HYV's Facebook page. On the other side, is a depiction of Lord Ram. The BJP retained Gorakhpur and the symbolic strength since 1991. The bypoll snapped the tradition.

The HYV "will have a word with Yogi Adityanath " on the poll debacle in Gorakhpur. And for them, the word of 'Maharaj' - Mahant Yogi Adityanath - is the final word. "Maharaj wants discipline."

Sometimes, HYV men do their own thing. In January this year, a case was filed against Kamla Prasad Rawat, Samajwadi Party, for making an objectionable comment against CM Adityanath. A complaint was lodged by HYV and a BJP worker. Last year, HYV protested against Rahul Gandhi's dig at RSS and his remarks on women in shorts.

The meteoric rise of Yogi Adityanath's stature outside Gorakhpur, which came in 2017, saw HYV put under scrutiny.

The judgement was quick. Men whose inspiration is a mahant, now a chief minister, would bring him nothing but embarrassment. More judgement. They had to be either brought under control, or be given an ear when they "rebelled". HYV did not disappoint.

Recently, HYV karyakartas walked from Sitapur to Lucknow. Angry over the non action of district administration for 15 days, in Sitapur, where HYV workers had done a sting on an official taking bribe, the karyakartas wanted to meet the CM. They demanded a probe from the city magistrate. According to this report, a local HYV worker said that they would continue to expose corrupt officials in the administration, but, would, in no way, do anything that affects Yogi Adityanath's image as Chief Minister.

HYV's belief in and support for Yogi Adityanath has remained strong. The HYV karyakarta says, "Jab Maharaj aayenge, tab is baare mein baat hogi unse. Logon ki aastha unmein hai, math mein hai. Bas aur nahin kehna." (“When Maharaj comes, then we'll discuss this with him. People have faith in him, in the math. That's it, don't want to say more”). Those who understand Hindi, Hindi heartland and the electoral roller coaster to 2019, would understand his words.