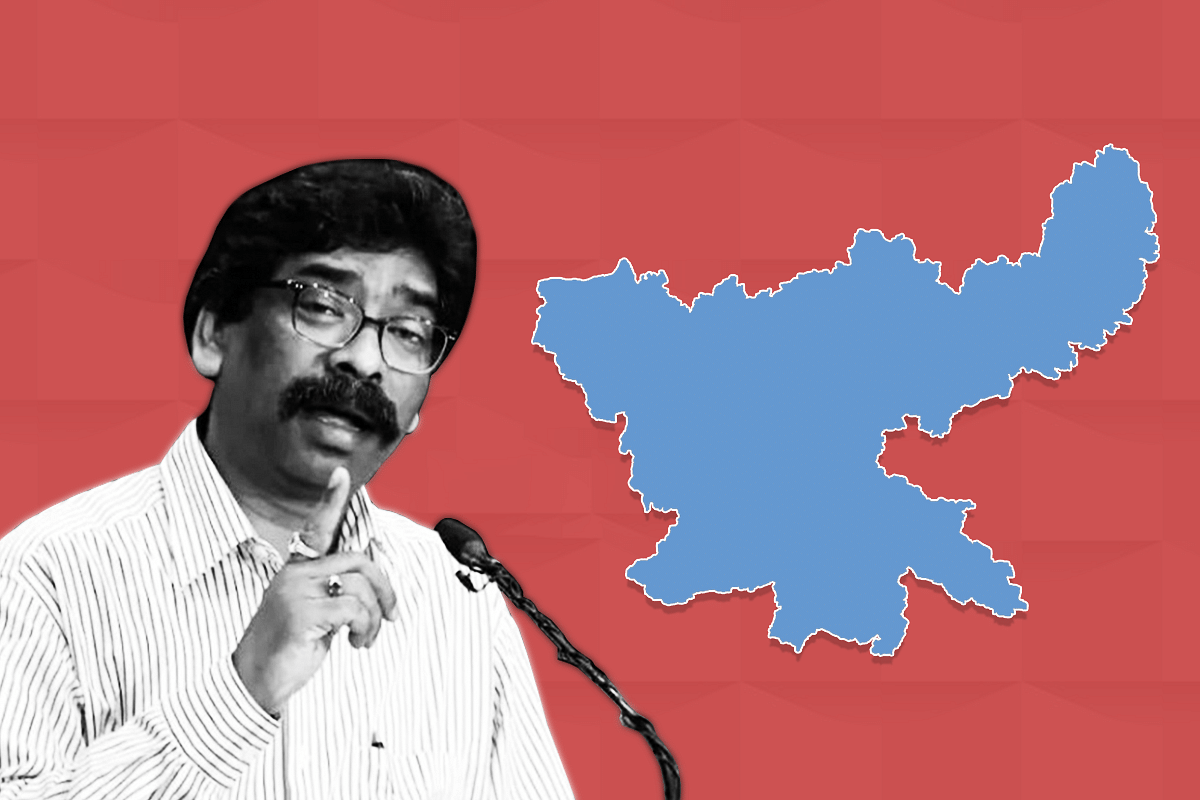 Jharkhand has been plunged into a deep political crisis with Chief Minister Hemant Soren facing grave charges of corruption and wrongdoings. The ruling Jharkhand Mukti Morcha (JMM)-Congress-RJD alliance is bracing for Soren’s probable disqualification as an MLA, and the resulting jockeying for power among the allies and lobbies within the JMM.

Hemant Soren, who is also the JMM working president, had got a lease for mining in 0.88 acres of land in Angara Block of Ranchi a few years ago. He applied for environment clearance on 9 September last year, and the clearance was granted by the State Environment Impact Assessment Authority on 18 September.

The Chief Minister holds both the mining and environment portfolios, and the BJP was quick to charge him with corruption and misuse of office. Though Soren got the mining lease that had been issued to him cancelled once his predecessor and BJP national vice-president Raghubar Das sought his disqualification as an MLA, the damage was done.

The BJP complained to Jharkhand Governor Ramesh Bais, who sought the Election Commission of India’s opinion under Article 192 of the Constitution on whether Soren can be disqualified from membership of the state Assembly. The ECI had sought and received authenticated documents about the mining lease from the state government.

The ECI will now take a call on granting an opportunity to Soren to be heard in the case, as has been demanded by the JMM and its ally--the Congress. The ECI, it is learnt, is examining if the grant of mining licence and the hasty environment clearance granted to him constitutes an offence under the Prevention of Corruption Act and attracts his disqualification from membership of the state Assembly.

Legal experts told Swarajya it is very clear that Soren held an office of profit (as a lessee of government property for carrying out a business for profit) while being an MLA and that constitutes a grave violation of existing rules and norms. Hence, his disqualification is quite probable.

A bench of the Jharkhand High Court comprising Chief Justice Ravi Ranjan and Justice Sujit Narayan Prasad, while hearing a petition on this issue earlier this month, took a dim view of Soren’s alleged misuse of office and termed it a “serious matter”. The High Court has served a notice to Soren and the state government and, say legal experts, if it does not get a satisfactory reply, it may also order an independent enquiry. Also, central agencies like the ED and SFIO are planning a probe into the mining lease to Soren.

“Hemant Soren has been indulging in corrupt practices and misusing his office to grant favours to his relatives and those close to him since he assumed office in December 2019. Giving mining lease and contracts to family members amounts to conflict of interest and a criminal office under the Prevention of Corruption Act,” Raghubar Das told Swarajya.

This mining lease controversy is not the only one that Hemant Soren is being buffeted by. In January this year, Das exposed another case involving Hemant Soren’s younger brother and Dumka MLA Basant Soren. According to Das, Basant Soren operated a company--Grand Mining Company Pvt Ltd--in the Santhal Parganas and illegally exported stone chips to Bangladesh, thereby causing a loss of Rs 8 crore to the state.

“Illegal mining of coal, stone and sand is being carried out by the mafia in the tribal heartland of Santhal Parganas under Basant Soren’s patronage,” said Das. “Hemant Soren did not deliberately auction off sand ghats for mining for the past two years in order to facilitate illegal sand mining. My government had sought letters of intent for this sand mining and had even shortlisted some companies through a transparent process, but this government put that process on hold to allow illegal sand mining,” the former chief minister told Swarajya.

The BJP has also alleged, and produced documents in support of its charges, that the Chief Minister’s media advisor Abhishek Prasad had been granted a stone mining lease on a 11.7 acre plot in Pakariya village of Sahibganj district in April 2021. A similar stone mining lease was also given to the CM’s Assembly representative Pankaj Mishra last year.

Earlier this week, another scandal hit Hemant Soren when Raghubar Das revealed that the state industry department (which Soren also heads) had allotted an 11 acre plot of land at an industrial cluster in the state capital to a private firm--Sohrai Live Pvt Ltd--that belongs to Hemant Soren’s wife Kalpana Soren.

“The government promised to provide industrial plots to tribal youths. But only the Chief Minister’s wife was allotted an 11 acre plot at the Barhe Industrial Park for a meat processing unit. Soren has violated rules under Section 13(2) of the Prevention of Corruption Act which prohibits an incumbent chief minister or minister, or any of their family members, from getting a government lease or contract,” said Das.

The centre is likely to order probes by its agencies into these allegations as well. Das is confident that Soren will be found guilty, and his days as the chief minister of the state are numbered.

The JMM is, understandably, very rattled. The party has rejected the charges against Soren and said no offence had been committed. JMM spokesperson Supriyo Bhattacharya accused the BJP of making false allegations “to create an opportunity for central agencies to step in and destabilise the government”.

The Congress has also rallied behind Soren and has dismissed the charges against him. A Congress spokesperson said that Soren had not committed any impropriety and the mining lease in his name had been cancelled as soon as allegations were raised. He also said that members of the Chief Minister’s family were free to pursue their own business ventures.

But that is all bravado and the JMM’s nervousness is apparent. Governor Ramesh Bais’ meeting with Prime Minister Narendra Modi and Union Home Minister Amit Shah in New Delhi Wednesday (27 April) to apprise them of the “political situation” in the state has clearly rattled the JMM.

Party insiders told Swarajya that disqualification of Hemant Soren would destabilise the government and the process of finding his successor would create deep fissures within the party. Though Hemant Soren’s brother Basant, who is also an MLA, will be the primary claimant for the top post, he is a novice in politics and a first-time MLA without any administrative experience.

Also, a number of JMM veterans, contemporaries of party founder Shibu Soren, will not take very kindly to the elevation of the greenhorn Basant Soren to the CM’s post. A few senior JMM leaders and ministers consider themselves to be the rightful claimants to that post, and will oppose Basant’s elevation.

That will trigger infighting within the JMM and will pave for the BJP to fish in troubled waters. The JMM and Congress fear that a fractious JMM will give the BJP a golden opportunity to create more dissensions and even engineer a split in the JMM. The chances of the JMM-Congress-RJD government collapsing in the event of the Chief Minister’s disqualification are quite high, say political observers.

And that is why the JMM is nervous. Party patriarch Shibu Soren, who is more than 78 years old, is ailing and in no position to hold the party together in case Hemant Soren has to step down from office. The party will then become rudderless and get embroiled in intense infighting.

Political observers say that many JMM old-timers have been unhappy over the anointment of Hemant Soren by his father (popularly called Guruji). They have long felt that many senior leaders have not been adequately rewarded for their sacrifices and contributions. These leaders have been resentful of dynastic politics and will not accept Basant Soren becoming the CM.

Also Read: Revealed: How The Hemant Soren Government In Jharkhand Is Going Soft On Seditious Activities In State