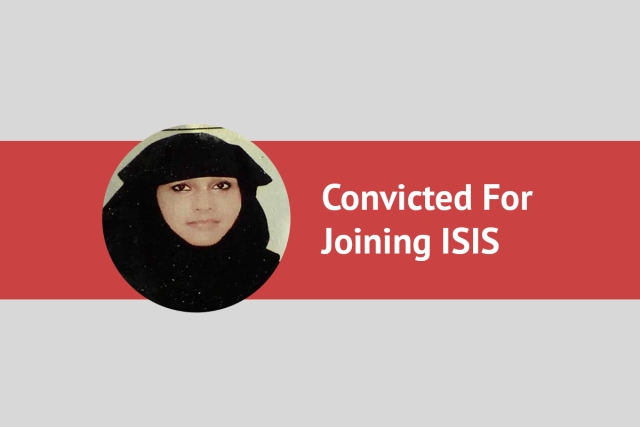 Yasmeen Zahid, the first woman to be convicted for joining ISIS.

On 1 August this year, the Supreme Court convicted a woman — 32-year-old Yasmeen Mohammed Zahid — for being an activist of the Islamic State of Iraq and the Levant (ISIS).

This is the first conviction of a person for their links with ISIS and many have failed to take note of it.

On 30 July 2016 Yasmeen was detained by immigration authorities at the Indira Gandhi International Airport in Delhi when she gave unclear responses to questions on her travel plans. She had been trying to fly out to Afghanistan with her child.

On checking it was found that she was wanted by the Kerala police in the case of the missing people from the Kasaragod district. It was reported that 15 people had joined the ISIS forces in Afghanistan. Most of them were either from Trikaripur or Padanna regions in Kerala’s Kasaragod district.

According to NIA, Yasmeen was subsequently arrested on 1 August 2016.

On 24 August 2016, the NIA filed cases against 16 persons in the Kochi special or trial court. Yasmeen was the only one that the agency could arrest then. Later, they arrested Manseed Mohammed. The rest, including the main accused Abudulla Abdul Rashid, are absconding to this day.

NIA began handling the case after Rashid’s father, P Mohammed, complained to Chandera Police in Kasaragod district that his son was missing along with his wife, Ayesha, and their child. Reports said that 14 other persons had gone missing from nearby regions, resulting in six more complaints being filed with the Chandera police.

NIA’s argument against Yasmeen was that she was influenced and radicalised by pro-jihadi ideology and preaching of Rashid. She had divorced her husband in 2015 and left her workplace in Kollam to relocate to Kasaragod to attend secret, pro-ISIS classes that Rashid conducted.

Rashid then began to assist Yasmeen to migrate to Afghanistan and had stayed with her on two occasions in Bihar, when the woman went to get a passport for her child while renewing her passport. The consent of the child’s father Sayyad Ahammed was not obtained to get the child’s passport, NIA said.

Rashid also helped Yasmeen by providing her funds through his wife Ayesha bank account, to migrate to the ISIS stronghold in Afghanistan.

NIA said that Rashid had undertaken Islamic studies at Al-Quma Arabic College in Colombo, Sri Lanka. The prime accused was expelled from the college along with a few others for advocating violent jihad in support of ISIS.

Another accused in the missing persons case at the Chandera police station — Manseed Mohammed — who was arrested later, had told his friends in Kerala from abroad that Yasmeen was an ISIS activist and her associates had already reached their destination in Afghanistan.

NIA’s case against Yasmeen and her associates was that they had furthered the activities of a proscribed terrorist ISIS organisation that was waging war against nations that were friendly towards India (Section 125 of Indian Penal Code).

It also filed cases of criminal conspiracy (Section 120B of Indian Penal Code) and unlawful activities (Section 38, 39 and 40 of Unlawful Activities {Prevention} Act, 1967).

Yasmeen moved the Kerala High Court in appeal against the NIA court judgment.

A two-judge bench of the court said that the prosecution had not proved that Yasmeen had waged a war or attempted to abet such a war against an Asiatic power but it conceded that she supported ISIS. The judges dismissed other charges against her as not maintainable.

The bench took a lenient view since ‘she was not the first who had started to propagate the ISIS ideology.’ It commuted earlier sentences to lesser time and even set off prison time against the time she had already spent in custody.

Both Yasmeen and the NIA then appealed against this ruling in the Supreme Court. Yasmeen wanted the punishment to be set aside, while NIA wanted the sentence of the trial court in Kochi to be upheld.

A two-judge bench of the Supreme Court heard the appeals, and ruled that evidence unearthed from Yasmeen, including videos, and the fact that she was trying to go to Afghanistan pointed to the existence of mens rea (the mental state of a person’s intention to commit crime).

The judges upheld her conviction under Sec 120B and Sec 38 of UAPA but let her off the hook for some other charges.

The judges, however, differed with the High Court’s lenient view of the crime committed by the accused.

They said that the intensity of her participation and involvement had clearly been made out by the prosecution. “In the circumstances, there is no room for invoking sympathetic considerations,” they said.

Yasmeen will now need to serve the remaining imprisonment period of four years.

This case could set the template for NIA in tackling other similar cases that it is fighting in various courts across the country.