Life Under Lockdown: UP Man Yearns To Meet Nephew And Niece In Delhi, Who Were Rendered Orphans After ‘Khyala Triple Murder’ 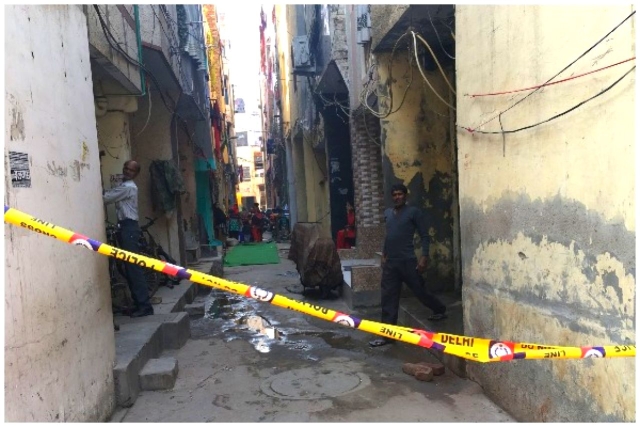 A view of the colony in which the murders took place. Picture clicked in January 2019.

The ongoing country-wide lockdown over fears of coronavirus pandemic, that is said to have originated from China, has thrown life into disarray and brought up unprecedented obstacles in one’s daily, routine life.

For those hit with personal tragedies, the pandemic has arrived as another blow.

Here’s an account of one such family. Remember the infamous ‘Khyala triple murder’ case?

A year ago, a man stabbed three members of a neighbouring family to death in west Delhi in full public view. The gory act was recorded in a mobile phone and went viral.

Eye-witnesses told this correspondent that at that time Aakash had kicked at Azad’s door, loudly demanding why Azad abused his mother, saying he needed a “faisla” [decision] to the recurring fights.

Azad had emerged from his house with a meat chopper and stabbed Aakash. "A chunk of his flesh fell down," a neighbour, Sonia, said. Azad had then dragged his parents out on the street and stabbed so hard that their intestines came out.

The incident took place on the evening of 16 January 2019. Most publications called it ‘Khyala triple murder’ case.

The couple was survived by a 20-year-old daughter, Khushboo, who had married only six months ago, and two minor children – a girl and a boy. The family had been living in the colony on rent.

After the tragedy, Khushboo had come to live with her two siblings for some time. Sonu Kalra, owner of the flat rented to Veerpal's family, said at that time he wouldn't charge rent until the family gathers itself.

Sunita’s brothers Ghanshyam and Arjun, both residents of Uttar Pradesh, were among the close relatives who had helped with the last rites. They had stayed in Delhi till the children were admitted to a residential school by the Delhi government. A local businessman, Sushil Gupta, had raised around Rs 50,000 from the local market that helped the family pass the initial phase.

The police had helped open bank accounts for the minor children, publicising it in the media.

Arjun told this correspondent that around Rs 18 lakh was thus raised through the public, which the children would be able to use when they become major. Arjun’s mother – that is the children’s maternal grandmother – was made their legal guardian.

This case received wide attention of the media and of the public for the gory nature of it, and the life-shattering loss caused to the family. However, as what happens with most cases, the media moved on.

Here’s what has happened to the family in these months: Khushboo died a few months later. All that the neighbours told this correspondent in May, when she died, was that she had been depressed.

The orphaned children stay in a Don Bosco school in Delhi. One of their maternal uncles, Arjun Singh, visits them when he comes to Delhi from Mathura for court hearings. The visits are a financial drain on him. “It costs me around Rs 1500-2000 each time, on travel and stay. This means I don’t save even a penny anymore,” he told this correspondent.

Arjun is a daily wager, and is a married man with three children. His deceased brother-in-law Veerpal too was a labourer like him, who worked in a cloth factory near Khyala and made just about enough to pay the modest monthly rent of around Rs 5,000.

Neighbours had said at that time that Veerpal’s family was so poor that they had to pull out Saahil – Aakash’s 11-year-old younger brother – from school.

Arjun was scheduled to come to Delhi on 24 March for a fresh hearing. That was when he had promised to visit his nephew and niece too.

As it turned out, far from taking the long journey to Delhi, Arjun cannot leave home or work – just like crores of people across the country. The Delhi High Court and subordinate courts have suspended functioning until 4 April.

That is only part of the story. Arjun is hit by the lockdown so hard that he has no money to even make a phone call to the children or, for that matter, take care of his own family.

On the evening of 25 March, this correspondent received a WhatsApp message from him.

Got this message today evening. You know who he is?
He is uncle of children rendered orphans after 'Khyala triple murder'. Remember the case?

Help given. Sharing this with consent and only because it's a story waiting to be told - what happened to that family. Will write. pic.twitter.com/56WaUfropj

The message said that he urgently wanted some money as he has fallen on really bad times and did not have money to even make a phone call. The message said his children are ill.

On Thursday, when this correspondent called him up, Arjun said he could not talk as he was on his way to a hospital.