Most Critiques Of Farm Reforms Are Bunkum: Here’s How To Make Them Work For All Stakeholders 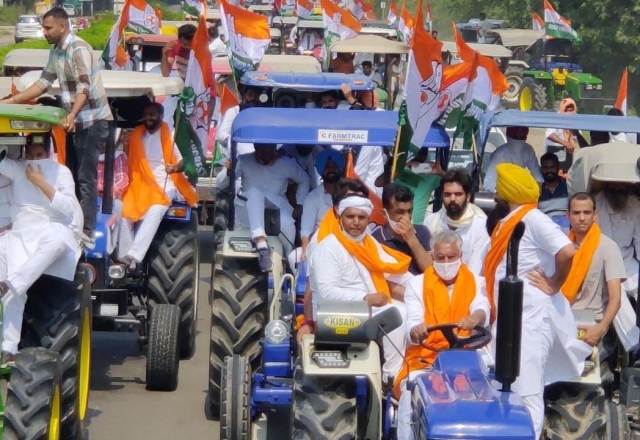 A tiger brought up in captivity is not likely to take easily to the jungle even if set free one fine day.

This, in essence, explains all the farmer protests in some parts of the country, mostly Punjab and Haryana, against the new laws passed by Parliament to end the monopoly of the Agricultural Produce Marketing Committee (APMC) mandis.

Even though the government has repeatedly assured farmers that the Minimum Support Price (MSP) mechanism is not being ended, the protests have not moderated.

The protests are really about imagined fears in the farming community about this brave new world, which is why Opposition parties have been quick to fan those fears for political dividends.

The Indian farmer is, for the first time, being told to go and try walking without crutches after being reduced to a zombie with regular drip-feeds by a generous state.

Subsidies line every side of the farm business, from fertilizers to seeds, power, diesel, water, and credit, not to speak of the ultimate profit guarantee in the form of the MSP.

As for credit, more often than not, they don’t even get repaid.

None of these props are going anytime soon, and yet, farmers are told they have reason to fear the future merely because they now have additional avenues for selling their produce beyond the mandi.

Why is freedom sounding like a threat to farmers? Three primary objections have been raised by experts in the media.

These go something like this. 1) Why weren’t states taken into confidence and a consensus built for the new laws? 2) If MSP is to stay, why not legislate a guarantee that it will stay forever? And 3) corporates will take advantage of weak farmers to exploit them.

These objections seem reasonable at first glance, but none actually hold water on closer examination.

Yes, it should have been possible to waste two years to build a consensus on farm reforms, but this assumes that a negotiated compromise will actually be better than an uncompromised and simple law.

Consider how complicated our GST law is, which was built on the basis of a messy give-and-take with states.

Today, those same states can claim the Centre messed up on GST, but will not accept that they too contributed to it.

So, no, taking time to generate a political compromise actually means that either the law will be a nightmare to implement, or will not the serve the purpose for which it was drawn up, or will remain stuck forever in Parliament.

Consider what happened to the land acquisition law amendments in 2014. It has not emerged from the graveyard of political haggling in a select committee.

The political reality is that the window of opportunity for farm reforms would have closed soon, once we get into a series of major elections starting from 2021 and going right up to 2024.

The second objection, why not assure farmers that MSP will always be available to all, seems weightier — but is actually the weakest of them all.

No law that goes against market forces can be guaranteed to all people at all times.

That is the surest way to bankrupt the state. This is as true of the Mahatma Gandhi National Rural Employment Guarantee Act (MGNREGA) as the MSP.

The MGNREGA is available for all of 100 days a year, and that too to only one member in each household.

If extended to all adults for all time and all districts, it would certainly bankrupt the state.

Also, MGNREGA has two basic aims: to provide a safety net for those who cannot find jobs in the off season in rural areas, and to hold up the base wage rates.

What MGNREGA ensures is wage contestability, which allows part-time workers to get wages that are close to minimum wages.

It is not meant to be a permanent unemployment allowance or employment scheme.

Ditto for MSP. It is meant to create a rough floor price for some critical agricultural crops, not a permanent income guarantee scheme for farmers in Punjab and Haryana.

Even now, MSPs do not protect all farmers all the time from price crashes; what they do is prevent excess distress selling, except in prime catchment areas like the rice bowl of Punjab, Haryana and Western UP.

This role, of providing a floor for prices, will remain in the foreseeable future.

Another point is also worth making: it is not necessary to give everyone MSP all the time.

If this were the case, there would be no incentive for farmers to cut costs and raise productivity.

When they do raise productivity per acre, farmers can earn more, even if they sell below MSP. They will earn from volumes what they can’t from higher margins.

This is the basis on which all economies of scale work.

The third point, that power will now shift towards corporates, has some element of truth to it, especially since big retailers and food products companies can impose their price on weak farmers.

But the effective counter to this is the creation of producers’ cooperatives, or producer associations.

The power of the corporate can be countered by the creation of farmer-owned corporations, where individual farmers obtain shares in the larger corporatised entity, which can then own and authorise branding of products.

This is what Amul, or Aavin or Nandini are about in the milk products business.

When Indian farmers band together, possible aided by the state, they can wield countervailing power.

They can also build and own their own brands (whether by acquiring geographical indication tags like Surti Kolam or Shihor wheat, or by forward integration into packed foods).

They can progress from being mere commodity producers to brand owners.

The best way to fight the fear of big corporations exploiting the poor small and marginal farmer (who account for 86 per cent of total land ownership) is to get an Amul or Nafed to start farmers’ organisations and offer their own brand power for use in food products beyond milk products.

Consider the pricing power of an Amul Basmati or Amul Wheat Puffs. Of course, the scope for the creation of new farm product brands is enormous.

This is what the big farmers will do anyway. The small ones need state support to start the process of consolidating their output and gaining higher margins from forward integration and branding.

The arthiyas and commission agents who see their livelihoods threatened by farm reforms can even be encouraged to be the motive force behind the aggregation of small farms into larger corporate entities.

They have the needed entrepreneurial drive to corporatise small farm holdings, though the state may need to ensure that they don’t enter into a new exploitative relationship with small farmers.

This is a win-win situation for all, if handled intelligently.