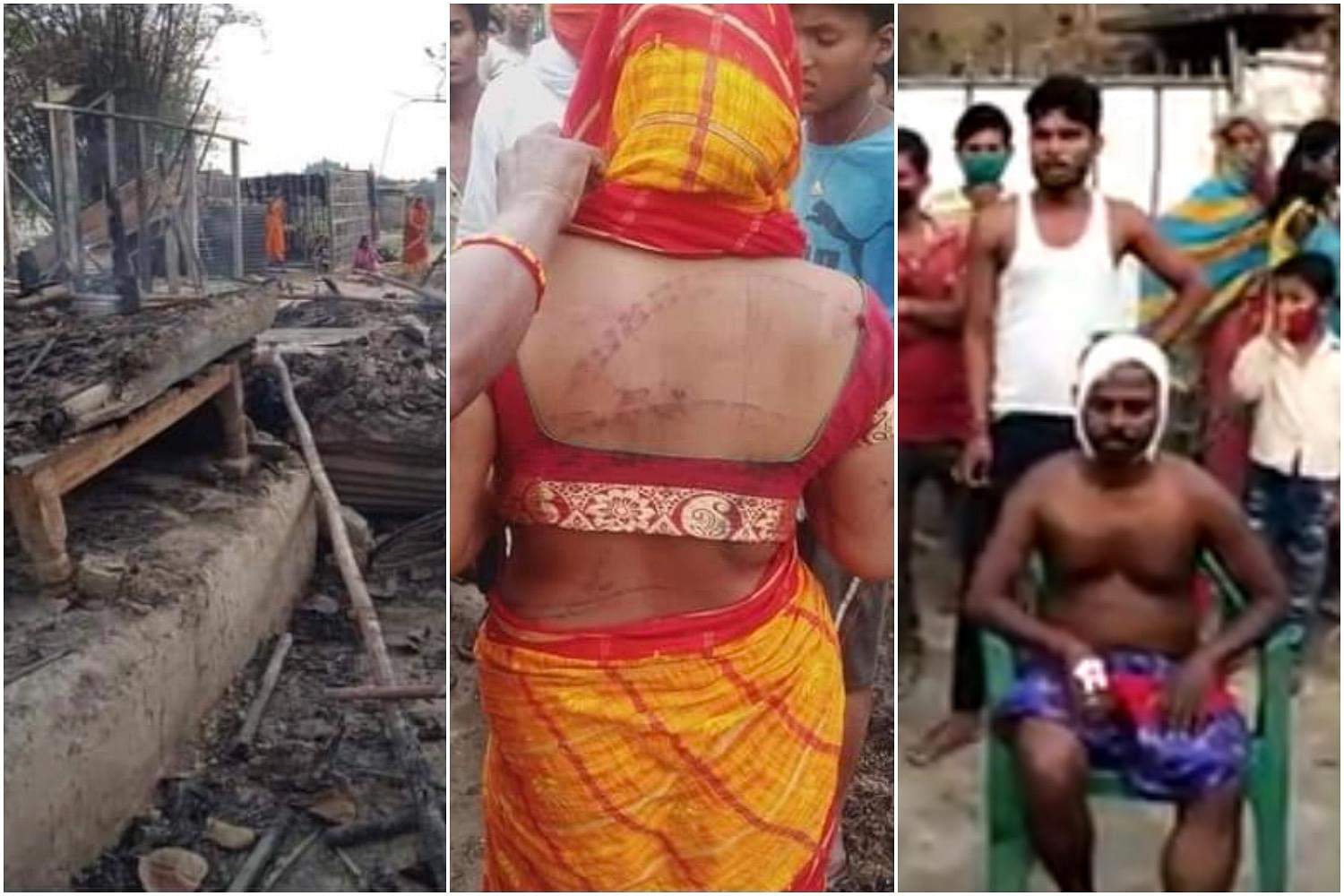 Some pictures after the violence. These are stills from video testimonies received from local activists and journalists

Amid the deadly Coronavirus pandemic when citizens are being repeatedly told to stay inside homes unless unavoidable, dozens of families have been rendered homeless in Bihar’s Purnia following communal violence.

The victims, all Hindus belonging to mahadalit jaatis, were attacked by a raging Muslim mob. Their houses were set on fire; a man was killed.

The national English media, true to its legacy of playing down all forms of Muslim extremism, has largely ignored the tragedy.

On social media, videos of the fire, and testimonies of victims recorded by local journalists, are, however, circulating.

The Purnia administration has announced monetary compensation for victims in accordance with the Scheduled Castes and Scheduled Tribes (Prevention of Atrocities) Act, loosely called SC/ST Act.

The incident took place in Niyamatpur Majhwa village, which falls in Khapra panchayat and jurisdiction of Baisi police station in Bihar’s Purnia district, around 11 pm on 19 May.

A statement by the Collectorate, Purnia, says around 100-150 people attacked 13 houses of a scheduled caste tola.

The houses stood on a land owned by the Bihar government. The mob hurled abuses at and physically attacked the residents, and set fire to the houses, the statement says.

Three first information reports (FIRs) had been filed at Baisi thana and two suspects had been arrested by the time the statement was released.

Although it did not name the arrested persons, a police officer told Swarajya they are Sakir Alam and Asad Alam.

The arrests made in #Purniaviolence so far. FIR number 130/21 was filed previously on 24 April. In fresh violence on 19 May night, three FIRs have been filed - 146, 147 and 148 at Baisi police station pic.twitter.com/ls9aQrGPwF

The complaint says that Dinesh has been guarding the basti since a scuffle broke out between two groups of residents on 24 April. On the evening of 19 May around 6, Iliyas and Rizvi again entered into a spat with some residents of harijan tola. The two men were soon joined by others including Mukhtar, Muzaffar, Ayub, Shakir, Asad and Azam.

The group carried swords and sticks. Dinesh, and the other policemen on duty, intervened and resolved the dispute. They informed the police station about it while everyone returned to their homes.

Around 11 pm, Dinesh and another constable, Bharat Rai, were patrolling in the area when a mob of 100-150 people arrived. They carried petrol, bricks and swords.

The mob hurled casteist slurs at the constables, and went on to attack the houses. The mob tore Dinesh’s uniform and set his bike on fire. While Bharat managed to escape, Dinesh could not. Dinesh got hit by a sword on his head and sustained injuries.

The complaint says that on the evening of 19 may, Iliyas and Rizvi entered into a spat with him and his brother over a land dispute. The matter was resolved and everyone returned to their homes. Around 11 pm, Iliyas and Rizvi arrived with a mob that included Nazmul, Ayub, Kyum, Azad, Abu-kalam, Sakir, Asad, Ibrahim and Tanveer.

They hurled casteist slurs at residents and assaulted them. They began vandalising properties. While Fakira and his brother Sundarlal managed to escape, their father Newalal, owing to old age, could not.

The mob hit the old man repeatedly, which eventually led to his death. The mob molested the women of the harijan basti too, and snatched their jewellery. Houses of several residents, including Bheem Prashad, Malti Devi, Munna Rai, Dashrath Rai, Jitan Rai, Pinki Devi, Jyotish Rai, Dhanvanti Devi, Ashok Kumar and Bachhan Rai, were set on fire. Jyotish Rao faced an additional loss of Rs 50000 cash kept in his house. The statement says that Newalal is a retired chowkidar (constable) and the family was dependent on his pension.

This complaint, too, says that Iliyas and Rizvi, who entered into a spat with Newalal and his sons in the evening, gathered with a mob at night. The complaint additionally says that a three-year-old child went missing in the violence.

The Collectorate, in their statement, however said that on investigation, the child was found safe with his parents.

Relief given under SC/ST act

The statement further says that the land at the centre of the dispute was allotted to 46 families under a mahadalit development scheme in 2010. Seven of the 13 affected families are included in this list. The rest would be provided with land now.

Documents show that the two sides – Muslims and Dalits - have been fighting over a piece of land for long.

On 24 April, an FIR (number 130/2021) was filed at Baisi police thana by a 35-year-old woman named Lakhi Devi from the Dalit side against 13 men from the Muslim side. The complaint said that the group entered her house, tore off her clothes, molested her and tried to set her house on fire. The FIR, however, skipped mentioning the motive of the alleged attack.

A counter FIR (number 131/2021) was filed by the Muslim side against 30 people from the Dalit side the same day. The complaint, by 42-year-old Mohammed Shakir, said that some people began to build a house on land owned by his family. When he objected, several men from the Dalit side assaulted him and tore off the clothes of his wife and molested her.

An official in Purnia administration privy to the case told this correspondent that no arrests were made after the 24 April incident, and some constables were posted in the basti to prevent skirmishes.

This correspondent has not been able to talk to the affected families over the phone yet, as they are currently struggling with makeshift arrangements for stay and food. Once we are able to, we will present a report on the nature of the dispute that led to the arson on 19 May.

You can watch statements by several victims in this Twitter thread, recorded by a local journalist

Posting some video statements of victims of communal violence in Bihar's Purnia, where about a dozen houses belonging to mahadalits were set on fire on night of 19 May. At least one person killed. Recorded by a local journalist pic.twitter.com/vKPxLSEHVz