Naga Poll Boycott Poses A Tough Challenge For The Centre 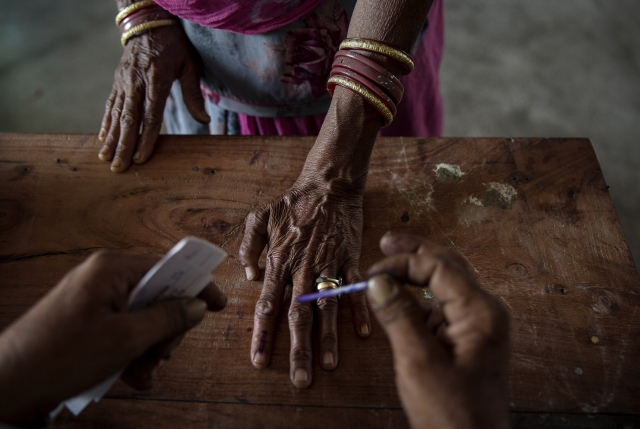 An Indian woman has her finger inked by an elections worker before voting at a polling station. (Kevin Frayer/Getty Images)

The decision by all political parties of Nagaland to boycott the assembly polls in the state, scheduled for 27 February, poses a major challenge for the Union government. The parties have decided to boycott the polls till a solution to the decades-old Naga issue emerges. But evolving a solution acceptable to all is quite a tough task and fraught with pitfalls that can have grave consequences for the entire North East.

The poll boycott decision was expected, and is understandable. Negotiations between the Union government and the National Socialist Council of Nagaland (NSCN) faction led by Thuingaleng Muivah, as well as other groups have been dragging on since 1997, when the militant outfit signed a ceasefire agreement with New Delhi. Since then, numerous rounds of talks have been held, but a final solution has remained evasive. It is, thus, understandable for the Naga polity to lose its patience over the interminable talks and demand a final outcome now.

Many Naga political and community groups, including the influential Naga Hoho (the apex body of elders of all the Naga tribes), have been demanding that the elections to the assembly be set aside till a solution to the Naga issue is found. It was only expected for the political parties to pay heed to this widespread demand of the Naga people and stay away from the poll process. Not to do so would have earned them the ire of the masses.

Arriving at a final solution is, however, not easy. That is because the NSCN and other Naga political groups have been insisting on their demand for ‘Nagalim’ – the political and administrative integration of all Naga-inhabited areas of the neighbouring states of Arunachal Pradesh, Manipur and Assam – with the existing state of Nagaland. None of the three states are willing to part with even an inch of their territory and have seen violent protests (which have cost lives) over even baseless rumours of New Delhi giving in to the Nagas’ demand. Assam, Manipur and Arunachal Pradesh will be rocked by prolonged violence and strife if they are to lose even a slice of their lands. All the three states are now ruled by the Bharatiya Janata Party (BJP), which is also a constituent of the Naga People’s Front (NPF)-led ruling coalition in Nagaland.

NSCN general secretary Muivah is reportedly unwilling to back down from the Nagalim demand. “If Muivah gives up the demand for Nagalim, he will have nothing much to show to his people. The Nagas will want to know then why so many lives were sacrificed if, ultimately, even the dream of Nagalim, the dream of all Nagas spread over different states to live as one, has been surrendered,” explained a leader of the ruling NPF.

Muivah’s personal ambition is also tied closely to this demand for Nagalim. Muivah belongs to the Tangkhul tribe, which inhabits the Ukhrul district of Manipur. Having given up the demand for Naga sovereignty, Muivah can at best hope for a Nagaland within India with some degree of autonomy and some distinct symbols like its flag. At this evening of his life, he would like to be the head of such a state. But he cannot hope to get elected from any constituency of present-day Nagaland given the existing fierce tribal loyalties; no tribe in Nagaland would give up a seat within its area of influence to a Naga from another tribe. Muivah’s only hope to get elected is from his native Ukhrul, and if that part of Manipur is not integrated with Nagaland, his personal ambition to become the administrative head of Nagaland will never come true.

Another tricky area that could be impeding a final settlement of the Naga issue is autonomy. The two sides, it appears, cannot agree on the degree of autonomy to be accorded to Nagaland. While the Nagas want complete autonomy in all areas, and limited autonomy in defence (like having a say in the quantum of Indian defence forces to be stationed in Nagaland) and foreign relations, New Delhi is unwilling to concede to this demand. Agreeing to such a degree of autonomy could spark similar demands from other states and have a direct bearing on Kashmir. There is, thus, no way that anything close to the degree of autonomy being demanded by the Nagas will be conceded.

And then there is the other faction of the NSCN that was led by the late S S Khaplang. This group, based now in Myanmar, withdrew unilaterally from the ceasefire agreement in March 2015 and has, since then, carried out deadly ambushes on Indian armed forces. Khaplang, who died in June last year, was instrumental in the formation of the United National Liberation Front of Western Southeast Asia (UNLFW) that is proving to be a headache for the security forces in some parts of the region. The UNLFW, especially its major constituent – the ULFA (Independent) – and its leader Paresh Baruah, is being sheltered and aided by China.

It is at China’s behest that Myanmar entered into an agreement with the NSCN (Khaplang) under which Myanmarese forces would not carry out operations against the Naga insurgents, and Naga areas in that country would be granted a degree of autonomy. Thus, with a strong base in Myanmar and the blessings of China, the NSCN(K) is in no mood to smoke the peace pipe with New Delhi. And till that faction of the NSCN agrees to come to the negotiating table and hammer out a final settlement, the Naga issue will continue to hang fire. As things stand now, the prospect of the renegade Khaplang faction joining the ongoing peace process and being a party to a solution for the Naga issue is very slim.

The boycott of the polls also presents a constitutional dilemma for the Union government. The term of the present assembly expires on 13 March and if the new assembly (the thirteenth) is not in place by then, Nagaland will be plunged into a constitutional crisis. New Delhi would then have to impose President’s Rule and the state will have to be ruled by the Governor. This is not a desirable arrangement and the Congress as well as other opposition parties can play foul.

The best bet for New Delhi, therefore, is to convince Nagaland’s tribal and civil society bodies to allow the elections to take place while, at the same time, remove the veil of secrecy that shrouds the ongoing peace talks. It is this veil that has led to widespread misgivings and doubts among the Nagas. To conduct the talks as openly and transparently as possible would restore legitimacy to it and provide reassurance to the Nagas that the talks are progressing positively. The Nagas want peace, but they also do not want the sacrifices made by so many of their forefathers to go in vain.