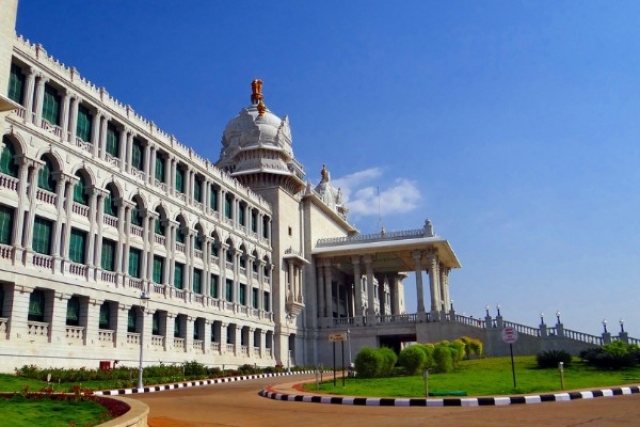 Pictured here is the Suvarna Vidhana Soudha, a legislative building in north Karnataka.

In 1982, Karnataka farmers under the umbrella of Karnataka Rajya Raitha Sangha observed a “Nargund Bandaya” to protest against inequitable development of the state. They had risen up against the step-motherly treatment meted out to north Karnataka. Since then, the murmurs of inequality have been heard regularly. The sentiment now is, “stop romancing Bengaluru, give us our share of development or give us independence”.

Despite 62 years since the state’s formation, northern Karnataka is still known in erstwhile regional terms of Mumbai-Karnataka and Hyderabad-Karnataka. Legislators, top bureaucrats, and even chief ministers are no exception as they use it in the floor of the assembly.

“This is a mental block among our politicians and bureaucrats. They are not able to see beyond this narrative. Former chief minister Veerendra Patil on many occasions had expressed his dismay over these terms and wanted politicians to understand the kind of insecurity they were creating for the North Karnataka region,” says Vijaykumar Patil, an octogenarian from Dharwad.

Unfortunately, Jagadish Shettar and the late N Dharam Singh, who were chief ministers from the region, did not display the same sentiment as Patil.

There are various reasons for the disconnect between north and south Karnataka, especially in terms of development with regard to Hyderabad-Karnataka. This part comprised Bidar, Gulbarga, and Raichur districts, besides the newly carved out districts of Yadgir (formed from Gulbarga) and Koppal (carved from Raichur), under the Nizam’s rule in Hyderabad till September 1948. The Nizam had a typical way of looking at development and stressed more on agriculture with the Zamindari system that gave way to feudalistic tendencies. This sort of system kept the common man away from education. Even irrigation was overlooked, and farmers had to depend more on the monsoon that played truant regularly. This gave rise to underemployment, and farmers started migrating to cities like Hyderabad and Mumbai, where they took up employment. It is for the same reason that the Upper Krishna project took 30 years to complete, after having been initiated by former prime minister Lal Bahadur Shastri.

On the other side, in south Karnataka, major water projects like Krishnarajasagar in Mandya district and Hemavathi in Hassan district and Sharavati projects were completed on time. This was possible because of administrators like Mirza Ismail under the rulers of Mysuru state and visionary chief ministers like Kengal Hanumanthaiah, who was aided by M Visvesvaraya, the chief engineer of Mysuru state.

The Hyderabad-Karnataka region is the country’s second-largest arid region after Rajasthan. Farmers in the region cultivate horticultural crops that are less water- intensive. Chandragowda Patil, Vijayapura district president of the Karnataka Rajya Raitha Sangha, says there have been no efforts by politicians and governments in the past to introduce a wider canal system to get water to the arid areas of north Karnataka despite two major river projects, involving Tungabhadra and Krishna, being completed. “There is already a model of canal system in Mysuru and Mandya districts which has paved the way for the development of southern Karnataka in a big way. They should have at least taken that model for development of north Karnataka region,” he said.

North Karnataka people are also piqued over the state capital being far away from them. It takes at least 16-18 hours to reach Bengaluru with the poor travel conditions. Bengaluru has become so expensive that a regular farmer cannot afford to find accommodation at a reasonable cost and all services including transport and legal, or any other expense, are out of the reach of the average person from north Karnataka. “Why should there be only one capital city for the state? Who made this rule? Can’t there be two power centres under the decentralisation of administration? Do you know how many years we struggled to get a High Court bench in north Karnataka?” asks B V Mallikarjuna, an advocate in Kalaburgi.

The 13 districts in North Karnataka have not received in 10 years what Bengaluru alone has gotten in a year. “We do not know why politicians romance Bengaluru so much! According to the budgetary allocations in 2017-18, Bengaluru got over Rs 1,500 crore for development, while the entire north Karnataka got Rs 1,300 crore at Rs 100 crore per district. This is just peanuts,” say an office-bearer of Karnataka Chambers of Commerce and Industry. To cover up their inability to get the government to release money for the development of the region, politicians have raised issues like Kannada, poverty, religion, and culture, which has pushed development to the back burner.

“In fact, Hubballi’s revenue generation is next only to Bengaluru, but still we get nothing more than the other district gets in terms of development. I am sure planners in cities like Mysuru, Mangaluru, Belagavi, Gulburga could be feeling the same against government’s immense love for Bengaluru and neglect of other districts,” says Ramesh Patil, former president of the Chamber of Commerce.

There are obvious disparities in development of north and south Karnataka between 1980 and 2008. The net state domestic product during the period showed a clear difference in human development. While Kalaburagi, Koppal, and Yadagir districts have recorded the highest increase in human development in the state, they are still at the bottom of the Human Development Index. This is despite leaders like Mallikarjuna Kharge representing it from the 1970s.

According to the Human Development Index, 96.92 per cent of Kalaburgi and 100 per cent of Yadgir district village panchayats are below state average. This is in sharp contrast with southern districts like Bengaluru Urban, Dakshina Kannada, Udupi, and Mysuru.

According to a study made by researchers Siddalingaswami H and Raghavendra V K of the Centre for Multi-disciplinary Development Research (CMDR), Dharwad, the per-capita income of Karnataka was Rs 11,186 in 1990-91 and it increased to Rs 29,729 in 2007-08, up over two and a half times. But the income has not been evenly distributed among the districts and divisions.

South Karnataka region has more high-ranking districts than the north. Except Ballari, the remaining four districts of Kalaburagi division have the lowest ranks in the state.  The disparities between the north and the south have widened, but no organisation has analysed this in the last 10 years.

Again, other fields such as education, farming, and irrigation also throw up similar regional disparities.

“Due to Karnataka government’s singular approach (of promoting Bengaluru), Karnataka does not have the second or alternative growth centre. Everything is centred around the capital,” says Patil, former president of the Chamber of Commerce. Critics of the approach point out how other states like Maharashtra, Kerala, Andhra Pradesh, Madhya Pradesh, and Tamil Nadu have been promoting different cities. “The genesis of the north Karnataka problem is in the government’s wrong approach,” says a critic, not wanting to identify.