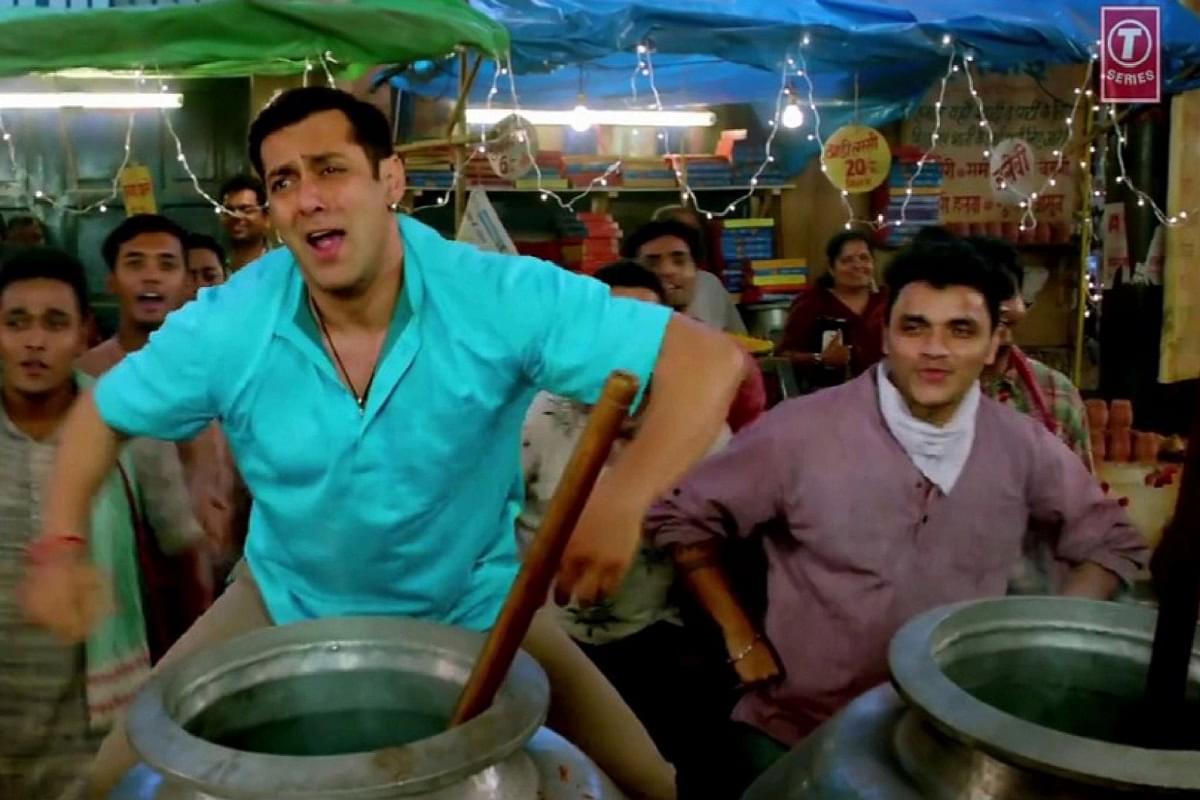 A still from the movie song.

Filmmaker Kabir Khan has made a revelation regarding a song in his 2015 film Bajrangi Bhaijaan.

In a recent interview to a website, Kabir Khan said that the song Chicken Kuk-Doo-Koo was a political statement by him on “beef ban” in India even though it looked like an innocuous children’s song.

The film, directed and written (screenplay) by Kabir Khan and featuring Salman Khan and Kareena Kapoor Khan in the lead, tells a fictional tale of a Pakistani girl separated from her parents and left stranded in India. An Indian man, played by Salman Khan, travels to Pakistan to reunite the girl with her parents.

The song appears when the girl, who is mute and called ‘Munni’ by Salman’s character Pawan Kumar Chaturvedi, wishes to eat meat.

Chaturvedi initially finds the request unpalatable as he is a staunch vegetarian — and his vegetarianism is inspired by religious reasons — but comes around when his girlfriend Rasika (Kareena) convinces him to let Munni eat meat at a dhaba.

Later in the film, Munni is revealed to be a Muslim girl named Shahida Aziz, named after Pakistani cricketer Shahid Afridi, from the Pakistan side of Kashmir. She had come to New Delhi’s Nizamuddin Auliya dargah with her parents, but had separated from them by accident.

What The Song Says

The lyrics of the song, sung by Salman’s character, says:

(At the Chaudhary dhaba in Chandi Chowk area of New Delhi, there is a lot of rush, be it day or night. Half of the menu is vegetarian while the rest is non-vegetarian. Tell them what you intend to eat)

(Order whatever you want, be it naan or chapati, or different dishes of mutton, but hurry up for Lord Ram’s sake. Bring the meat dishes, let my religion be destroyed)

(Bring the meat dishes, even if that means the sacred Hindu fasts are broken).

What Kabir Khan Said About His ‘Politics’

Kabir, who shifted from documentaries to films with his directorial debut Kabul Express in 2006, told the interviewer that in writing scripts or screenplay, “intention is everything” (“neeyat hi sab kuch hai”).

He said, “For me the politics of the film is very important… I have often heard — and I get very worried when I hear this — people in the industry say we are not interested in politics or we are apolitical... As human beings you cannot be apolitical… The way we frame a character is telling our politics. The words and lines our characters are speaking is telling our politics. You are revealing something about your ideology with every word and every shot in your film… Sometimes saying apolitical only reeks of your privilege…”.

Kabir went on to cite the Chicken Kuk-Doo-Koo song as a “classic example” of the point he was making.

“The chicken song at face value is the most popular song among kids because of the way Salman and Kareena are dancing. But it’s also the most political song of the film because it came in the face of beef ban. The song is basically saying, this is Chaudhary dhaba, which is a metaphor for India, half the menu is vegetarian, and the other half is non-vegetarian. You decide what you want to eat and all of us sit together and eat. That’s the way you slip in your politics”.

The Bigotry In The Song

Preaching to non-Muslims in India about tolerance to meat is laughable. Look around, a large number of restaurants and dhabas serving meat are run by Hindus. A large number of their customers are Hindus. Those who do not wish to eat at places that serve meat, eat at vegetarian restaurants and dhabas, that display this speciality on their signboards.

The country has no history of religiously vegetarian groups that include certain caste groups of Hindus, Jains and some sects of Buddhists, prohibiting Muslims from eating chicken or mutton or closing down eateries serving the meat.

On the other hand, there are many cases of non-Muslim vegetarian women subjected to forceful eating of meat as a mandatory ritual accompanying their conversion to Islam.

The song makes open mockery of religious beliefs of vegetarians and seems to be a deliberate attempt to influence impressionable children from devout families into eating meat.

The song shows meat-eating as an act of mutual religious respect, suggesting that communal tension between Muslims and non-Muslims, particularly the majority Hindus, will cease to exist if the latter adopts the meat-eating ways of the former.

This is in line with the age-old propaganda by Islamists of cheering one-way religious respect while scoffing at all ways and manners of “kafirs”.

In Bollywood, hardly any film shows a Muslim character praying in Hindu and Jain temples or gurudwaras, but scores of films have shown Hindus and Sikhs praying in mosques and at mazaars. Hardly any film shows Muslim characters chanting the name of deities such as Ram, Krishna, Mahavir or Buddha, but scores of films show Hindus and Sikhs singing praises of “Ali”, “Allah” and “Maula”.

Bajrangi Bhaijaan shows Pakistanis as great souls who observe absolute equality in mosques and whole-heartedly try to help a Hindu in his pursuit even as saffron flags-wielding men are shown as thugs attacking Pakistani embassy in India.

The film shows that the purpose of Salman’s character is achieved only by the grace of a Muslim pir baba.

The song, Bhar do Joli mera ya Mohammed, that plays when Salman’s character goes to a dargah to make a wish to God, was originally sung by Sabri Brothers from Pakistan.

The film was written and directed by Wajahat Mirza, who later left India and shifted to Pakistan. During his career in the Mumbai film industry, Mirza wrote dialogues and screenplay for several films including Mother India, that was based on a highly controversial novel by American author Katherine Mayo on a theme similar to Ganga Ki Saugandh.

The novel, when it was published in 1927, that is, two decades before the partition of India on religious lines, was heavily criticised by Indian leaders including B R Ambedkar, who questioned the one-sided portrayal of social evils in the Indian society.

Ambedkar, in his seminal 1945 book Pakistan or the Partition of India, wrote:

“…it [the novel] created the unfortunate impression throughout the world that while the Hindus were grovelling in the mud of these social evils and were conservative, the Muslims in India were free from them, and as compared to the Hindus, were a progressive people. That, such an impression should prevail, is surprising to those who know the Muslim Society in India at close quarters.”

Mirza also wrote dialogues for Mughal-E-Azam that glorified the Mughals, including their connection with Hindu marauder Timur.

In Kabir Khan’s other film Ek Tha Tiger, the same neeyat (intention) made him show Indian intelligence officers at RAW creating situations that force their best officer to ally with a Pakistani ISI spy.

In 83, ‘oppressive’ Indian police trouble peaceful and patriotic Indian Muslims, who are the only ones to help the cops with scores of the live match.

Pakistani Army is shown helping India by choosing to not trouble the Indian soldiers during the match despite an ongoing border dispute. Imran Khan, former prime minister of Pakistan, is shown as a person happiest with the Indian cricket team.

Readers may be reminded that Imran once said that he saw cricket matches against India as “jihad”.

While Kabir cited one example of his political agenda (neeyat) in his films, it is a clear admission of how his various political agendas have been motivating him to insert specific scenes that somehow target the majority faith of this country.

The Flaw In Kabir Khan’s Take On Beef Ban

Kabir’s “politics” is not only bigoted, but also dishonest. He told the interviewer that the song was his take on the “beef ban”, most likely referring to enactment of the Maharashtra Animal Preservation (Amendment) Bill, 1995, that extended the ban on slaughter on cows to bulls and bullocks, in 2015.

Instead of showing a devout Hindu as wanting to eat meat to destroy his faith, a more honest take on “beef ban” by Kabir would have been to show an eatery serving bovine meat in the same Choudhary dhaba, where customers could choose between bovine meat and vegetarian food.

Kabir didn’t, because it would have laid bare his politics far too clearly and created legal hurdles.

The cow has been revered in India for at least a thousand years. There is a long history of invaders carrying out slaughter of cows to subjugate cow-revering natives, and Hindus and Sikhs making cow protection a form of fierce resistance against the practice.

When, during the run-up to partition, Mohammed Ali Jinnah was questioned by a journalist on the need to create Pakistan, Jinnah replied that Hindu and Muslim civilisations were poles apart, which is evident from the fact that while Hindus worshipped cows, Muslims ate them.

It was because of cow’s sacred status that Indian heroes such as Maharaja Ranjit Singh banned cow slaughter during their rule, even making it punishable by death in some cases.

A complete ban on slaughter of cow and its progeny has been in place in various states since the 1950s even though anti-Hindu propagandists would have you believe that it was Bharatiya Janata Party (BJP) that introduced it after coming to power in 2014.

It is in line with the Constitution that the ban continues in non-BJP states such as Rajasthan, Punjab and Telangana.

With his revelation about his politics, one can safely conclude that Kabir circumvented the real communal issue of cow slaughter in India by subtly pushing for acceptance of beef by Hindus.

The filmmaker has maligned crores of those devout Hindus who choose to avoid meat because their religious feelings propel them to adopt cruelty-free diet. India has never witnessed any violent imposition of this vegetarian food-choice and has instead witnessed countless cases of force-feeding beef as well as illegal cow-slaughter. Security agencies have linked cow-smuggling cartel with terrorism. But these will never feature in Kabir Khan’s fantasies.

Now that he has himself admitted to a constant political agenda in his films and proudly asserted ‘Neeyat hi sab kuch hai’, we cannot say we are surprised.