Pattern of People’s Mandate in Uttar Pradesh: Will Voters Repeat Modi and Yogi? 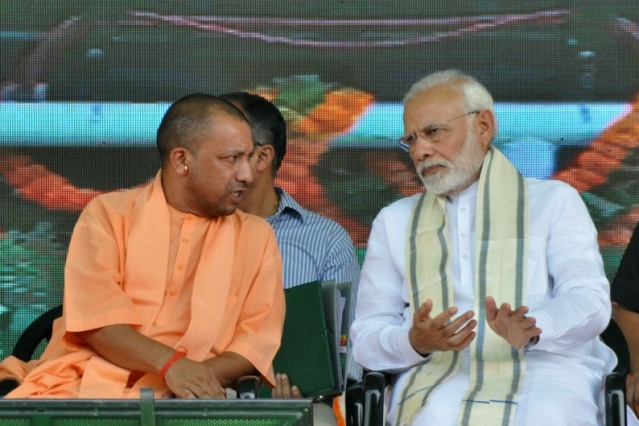 A few questions are pertinent. One, why Uttar Pradesh bogged down in repeated fractured mandates during early 1990s and thereafter? Two, why it reverted to majority mandates since 2007 beginning with BSP supremo Mayawati? And, three, what are the pointers for the future?

The Congress was an umbrella party since Independence that kept all social denominations within its ambit. But, it was unfair to Dalits and the backward communities, not giving them due share in the leadership structure. BSP patriarch Kanshiram exploited that; he tried to unite both communities to form All India Backward (SC, ST and OBC) and Minority Communities Employees Federation (BAMCEF) and, later, Dalit Soshit Samaj Sangharsh Samiti (DS-4) with some success.

Kanshiram’s move had the potential to completely transform Indian politics. But, inability of leadership of respective communities to rise above petty politics killed the initiative. Despite initial bonhomie between SP’s Mulayam Singh Yadav and Kanshiram/Mayawati in 1993 assembly polls in UP, Dalits and Other Backward Class (OBC) fell apart when SP goons attacked Mayawati in the infamous Lucknow ‘guest house episode’ in 1995. That was a flash point that separated both Dalits and OBCs leading to hat-trick of fractured mandates in 1993, 1996 and 2002 in UP assembly polls.

The BJP had put building a Ram mandir at Ayodhya in its manifesto in the 1989 elections. The results dismayed BJP as Janata Dal under Mulayam Singh Yadav swept polls and formed government displacing Congress in UP. In September 1990, L K Advani decided to undertake a rath-yatra from Somnath in Gujarat to Ayodhya in UP to educate people about the issue. Many saw this as a move to consolidate Hindus and counter consolidation of Dalits and OBCs under the leadership of Mayawati and Mulayam respectively. To make it more effective, the BJP appointed Kalyan Singh, Lodh OBC, as chief minister when it formed majority government in UP after the fall of Mulayam’s Janata Dal government in 1991.

But, the Indian politics in general, and UP politics in particular, had entered a phase of identity politics where caste identities became very important and overtook everything else. Dalits coalesced to join BSP of Kanshiram and Mayawati whereas OBCs, especially Yadavs, gathered around SP under Mulayam Singh Yadav. Mulayam headed coalition government in 1993 and 2003, whereas Mayawati formed minority government in 1995, 1997 and 2002. Mayawati and Mulayam emerged as icons of Dalit and OBC identity respectively.

However, both Mayawati and Mulayam realised that their parties may not get majority pursuing caste based identity politics and they must broad-base their electoral support. Mayawati fast-tracked social engineering rout by forming sandwich coalition of Dalits and Brahmins and romp home absolute majority getting 206 out of 403 seats and 30 per cent votes in 2007 assembly polls. That was watershed in UP politics because with that the state took u-turn from exclusionary to inclusive politics terminating the era of fractured mandates and signalled the beginning of majority governments.

Why this u-turn from identity politics to inclusive politics in UP? One explanation is that the era of identity based caste politics did not do any good to UP’s marginalised castes, Dalits and OBCs who felt disillusioned. Secondly, Mayawati and Mulayam were mostly bogged down in saving their coalition governments and were not able to concentrate on governance that brought them disrepute. Thirdly, crying about Dalits and OBCs all the time went against canons of democracy as governments are supposed to work for the good and welfare of all. Hence, both the caste parties BSP and SP decided to go inclusive.

But, the question was how to reach out to other social denominations against which these parties had indulged in virulent invectives for a long?

For that, Mayawati made an exemplary use of political sloganeering and coined very interesting ones which said “Brahmin shankh bajayega, Hathi badhta jayega’, Hathi nahin Ganesh hai, Brahma-Vishnu-Mahesh hai” etc, etc. The political sloganeering was equally matched by novel social engineering tactics to bring Dalits and Brahmins together by organising ‘Brahmin-jodo-sammelans’ addressed by Mayawati and ‘bhaichara banaao committees’ which comprised of Brahmins that reached out to Dalits in their localities.

The Dalit-Brahmin bonhomie was facilitated by Satish Mishra, a Brahmin lieutenant of Mayawati and the experiment was extended to other communities as well resulting in Mayawati getting not only some extra Brahmin votes but was able to pocket other social denominations too in her kitty. Looking at her success, Mulayam also tried to attract other communities by offering them positions in organisational leadership at grassroots level.

There could be two main reasons. One, the marginalised social denominations, especially the ati-Dalits and most-backward castes realised the uselessness of identity politics that did not bring any substantial economic and developmental gains to them, who felt that the governments would always blame the compulsions of coalition as an alibi for non-performance.

Two, the people by and large felt that let that alibi be given a good-bye forcing parties to form majority governments for better performance. Thus, they brought in one-by-one all parties: BSP in 2007, SP in 2012 and BJP in 2017. This makes UP electorate one of the most equalitarian without any prejudice to any party. The common denominator of all these three majority governments was the plank of development.

Unfortunately, BSP under Mayawati and SP under Akhilesh Yadav focussed more on constituency building than governance and development. In addition, they both suffered charges of corruption and criminalisation. Hence, they both had to go. With Narendra Modi sweeping UP with his development model in 2014 Lok Sabha polls, a new hope enveloped the state that gave BJP massive mandate in 2017 assembly polls after being in exile for 14 years.

Finally, the crucial question is: will this trend of testing parties and giving majority mandates continue in UP in future? The people are desperate for development, but the state is too big, demographically being the fifth largest country after China, India, USA and Indonesia. So, the problems in UP are big and complex. However, the experience of past several governments had been disappointing. Instead of focussing on governance and development matters, they focussed more on caste and corruption.

Should the present BJP leadership of Prime Minister Modi at the Centre and Chief Minister Yogi Adityanath at the state level demonstrate its intent, ability and agility to deliver development at the grassroots level, the people would, probably, be happy to continue the trend of clear mandates in 2019 Lok Sabha and 2022 assembly polls in UP.