PM Modi's Lahore Visit - What Is Driving This New Round Of Diplomacy? 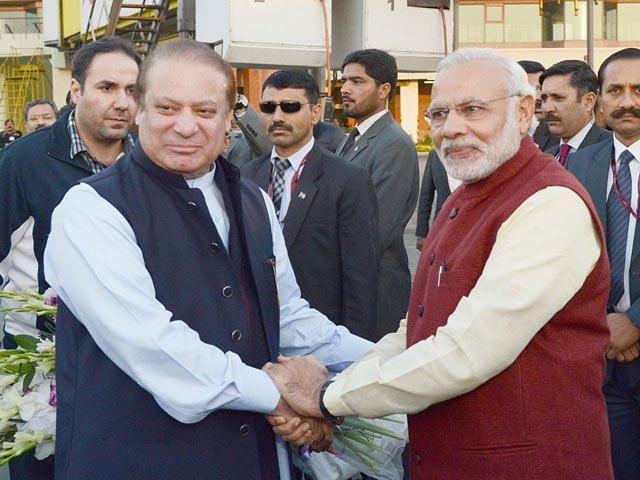 A changed international security environment, pressure on Pakistan and willingness to take risks on India’s part are driving a new round of diplomacy. What next?

Even as I write I keep a watchful eye on the television discussions. Terminologies are flying left and right; ‘ambush diplomacy’ heads that, ‘flip flop’ continues to be used and emotions are being played up about Indian casualties in J&K while questioning Prime Minister Modi’s  wisdom about deciding to visit Lahore on his way back from Kabul even as memories of the death of Col Mahadik are still fresh.

The emotions need to be tackled first. They inevitably arise when nothing else does and become a rallying point for those who understand least about international politics and diplomacy. Even as a soldier I do firmly believe that it is the sacrifice of our brave warriors which strengthens the hands of our political leadership to take courageous and landmark decisions. My only wish is that soldiers need to be remembered positively at such times and not in the way the naysayers are using their name to score points.

To say that Mr Modi has taken the subcontinent and the world by surprise is an understatement. It is reminiscent of Nixon’s Ping Pong diplomacy in 1969 within six months of his Inauguration. It was a transformational decision which came at the most appropriate moment of American history enabling it to contemplate and finally execute withdrawal from the disastrous war in Vietnam. It’s a brave decision on the part of Mr Modi although the grounds for détente have been prepared ever since Ufa with the glitches being progressively removed. Brave because he will face flak at home from those who perceive that he is moving too fast and giving too much to Pakistan without extracting the major change from Pakistan; its stance on sponsored proxy war in J&K and support to Pakistan based terrorists.

He will be once again harangued for legitimizing the Pakistan Army’s hold over its country’s foreign policy. However, there are enough people who will support the perception that we can always go around the Pakistan Army by speaking to the democratically elected Prime Minister of Pakistan. The Pakistan Army will remain a reality and there is very little the world can do about it. In fact the world learnt to deal with that situation much earlier, the Americans in particular.

What were the possible reasons for the decision? In an earlier analysis I did allude to the changed security environment after the Paris attacks. I feel that my perception appears vindicated. On one hand you have the UN Security Council resolution on Syria with no opposition and much greater diplomatic consensus is evident elsewhere. Pakistan is also under pressure due its role in the promotion of radical culture, notwithstanding its own internal security problems.  Its inability to rein in the Taliban in Afghanistan has lost it much goodwill.

The wind flowing from Pakistan is obviously indicative of lower confidence and greater necessity of enhancing its image internationally. Better relations with India, undoubtedly improves its image. No exchanges on the LoC  add weight to that;  although its loss in calibration capability has to be accepted. Détente with India indirectly sends messages to the Taliban of lower levels of support and hopefully enables a better bargaining position. The international community does not wish to see the spread of Daesh to Afghanistan or a possible link up between it and the Taliban, although thus far they have been ranged on opposite sides. Thus this is the time to act and act decisively; nudges will not make way for effective détente. Behind the upfront diplomacy some very effective leg work is being done and done quickly. The leaders are being advised that such moments come rarely.

From the criticism angle there is enough ammunition available for the opposition and all naysayers who are remaining in the time warp of statements made in May 2014 or Sep 2015 with continuous targeting of the supposed ‘flip flop’. If international events present circumstances and there are positive take aways for everyone,  ‘flip flops’ should be well accepted. Diplomacy is all about effective maneuver and the philosophy of maneuver only speaks of placing yourself at positions of advantage, not about sticking doggedly to decisions taken in a bygone period.

Mr Modi’s visit to Lahore could also be considered as ambush diplomacy with a positive tinge. It is only taking forward the relationship from the Islamabad visit of the External Affairs Minister. The surprise factor is adding to the drama and motivating the ground swell in both countries. A single liner placed in social media a few minutes after the PM landed at Lahore drew almost hundred percent positive responses in India and would probably do so in Pakistan too. Television is full of positive strokes much against the usual shouting matches across the international border. It is the effect on civil society where the difference is noticeably being felt. In a world of social and electronic media where visuals of bonhomie act like tonic and leaders who have the technique of capturing the right eyeballs thrive. That is what modern day leadership is all about; send the right messages, let them be absorbed and play along with them as they settle into the psyche of the target population.

Even while being in celebratory mood the two nations have to recall the events of 1998-99. Of course we cannot be hostage to the big letdown that Mr Vajpayee suffered a few months after he chose to break the ice. Clearly this time the Pakistan Army is also under direction from the US; the experience and lessons of the Kargil misadventure  would have been read many times over to General Raheel Sharif to sensitize him sufficiently to play ball. Yet India will have to step cautiously and watch its flanks. Trust deficit does not overcome in a few weeks or months of backslapping; trust has to be patiently rebuilt. To that extent Mr Modi’s visit will put the pressure of best behavior on Pakistan and hopefully improve the environment of trust.

What is the next step and what is the contingency planning? The next step will obviously be Foreign Secretary level talks to set the agenda and the way forward. Pakistan needs to be careful about it’s over enthusiastic High Commissioner in New Delhi. Basit Malik’s propensity to test the waters once too often may lead to awkward situations which could contribute little to the dilution of trust deficit. He should clearly give a chance for things to get off the ground. Secondly, contingency planning is equally important. How will sudden firing across the LoC be handled or if there is a big terror strike in J&K or anywhere else in India with the LeT’s footprint firmly imprinted; how will the two nations respond in the light of the current bonhomie? These are issues which need to be progressively discussed and resolved.

At the end of the day one cannot take away anything from the decisiveness and risk taking capability of Prime Minister Modi. Whether this entire exercise will finally result in something transformational, only time will tell. For now, at least the efforts have been in the right direction.