Tears From A Critical Eye 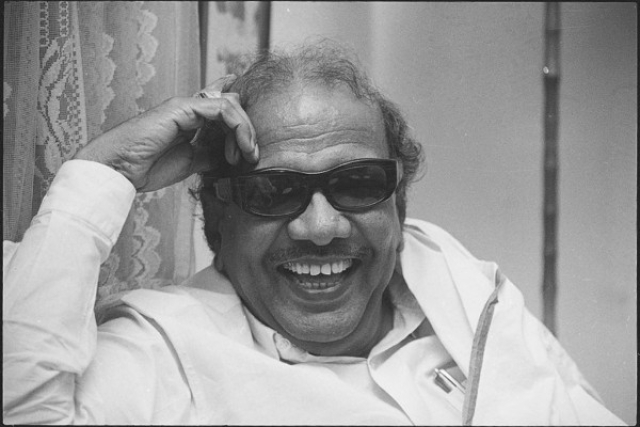 K had the natural knack to disarm and floor even the most virulent of the critics. (SN Sinha/Hindustan Times via Getty Images)

To me, Karunanidhi is always K, a lazy way out from spelling out the full name. On balance, Jayalalithaa was J. In the last 30 years, this J&K duo, at the southernmost state of India, had dominated its politics alternately.

Earlier, K had to fight his close friend and colleague MGR and was banished from power for 13 years. After the demise of MGR, K bounced back to power in 1989. A classic example of the adage ‘patience pays’ ('Poruthaar Boomiaalvar'). K was as unique as the sun. He has outlived all his opponents not just in terms of longevity of life, but with sheer determination, an unmatched intelligence, ready wit, uncanny political wisdom, a loyal cadre and phenomenal staying power. This tiny titan’s incomparable will to survive and thrive, in my view, really has been defeated only once – by death now. The way he sought to stay alive till the end was stupendous.

The Dravidian ideologies have always been unacceptable to me. And for my generation, the die-hard iconoclastic Karunanidhi was the personification of the very foundations of the Dravidian movement.

He was a very dicey target and a journalist’s delight. He was in public view day in and day out whether in power or not. And also had something to say every day. His immense knowledge of literature, history, politics and virtually everything under the ‘sun’ gave him the spontaneity and presence of mind to do this. He kept the scribes busy and always offered a fertile space for verbal duels.

I never missed an opportunity to criticise him on rationalism, self-respect etc, to mock them and him. And this was when he was chief minister. By experience, I know no politician in power ‘in TN’ would have taken such things sportively. I later learnt that he used to read all these.

In one of the several occasions I met him, he advised me to write in Tamil. This was a challenge and counter-troll couched as an encouragement. Of course, he was sincere, but I could not miss the mischief in his smile. In a way I felt shamed like a kid caught in the act of throwing pebbles at an unshakable colossus.

I can’t help getting a little more personal. My father TRR was a consistent critic for decades of K. My father fell sick in 1989 and was critical in 1990. When I went to invite Karunanidhi, who was the chief minister, for my marriage, he poured encomiums on my father (TRR) to my surprise and joy. He attended my marriage and then went straight to the hospital opposite to enquire about the health of my father who was in coma. When TRR passed away four days later, K was among the first to arrive at our residence with almost all his colleagues and he also followed it up with a touching message in a press release and in Murasoli.

Stalin, though not a rhetorician like his illustrious father, is an able administrator, very popular among the cadre and a man of a few clear and crisp words. He has crisscrossed TN several times and knows every nook and cranny of the state. He has inherited his father’s political culture in moving with all leaders, opponents without personal animosity. There is no doubt that he will carry the baton as ably as his father did.

K had the natural knack to disarm and floor even the most virulent of the critics. Some may dub it as a tactic. But from personal experience, I can vouch that this was pure and genuine political and public decency and display of how even rabid opponents have to behave. This is a lesson that every politician should learn from K.

His passing leaves a void, both in the nation and Tamil Nadu, and also in our heart space and print space.

The Madras High Court has rightly called the cheap bluff of an inept bunch of cronies running and ruining the state. This rump of a government had neither the credentials nor the credibility to deny space on the beach near the samadhi of Anna, K’s mentor. After all, K is the tallest leader of post-independent Tamil Nadu and his greatness cannot be denied even by his enemies. The government stands thoroughly exposed for its legacy of political vindictiveness and absence of magnanimity. Had they heeded the legitimate request of Stalin, Kanimozhi and other DMK functionaries who came to them in due protocol and propriety, Edappadi & Co would have been none the lesser. Now they have no face to show. K has once again won from Chepauk.

This article was first published under the series Point Blank in News Today, and has been republished here with permission.