The Ambassador’s Dusty Drive Into Oblivion 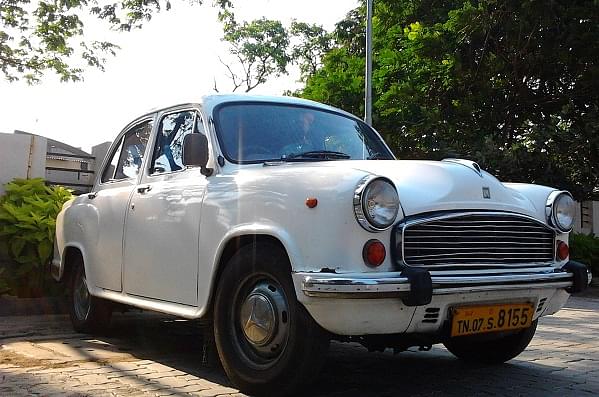 The ubiquitous, yet intimidating Ambassador was used for several years as a symbol of raw power.

Exactly five years ago, the last Ambassador car rolled off the assembly line at its Uttarpara plant in Bengal’s Hooghly district. With it came to a welcome end an important paragraph in the inglorious chapter of Nehruvian socialism that stymied India’s growth for many decades.

The Ambassador, which ruled Indian roads for five-and-a-half decades, had truly come to represent all that was wrong with not only India’s manufacturing sector, but also its system of governance and the licence-permit raj that became the country’s bane.

The stodgy car, which was used by politicians, bureaucrats and the affluent in socialist India and enjoyed a monopoly market since no other competitor was allowed to set up shop, barely saw any design modification or technological upgradation ever since it first rolled off the assembly lines in 1957.

Post-1991, when liberalisation brought in competition, it just could not keep up and died a slow but sure death.

When it hit Indian roads in 1957, the car that was based on the original Morris Oxford designed by the legendary Alec Issigonis was quite ‘modern’ due to its semi-monocoque design that gave it the spacious interiors which became the USP of the car.

Hindustan Motors, India’s pioneering automobile manufacturing company, was set up by B.M.Birla in 1942 and started operations from a small plant near Okha port in Gujarat that started assembling the Morris 10 as Hindustan 10.

When the Nehru government decided to promote an indigenous automobile industry in 1954, the group acquired the rights to the Morris Oxford Series III. The company had, by then, shifted operations to a new manufacturing plant at Uttarpara in Bengal from Gujarat.

The setting up of the Uttarpara plant marked a big boost for the manufacturing sector in Bengal. Ironically, a little over six decades later, the exit of the Tata Nano factory from Singur and its relocation to Gujarat marked the industrial nadir of Bengal.

In the 1970s and 1980s, when demand for the car was at its highest, the average waiting period for delivery of the car was eight years. This inordinately long wait could be shortened through a sifarish (recommendation) from a Union Minister or an influential MP.

And many dealers stood accused of allowing customers to jump the queue, for a handsome ‘consideration’, of course.

The car had a near-monopoly of the Indian market. Successive Union governments ensured that Hindustan Motors remained the only car manufacturer in eastern India. And the company depended heavily on government orders. At its peak, Hindustan Motors sold about 24,000 cars a year, a modest number by today’s standards (contrast this to Maruti Suzuki selling 18.62 lakh cars in 2018-19).

That is because of the stifling regulations prevalent in the Congress era, which was synonymous with the licence-permit raj. Under those regulations, a car manufacturer (or any other manufacturer, for that matter) could only produce a fixed number of vehicles (or any other product, as the case may be) in a year and would be heavily penalised if the permissible limit was crossed.

The government dictated the selling price of the car, and Hindustan Motors could not import new technology or parts.

As a result, the Churchillian-era Ambassador trudged on without any modifications for three decades. A favourite with the country’s powerful politicians and bureaucrats, the white Ambassador car with red beacon on top was the ultimate symbol of power.

It became part of the Indian landscape, and was, truly, India’s national car. But, as renowned automobile expert Hormazd Sorabjee says in this epitaph to the car penned five years ago, it was an “appalling” car.

The ambassador’s demise, he rightly writes, “marks the end of an era, but an era best forgotten”.

Driving the car took a lot of effort.

Sorabjee wrote in his article: “You needed really strong triceps to work the ridiculously heavy steering, the deftness of a surgeon to slot home the spindly column shifter into each gear (shifting from second to third gear was an art form) and immense strength to make the car stop — you had to nearly stand on the brakes”.

While the handbrake “rarely worked”, the car had many idiosyncrasies like indicator controls mounted on the top of the steering hub and a button on the floor operating the headlight dipper.

Successive Models Of The Ambassador

The first version of the car was in production till end-1963 and in January 1964, the next version of the car that was curiously dubbed ‘Mark II’ was launched. The changes were merely cosmetic: the car got a frontal facelift with a closely chequered grill, the dashboard was redesigned and instead of the earlier sunmica, the dashboard was covered in plywood while the tail lamp got an integrated indicator lens.

This version rolled off the assembly lines for more than 12 long years till mid-1975 when, coinciding with the imposition of the Emergency, the ‘Mark III’ model was launched.

Once again, the changes made in the new model were just cosmetic. The front grille got horizontal louvres and a round indicator lamp isolated from the grille, the rear bezel holding the number plate was redesigned and the Mark III got a new dashboard with three standard instruments mounted on a black recessed mesh.

Three years later, the ‘deluxe’ version of this model with a fancier dashboard and a 1760 cc engine to propel an air-conditioning system was launched.

The ‘Mark IV’ model launched in 1979 had received a substantial facelift departing from the earlier flatter design. But even so, the changes were once again only cosmetic.

The front grille was compressed in height, square parking lights were added and separate amber indicator lights went below the front bumper. A diesel variant (the first diesel car in India) powered by a 1489 cc, 37 bhp engine was also launched.

Strangely, since government rules at that time forbade private ownership of diesel vehicles, this version was sold only to government and for use as taxis.

The Mark IV was the last of the ambassador’s ‘Mark’ series and the later models were launched under different names.

The next model of the ambassador dubbed ‘Nova’ was launched in 1990 and came in two variants — a 55 bhp petrol-powered deluxe version and a 37 bhp diesel-powered version. It had a newly designed steering wheel, new steering column, better brakes and electricals, and a new radiator grille. The sixth generation of the car, christened ‘Ambassador 1800 ISZ Classic’, was launched in 1992.

It had a 75 bhp 1817 cc Isuzu engine, a five-speed floor shift manual gearbox, redesigned dashboard with instruments panel shifted to behind the steering wheel and seat belts.

Next came the ‘Ambassador Grand’ in 2003 with, claimed Hindustan Motors, “137 changes compared to its predecessor”. Apart from the cosmetic changes (again) in the body and interiors, it had a slightly improved suspension and an optional sunroof.

The ‘Avigo’ was launched in the summer of 2004 as part of the car’s ‘brand revitalisation’ drive. After that, Hindustan Motors tried many experiments with the car and in 2013, the company announced that a smaller, upgraded, trendier and more compact version of the old Ambassador would be launched.

But all those plans remained on the drawing boards.

The company suffered a major setback in 2011 when Bharat Stage IV pollution control norms came into effect. The Ambassador Classic 1.5 diesel — the manufacturer’s bread-and-butter model that used to be sold as taxis — could not pass muster and it was only in 2013 that the company managed to launch a diesel BS IV compliant version that it named ‘Encore’.

But by then, it was too late and the ‘dowdy dowager’ of Indian roads, caught in a time warp, just could not compete with modern, fuel-efficient, more comfortable and far better designed cars with advanced features.

In May 2014, Hindustan Motors announced plans to suspend production of the car. It had managed to sell only 2200 Ambassadors in 2013-2014, and blamed the shutdown on “worsening conditions at its Uttarpara plant which include very low productivity, growing indiscipline, critical shortage of funds, lack of demand for its core product, the Ambassador, and large accumulation of liabilities”.

The few chassis remaining on the assembly line were completed and sent off by early August that year. In February 2017, the Ambassador car brand was sold to Peugeot.

In many ways, the Ambassador and Kolkata were synonymous. Even after sleek and snazzy cars started zipping through the roads of all other cities in the country, Kolkata remained strangely loyal to the relic. Perhaps because it is a city that loves to live in the past.

And Kolkata today remains the only megapolis in India where these unseemly and uncomfortable smoke-belching contraptions retain a significant presence in the city’s chaotic roads.