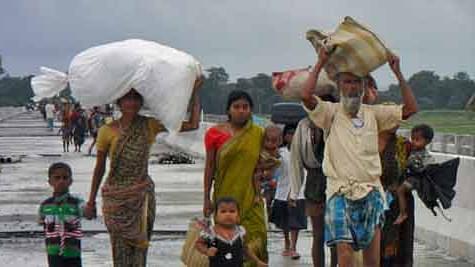 ‘The Citizenship (Amendment) Bill, 2016 that was introduced by Home Minister Rajnath Singh on 16 July 2016 in the Parliament, now tabled before a joint parliamentary committee of both the houses for examination, has triggered extensive debates and discussion in recent times due to religious distinctions being made out for acquiring Indian citizenship with regard to the illegal migrants.

The Citizenship Act, 1955 was enacted with a purpose to regulate the acquisition, termination and deprivation of Indian citizenships, regulation of ‘Overseas Citizens of India (OCI)’ and other such issues. This act provides that one can acquire Indian citizenship on different grounds that include citizenship by birth, descent, registration, naturalisation and by incorporation of territories into India. However, the act prohibits illegal migrants from acquiring Indian citizenship.

The Central Government has, under the provisions of The Foreigners Act, 1946 and The Passport (Entry into India) Act, 1920, got the authority to imprison illegal migrants and deport them to their respective countries. These acts assign authority to the central government to regulate the entry, exit and residence of a foreign national within the Indian Territory.

The question that arises is, who under the provision of the Indian Law can be termed as an illegal migrant? In this respect, section 2(1) (b) of The Citizenship Act, 1955 clarifies the position. It defines an illegal migrant as a foreigner who has entered into India.

(a) without a valid passport or other travel documents and such other documents or authority as may be prescribed by or under any law in that behalf; or

(b) with a valid passport or other travel documents and such other document or authority as may be prescribed by or under any law in that behalf but remains therein beyond the permitted period of time.

The 2016 bill amends the principal act to provide that persons belonging to six minority communities, namely, Hindus, Sikhs, Buddhists, Jains, Parsis and Christians from Pakistan, Afghanistan and Bangladesh not be treated as illegal migrants. It further reduces for them the 11 years’ residential requirement to mere six years to acquire “citizenship by naturalisation” on the grounds of their stay in India.

The bill also amends the principal act to empower the central government to cancel the registration of OCIs if they violate any law of the land, thus conferring vast power on the central government. Previously, the registration could be cancelled, if the OCI had registered through fraud or if the said person was sentenced to imprisonment for two years or more within five years of registration. But, in this article, I shall confine my analysis on the distinctions being made on religious line to acquire citizenship, the principal objection to this bill and as to where these objections stand socially and constitutionally.

The principal objection to this bill is that it violates Article 14 of the Indian Constitution which provides equality before the law or equal protection of the law to every person within India. Though it is for the court to interpret and determine whether the proposed amendment is in violation of Article 14 or not, it would be extremely inimical to look at this delicate issue from the Constitutional perspective alone.

The decision to grant citizenship status to illegal migrants is not a run-of-the-mill issue as it involves granting citizenship rights to foreign nationals and therefore each step in this respect will have to be taken with extreme care and caution. It would be in the Constitutional interests to analyse this issue in its entirety, considering different aspects of the problem, including current national and international perspectives and circumstances.

Let us assume that the proposed amendment didn't make this religious distinction. Then, India would be opening its doors to almost 370 million people from these three countries, most of whom are Muslim.

The question arises, do we have adequate resources to accommodate them, even if a small percentage of their population decide to enter our territory? Will it not have an adverse impact on the rights of India’s indigenous population in terms of enjoyment of resources and other benefits?

The Supreme Court has repeatedly held that equal protection of law means the right to equal treatment in similar circumstances or to similarly situated people. What it guarantees is similarity of and not identical treatment. It is an open secret that these six identified groups of people have been tremendously persecuted and discriminated on religious lines in these countries, which is not the case with the vast Muslim majority of these countries.

These discriminations are inherent in the respective Islamic constitutions of these three countries which endorse Islam as State religion and thus do not need any additional corroboration for the discrimination and persecution of these six identified minority religious groups.

If the constitution of a country embraces a specific religion as its State religion, the discrimination against the people of other faiths in that country becomes inherent, and the probability of religious discrimination and persecution becomes extremely high because the Constitution of any country is after all the manifestation of the will of its people.

For the contention that the proposed amendment violates Article 14, it is important to note the findings of the Supreme Court of India that, “The principle of equality does not mean that every law must have universal application for all persons who are not by nature, attainment or circumstances in the same position, as the varying needs of different classes of persons often require separate treatment. It would be inexpedient and incorrect to think that all laws have to be made uniformly applicable to all people in one go.”

The supreme court has also noted in one of its leading judgments that, “the equality under Article 14 is not indiscriminate. Paradoxical as it may seem, the concept of equality permits rational or discriminating discrimination. Conferment of special benefits or protection or rights to a particular group of citizens for rationale reasons is envisaged under Article 14 and is implicit in the content of equality. There is no abridgement of the content of Article 14 thereby – but an exposition and practical application of such contents.”

Though it is for the courts to interpret and determine rationality in the matter, in my opinion it is not at all irrational to extend protection to the groups of religious minorities who had been facing horrendous discrimination and persecution in these three countries on religious lines itself.

Rohit Kumar is a B.A. LL.B Student, in School of Law, KIIT University, Bhubaneswar. He regularly blogs for different Platforms on Socio-Politico and Legal issues.