The Disciple Who Forgot His Lessons 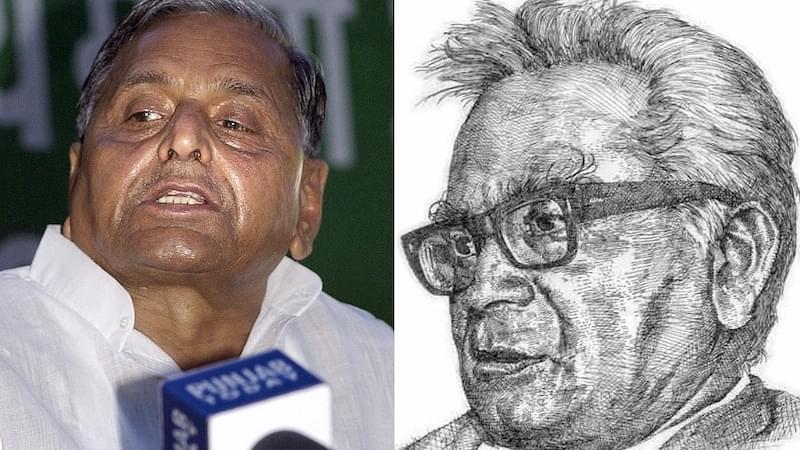 Mulayam Singh Yadav, president of the Samajwadi Party (SP) finds himself in the midst of an intense power struggle in his own party at the fag end of his political journey. What has gone wrong with him and his party? Why did his own son challenge him?

Did Mulayam distance himself from the policies, principles and ideology of samajwad? Had he abandoned his mentor Dr. Ram Manohar Lohia?

Mulayam’s relationship with Lohia was on three planes: political, ideological and political-cultural.

Mulayam had a brief but impressionable political relation with Lohia. He was greatly influenced by Lohia’s political writings. Lohia broke, along with Jayaprakash Narayan and Acharya Narendra Dev, from the Congress in 1948 and formed the Socialist Party that later merged with the Kisan Mazdoor Praja Party of Acharya JB Kriplani in 1952 to form Praja Socialist Party (PSP). Lohia was elected party General Secretary.

Soon, Lohia gave call for the civil disobedience against UP chief minister Govind Ballabh Pant’s decision to raise taxes on canal water use in 13 districts. That was the first occasion when Mulayam came in touch with Lohia as he decided to go to jail on his call at a nascent age of 15 years!

Lohia revived the Socialist Party in 1955. In February 1956, Acharya Narendra Dev died and Jayaprakash Narayan joined sarvoday. By then, Lohia had become a youth icon because of his ‘daam bandho’ (control prices), ‘jati todo’(break caste), ‘angrezi hataao’ (remove English), Himalaya bachao’(save Himalaya) movements. In the third general election of 1962, Mulayam worked hard for the Socialist Party candidate Natthu Ram from Jaswantnagar. In the 1963 bye-polls to Lok Sabha, Lohia was elected from Farukkhabad (UP). On a visit to Etawah, Lohia noticed Mulayam Singh Yadav and complimented that the country and socialist movement needed dedicated and hard working leaders like him.

The PSP and SP merged again to become Samyukt Socialist Party (SSP) which held its first convention at Varanasi in 1964. At the pursuance of Natthu Ram, Lohia made Mulayam SSP candidate in 1967 from Jaswantnagar assembly constituency and to ensure his victory, sent senior leaders like Janeshwar Mishra and Habiba Banu Tahseen (member of party parliamentary committee) to campaign for Mulayam who defeated the Republican Party of India candidate in February 1967 and became the youngest MLA in UP assembly. That could have been the starting point for a strong personal-cum-political relationship between Lohia and Mulayam.

But destiny thought otherwise. Dr Lohia passed away on 12 October 1967.

22 years later, Mulayam became chief minister of UP on 5 December 1989. When he founded the Samajwadi Party in 1992, he recognised only Lohia as the party’s political and ideological guru.

Even if we take this gesture in account, Mulayam had tricky relationship with Lohia’s philosophical, ideological and doctrinal moorings. Philosophically, Lohia was a seeker of truth. On the ideological plain, he disliked both capitalism and communism and held that both were irrelevant for ushering in a new era in human civilization.

Mulayam deviated from Lohia’s philosophy, ideology and politics. He failed to connect to the subaltern masses as he was sandwiched between pitambar politics of the right and red politics of the left. He lacked the intellectual sophistication of his mentor to amalgamate Lohiaism to contemporary concerns of secularism, ruralism and all round development, including industrialisation. Hence, he failed to retain, expand and homogenise the social base of his party and bring ideological cohesion The socialist movement under him turned from being a class movement to a caste movement.

Lohia had pointed to a ‘lack of mind’ and ‘lack of doctrinal foundation’ in the Socialist Party in India. He wanted Indian socialism to shun the capitalist-communist divide and function with autonomy adopting new strategies and tactics. Mulayam continued to demonstrate that ‘doctrinal deficit’ and failed to redefine normative concerns that could make socialism relevant to Indian socio-economic problems. Instead of making ideology the basis of its identity, Mulayam chose to make identity the basis of his party ideology. The SP’s identity-based exclusionary politics was anti-thesis of Lohiaism.

Lohia had an eclectic personality, influenced by diverse ideologies. But, he adopted the Gandhian framework suggesting reorganisation of Indian polity and economy on ‘chaukhambha raj’ where villages, districts, provinces and the centre would be its ‘four-pillars’. The very fact that Mulayam could not expand his party to national level speaks about his inability to profess what his mentor preached.

Mulayam could not connect to Lohia’s ‘sapta kranti’ or seven revolutions that gave the call for fight against gender inequality, racial discrimination, caste inequality, imperialism, economic inequality, use of arms and encroachments upon individual freedom. Had Mulayam connected Lohia’s sapta kranti with his social constituency – the rural kisans and labours, poors in urban areas, women, dalits and marginalised - things would have been very different from what they are today.

Mulayam’s relation with the political-cultural aspect of his mentor had been less than satisfactory. Lohia was known as a saint in politics; he had neither family nor property. He did not marry and left behind no bank balance nor property but only a tin-trunk, a few pair of khadi clothes and some books. Would any politician of the present Samajwadi party, let alone Mulayam, even distantly match him on this? Mulayam’s financial empire and patronage to his family in politics is in sharp contrast to that of Lohia’s political culture.

While Lohia’s early death deprived Mulayam of some ideological and practical training in socialism, the Mandal episode (1989) completely turned him against Lohiaism. Though he attempted mobilisation of ‘other backward classes’ (OBCs) for establishing their hold over grassroots political institutions and claiming space for them in leadership structure, he ended up mobilising backward-castes only. In fact, Mulayam failed to mobilise even backward-caste constituency fully. He could not keep together all backward-castes or consolidate even upper-backward-castes of east and west UP and failed to realise the great democratising potential of Mandal.

Lohia’s thrust was on anti-congressism, but Mulayam diluted that. He was initially opposed to any alliance with Congress demonstrating his staunch anti-Congressism (1996). A couple of years later, he diluted his anti-Congressism by his desire to join congress in the Third Front Alliance but insisted on not making Sonia Gandhi (a foreigner) Prime Minister (1998-99). And, finally, he took a pro-Congress stand without any inhibition since 2004.

In several policy options, Mulayam clashed with his mentor. Lohia was against doling out taxpayers money as freebies to people. He wanted to invest taxpayers’ money into modernising production (both agricultural and industrial) and convert that into ‘capital’ for generating abundance and plenty – the only panacea for perpetually enriching the deprived. He would not be happy with schemes like ‘free-laptop’ or ‘kanya vidya dhan’ etc.

The fact of the matter is that despite Mulayam Singh Yadav invoking Dr. Lohia off and on, his personal political life, ideological pursuits, policy orientations, government programmes or political-cultural forays did not synchronise with his mentor’s.