Thoothukudi Violence: How The Stage-Managed Protests Worsened The Crisis 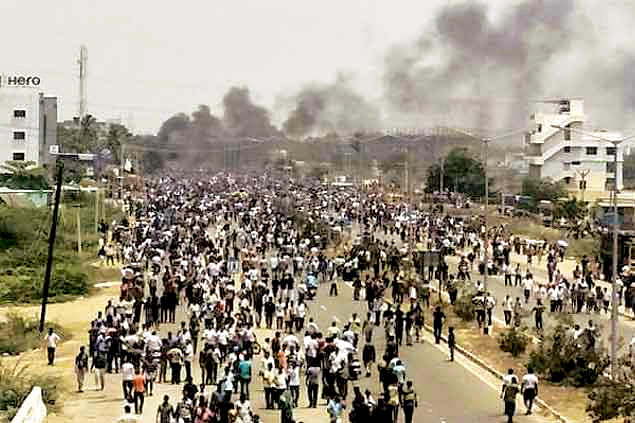 During the 100-day protests launched in Thoothukudi demanding closure of the Sterlite copper plant, a lot of fake Twitter and Facebook accounts were opened to post hate messages and provoke the people against the firm. One of the local accounts on Facebook, begun when the protests were launched, even now has over 40,000 followers and has constantly been misleading the public.

More anti-Sterlite activities such as selling T-shirts with messages opposing the UK-based Vedanta Resources Group firm were up for sale at Rs 300 and critics of the protests say that the profit motives of these persons were obvious. Some channels on YouTube took advantage of the situation to produce videos that were based on baseless facts just to attract more eyeballs.

One could ask why didn’t Sterlite try to counter these campaigns. The fact is the firm and many of its employees tried their best to explain. Some of the employees even approached the detractors, but in vain. Those determined to run a malicious campaign against Sterlite were simply not ready to hear them out. When a few employees tried to share their views and create an awareness, they were targeted personally and abused by a group that was at the helm of these protests. Women employees were trolled and even had to face casteist slurs openly in the city.

Finding that some of the protesters, who had ulterior motives, unrelenting, Sterlite even put out an advertisement in newspapers inviting all those raising questions against the plant to visit it and give their feedback. But the invite was promptly shot down by almost all activists wanting the unit’s closure.

Some of the company’s stakeholders wanted the unit to run but they were all silenced by the activists. Sterlite even tried to come out with some positive information but activists dismissed it as corporate propaganda. The increased feeling in Sterlite was that a deliberate attempt was made to drive a wedge between the company and its stakeholders.

Those in the know of the developments point fingers at Foil Vedanta, set up by Samarendra Das to take on Vedanta Resources specially, for upping the ante in the Sterlite protests. Foil Vedanta joined hands with some non-government organisations (NGOs) and held frequent meetings. They also joined hands at events and began sharing contents that were uneconomical on truth. “If an agency like the Central Bureau of Investigation investigates, it will find a hidden agenda not only behind Sterlite protests but other similar ones too,” says a Thoothukudi local, not wishing to be identified, adding that the intentions of the activists were clear from the fact that they would not have engaged themselves in a dialogue with the company.

One of the things that complicated matters in Thoothukudi was the role of a few churches. In particular, fingers are being pointed at Mohan Lazarus, owner of a television channel, organising prayers and encouraging mass participation of church devotees in the protests.

Interesting things happened in the run up to 22 May, the 100th day of the protests that ended in violence and police firing. A lot of virulent content was spread on social media and some forces, inclined towards the Left, openly promoted contents that encouraged people to engage in violent protests. Some social media activists even termed it as the “last big protest” to shut Sterlite copper.

Even in the days leading up to 22 May, stray incidents of violence took place. For example, on 12 April this year, stones were pelted at two of Sterlite’s buses carrying women and children. Windows in the buses were shattered and a few were injured. The company’s “Health on Wheel” bus that provides free healthcare to the locals was stopped and some activists threatened those inside the bus. Then Molotov cocktails were thrown in front of the copper plant and employees were threatened, asking them not to go to the factory.

Again on 22 May, a violent mob entered the employees township with deadly weapons, set fire to cars, broke apartment windows that had mainly women, children and old people. Vested interests were out to even harm women and children during the violence that day. Sterlite Copper employees point out that the company is among the hundreds of industries operating in Thoothukudi city and the State Industries Promotion Corporation of Tamil Nadu complex and therefore, it is not fair to single out their firm.

The closure of the plant by the Tamil Nadu government after the violence has affected supply of raw materials to downstream industries in the region. The acids are used for producing detergents, dyes, chemicals and pigments, while the fertilizer industry uses it for producing super phosphate and diammonium phosphate. Some 100 small units use sulphuric acid and phosphoric acid that are by-products of copper. The problems of these firms have put at risk the employment of thousands of those living in and around Thoothukudi. Some of the units are facing closure since high raw material prices are making them economically unviable.

Again, fertilizer companies were getting sulphuric acid at competitive prices until the copper plant’s closure. They are now having to import and these companies are now having to pay more. Prices of sulphuric acid have actually trebled since June. Fertilizer prices are fixed by the government and hence these producers are facing margin pressure and even facing losses.

Sterlite Copper is the biggest private user of the V O Chidambaram Port at Thoothukudi. The closure of the plant has affected some of the jobs at the port like logistics, stevedoring and loading/unloading. Overall, some 10,000 jobs in and around Thoothukudi have been lost and it is one reason why now voices have been raised for the opening of the copper plant. The other reason why voices are heard for its opening is that prices of copper appliances, wires, cables and machinery could rise. Some copper user industries have already begun complaining of supply problems.

Those supporting Sterlite point out that the allegations that have been raised against the company aren’t new and it has being doing rounds since 1996 when the plant went on stream. Some of the charges are misplaced facts and activists bent on seeing the plant’s closure have played on the minds and ignorance of the people.

Sterlite, on its part, says it has mechanisms in place to reduce emissions to negligible levels and it is a zero liquid discharge facility since it started. The company says it has invested over Rs 500 crore in environmental safeguards for its copper plant but explaining it to the people has been a challenge. But with many people being swayed by all the negative stuff on social media, the company is up against odds. One example is how a so-called environmentalist gets away by coming up with the same data repeatedly despite they being proven wrong.

Sterlite, its employees and supporters are confident that the copper plant will begin to function soon, though they expect the law to take its own course. For now, something positive has emerged. Last week, the National Green Tribunal, where the company has sought that Tamil Nadu’s order on its closure be scrapped, has allowed access to the officials to the administrative building.