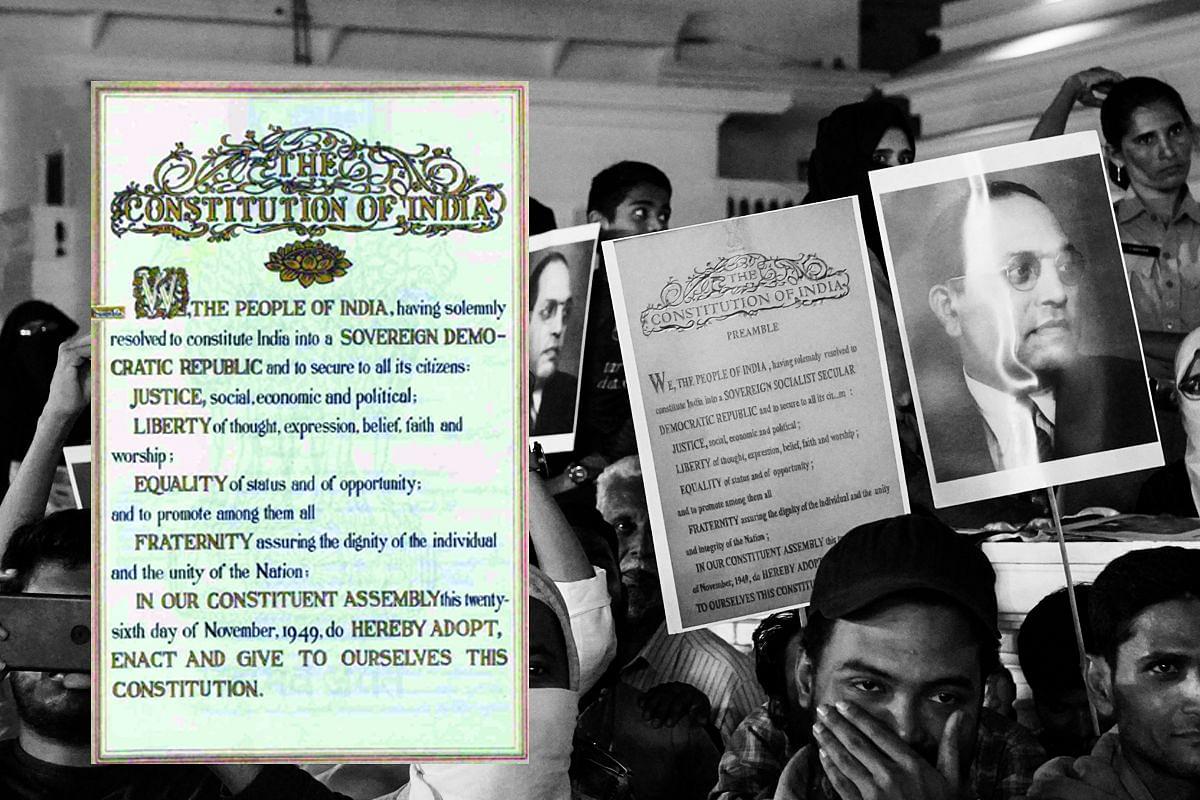 Congress president Sonia Gandhi reading the Preamble of the Constitution at a rally.

Many anti-Citizenship Amendment Act (CAA) protesters have rediscovered the Preamble to the Constitution, believing (wrongly) that the act is somehow contradictory to the spirit of the Constitution. They need some re-education. And the joke may be on them.

First, the Preamble is part of the Constitution and its guiding principle, but as many Supreme Court verdicts have held, once it is considered to be a part of the Constitution, it can also be amended. In 1976, when the country was under an internal emergency and opposition leaders were in jail, the Preamble was amended to include two debatable words, ‘Secular’ and ‘Socialist’.

This implies that even though the Preamble is believed to be sacrosanct and contains the foundational principles of the post-1947 Idea of India, it need not be considered a permanent feature since it can be amended.

If ‘Secular’ and ‘Socialist’ can be inserted through a constitutional amendment under Article 368, they can be removed, and so can some other sections. It is not inconceivable that at some future date, one could find words like “upholding Dharma” or ensuring “Ram Rajya” as key elements of an amended Preamble. Both these ideas were central to Mahatma Gandhi’s Idea of India.

Third, the Preamble’s beauty is its simplicity. However, by the very act of being simple, it essentially left scope for different interpretations. And nothing in the Preamble ensures that the principles laid down in it will be accepted as guiding principles in the actual laws that govern this country.

The full Preamble as it stands now reads:

“We, the people of India, having solemnly resolved to constitute India into a sovereign, socialist, secular, democratic republic, and to secure to all its citizens:
Justice, social, economic and political;
Liberty of thought, expression, belief, faith and worship;
Equality of status and of opportunity;
and to promote among them all
Fraternity, assuring the dignity of the individual and the unity and integrity of the nation…”.

These high ideals depend on how the laws are framed, and how the Constitution is implemented, and not on the high-sounding nature of the words themselves.

For example, how does the equality of status and opportunity translate into reality when we prescribe an order of priority for our public functionaries, where VIPs get special treatment, where hierarchies rule every part of government, and the judiciary itself thinks it can make the law and is above the executive and the legislature, capable of doing everything from appointing judges to making new laws?

How, for example, can we call ourselves “secular”, which implies equidistance of the state from all religions or equal treatment to all, when our Constitution itself offers special rights and provisions for minority institutions, including educational and religious ones?

How did the same “secular” Constitution allow for a perversion where the state runs only Hindu temples, and imposes the burden of the Right to Education only on majority-run institutions?

How does “secular” square off with the creation of exclusive minority ministries, and special forums to defend minority rights?

Or take the word ‘socialist’. What exactly does it mean, when the state can not just acquire private companies through nationalisation but also privatise them at will? Socialism could also mean redistribution of wealth, but this still leaves open a variety of ways to do so.

One can redistribute wealth through higher taxation, or by encouraging more private charity, or by enabling more and widespread self-employment and entrepreneurship and competition. One could easily have substituted the word ‘socialism’ with ‘capitalism’ and still do all that the state has done so far. After all, the idea of the welfare state evolved in capitalist nations, not in socialist ones.

And when we talk of “integrity of the nation”, how does tukde-tukde talk square off with the idea of free speech? And how does freedom of conscience and religious belief balance against the corporate rights of mosques and churches funded from abroad to propagate only some faiths? Is freedom about the individual (and her faith), which the Preamble talks about, or the large corporate institutions funded by billions of dollars of foreign donations?

The point one is making is that words have meanings only when we choose to give them one. It is not inconceivable that at some future date, the Preamble could contain words of Indic origin, including Dharma and Ram Rajya, even while giving them non-sectarian meanings. Socialism can easily be replaced by Antyodaya, which can mean giving priority to making the last man the focus of development, as Gandhi would have wanted.

Those who are busy reading the Preamble to suggest that the current government may not be in tune with its essence must know this: a Preamble is only as good as its interpretation and implementation. And Preambles can change — for the better. In 1976, they changed for the worse when words like socialist and secular, which have no Indian context to them, were mindlessly inserted after locking up the opposition.

The joke may be on the Preamble readers. They don’t know what they are doing. And they may be reading the wrong Preamble, the one messed around with in 1976. It is not the one Babasaheb Ambedkar left us with, or the one Gandhi would have wanted for us.