What Does The NHRC Report Say About Post-Poll Violence In West Bengal? 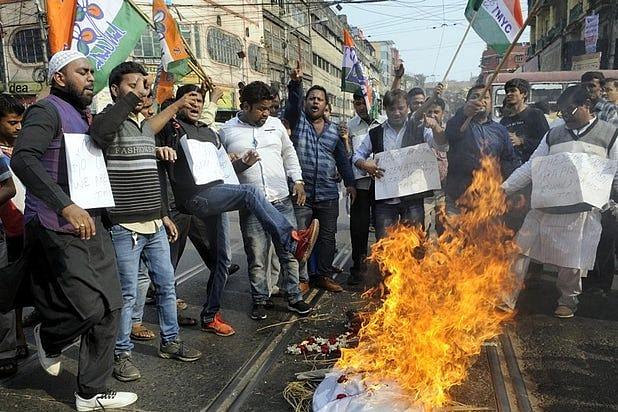 Yesterday (15 July), the final report of the National Human Rights Commission (NHRC) was submitted to the Calcutta High Court, slamming the Mamata Banerjee government for its handling of the post-poll violence after the election results on 2 May.

On the evening of the election results, the state had witnessed violence at an unprecedented scale against the supporters of the Bharatiya Janata Party (BJP), especially women, but Chief Minister Mamata Banerjee and other ministers of the Trinamool Congress were quick to dismiss the reports of violence from the ground as BJP endorsed propaganda.

The enquiry committee (EC) has termed the situation in Bengal as a manifestation of "Law of Ruler", instead of "Rule of Law".

The report notes that the violence was retributive, a state-backed vengeful action of the supporters of the ruling party against that of the BJP, now the main opposition party in the state.

The violence resulted in disruption of life and livelihood of thousands of people and resulted in economic losses. The report also mentions that the local police was grossly incompetent, if not complicit, in this violence.

The report notes palpable fear amongst the victims against the police and goons of the ruling party. Victims of sexual offences are afraid to speak, fearing backlash from the government, resulting in loss of faith in the state administration.

From senior police officers from the law enforcement agencies to the political leaders of the ruling party, no one cared for the violence on the ground, nor had any solutions to curb it. The report also notes a nexus between the political forces, bureaucratic corridors, and criminal cartels.

The EC along with the operational teams conducted discreet enquiries into the heinous crimes committed. The EC noted that the scale of violence in West Bengal was unprecedented, and it was the first time NHRC was tasked with assessing violence of this scale.

The EC along with its teams conducted more than 300 visits in less than three weeks with negligible assistance from the state government and its authorities, given the investigation was against the latter.

The report quantifies and details the complaints received from various sources. The NHRC received over 1,650 complaints that covered more than 5,000 victims.

West Bengal State Legal Services Authority received more than 315 complaints, totalling more than 9,900 victims. Fifty-seven complaints were received by the NHRC from the National Commission for Women and the EC also received complaints related to murders, rapes, molestation, and looting from local sources during their visits.

In totality, the EC received close to 2,000 complaints with over 15,000 victims, and these were the complaints that were made.

The report also quantifies the crime data received from the Director-General of Police (DGP) West Bengal between 2 May and 20 June.

Of the 29 complaints lodged in all police stations in the state pertaining to murder and homicide, an FIR was registered for all 29, but of the 379 accused in the FIRs, only 134 had been arrested.

Of the 12 complaints received across the state pertaining to rape attempts, sexual assault and molestation, an FIR was registered in all 12, but of the 53 accused named in the FIRs, only 11 had been arrested.

Of the 391 complaints received throughout the state pertaining to grievous hurt and incapacitation, FIRs had been registered for 388, but of the 3,780 named in these FIRs, merely 590 had been arrested, and 492 have already been granted bail.

A total of 940 complaints were lodged for arson, vandalism, looting, and damage to public and private property, an FIR was registered for only 609 of them. Of the 4,324 named in those FIRs, only 540 were arrested, and already, 460 have been granted bail.

A total of 562 complaints were received pertaining to threats and criminal intimidation, an FIR was registered for 130 of them, and of the 768 named, only 79 were arrested, and 123 have already been granted bail, a contradiction the report notes as well.

The low number of arrests signals the incapacity of the local police, and in some cases, them being party to the Trinamool endorsed violence. The report notes that the police is working under influence and in a biased manner and does not have the courage to take action against the goons belonging to the ruling party.

The report also presents an analysis of the on-spot inspections done by the enquiry committee. Of the total 311 visits conducted, FIR was not registered in 188 places, in 33 places the EC noted dilution of crime, and unfortunately, there were 2,869 victims who approached the teams under the EC but could not have their statements recorded due to paucity of time.

Within the EC, the member representing the National Commission for Women noted that there was fear in the eyes of the victims and their family members, and these victims were averse to saying anything against the state police or government.

Many victims did not speak to the EC, fearing backlash from the goons of the Trinamool. Many victims also stated that they were pressurised by the police to withdraw the complaint.

Within the EC, the member representing the National Commission for Minorities made several observations during their on-spot visits.

On 7 July, the team visited the village of Kenbona and the local police station, given they had received reports of post-poll violence. The EC learned from the women in the village that on the night of 23 May, police along with the Trinamool goons had broken into their houses and took them into custody in semi-naked condition after physically harassing them, including one handicapped girl.

The local police had no FIR registered in post-poll violence, and the officer-in-charge, named as a culprit by all the villagers, had already been transferred.

In Malda, the same team learned about rape of two minor girls, and across their on-spot visits, several complaints pertaining to police atrocities, fear of insecurity, lack of support from village heads working for the Trinamool were registered.

The EC, in its report, makes some sharp observations against the state police department as well. The report states that across the length and breadth of the state, the police failed to perform its duties, and the report also attaches a list of names of a few police officers whose performance was found to be abysmal on different parameters. People’s loss of faith in police has been documented.

In many cases, the EC observes, the police tried diluting the crime by filing counter cases, graver than the ones reported by the victims, against the victim themselves, thus destroying their credibility.

In some cases, police ignored the assault right before them. Delayed FIRs have also resulted in serious damage, given the importance of medical reports in cases of rapes, assaults, and injuries. The report also notes inadequate policing and a lack of confidence-building measures in the wake of this violence.

There is also the growing problem of civic volunteers (CV) within these police stations, with all of them being recruited under the rule and through the blessings of the Trinamool.

These CVs are in touch with the party cadre at the local level but do not have the training or skills warranted for a constable even. However, through their patronage from the party and the muscle power of the police, they only add to the burden of the force without any contribution.

The report also adds a paragraph about the political goons, stating that a large number of criminals who enjoy the support of the Trinamool were responsible for abetting, planning, organising, and even committing offences in a systematic and widespread manner. A separate list of these criminals has also been attached with the report.

In its macro observations, the EC notes that the post-poll events were in fact organised violence by supporters of the ruling party against the supporters of the BJP where some organs of the state government were actually aiding the violence, while some chose to remain mute spectators. Specific people were targetted, based on their political affiliations, and instances of heads being tonsured and public apologies being ordered were observed.

Apart from the vandalising, the EC also noted severing of water and electricity connections of the supporters of the BJP, extortion, stolen identity cards including Ration Cards, Aadhaar Cards, Swastha Sathi Cards, etc, and some were even denied Covid-19 vaccination. A lot many people lost their livelihoods, as business owners parted ways with supporters of the BJP, fearing backlash from the Trinamool, and given the endorsement of the state government, the violence prevails to this day.

The committee was also not supported by the state government when it came to logistics, as noted in the report. During one of the stays in Kolkata, the team was rested in a place that was not maintained, had odour issues, lack of cleanliness in rooms and kitchens, and the transport arrangements were inadequate as well.

In its recommendations, the EC has asked for Central Bureau of Investigation (CBI) investigation, for trials to be outside the state, for a court-monitored special investigation team (SIT) to register cases and investigate all complaints, for SIT investigation to be monitored by the court, for cases to be fast-tracked, for a special team of public prosecutors to be attached to the SIT to aid the investigation, collection of evidence, and follow up with the trials to ensure convictions, for a witness protection scheme, for medical records to be treated as evidence, and for victims to be monetarily helped so that they can resume their lives.

The recommendations also include deployment of static pickets of the Central Armed Police Forces in villages where more than five complaints have been received. Each of these pickets are recommended to have one to 10 jawans, and thus, even with 500 pickets, the entire deployment would be less than 10 battalions.

Restoration of water and electricity supply, free rations and medical assistance, protection for women, reconstruction of houses, preventive policing, intelligence gathering to curb such events in the future, police reforms, and a monitoring committee has also been advised.

The monitoring committee has been imagined to carry forward the work of the EC, and must periodically submit a report to the court about the developments.

In its final thoughts, the report states that thousands of West Bengal citizens have been subjected to murder, rape, displacement, and intimidation since 2 May, and the violence was a result of the entire might of the state government machinery being used to further the political objectives of the party in power, a trend that the EC worries might spread to other states as well.

More than 1.35 billion people are watching with bated breath, the report of the enquiry committee concludes, and they could not be more right.