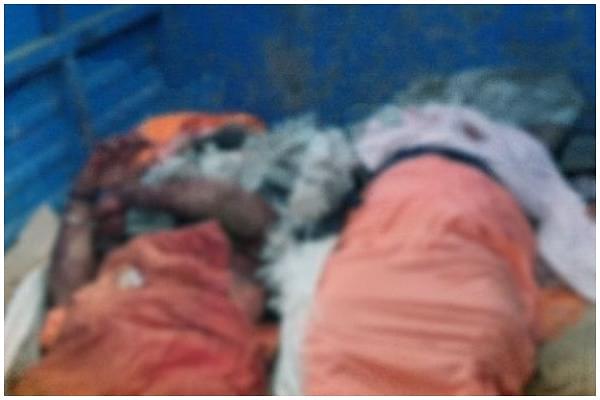 The brutal lynching of two Sadhus belonging to Juna Akhara, one of the oldest and largest in the country, in Maharashtra’s Palghar, has shocked vast majority of the country.

The gory visuals of blood soaked sadhus desperately clutching on to the policemen for protection from the violent, sticks-wielding mob and the cowardice shown by the cops who practically let the crowd beat the life out of its prey will hound our collective conscience for a long time to come.

While anyone who has watched the naked dance of this murder online or on TV is understandably furious and wants all the guilty punished, one section of the society, the left-leaning one, is more worried about the narrative that is shaping around the incident.

Almost all the left-wingers, whether in academia, media or in popular culture, have issued condemnation with certain terms and conditions.

Their chief concern, even in such a horrible tragedy, is not that three people have been lynched and that culprits be brought to justice. Their main preoccupation is to try everything in their power to prevent anyone from giving this incident a ‘communal colour’.

For the first couple of days, the reports of the lynching incident were consigned to some unglamorous corners and assigned little column inches and boring headlines.

It was only after social media took it up and posted over 3,00,000 tweets that the doyens of the left ecosystem cared to respond and the highest officials in the state government were forced to take cognisance.

Without social media, this story was well on its way of being buried for good.

Would the same have happened had the victims been a maulvi or a padre?

The answer to this question speaks volumes of the left’s hypocrisy. Their first instinct in such a scenario would’ve been to put this news front and centre with alarming headlines about minority persecution and rise of Hindu majoritarianism.

They wouldn’t have cared to check the religion of the perpetrators. The reason behind the lynching would’ve been immaterial. What the victims were doing in that village would be an offensive question to ask.

But not in the case of sadhus. Here, their first instinct was to ignore the story and bury it deep and move on.

When they couldn’t, they tried to play it down.

When that wasn’t possible, they erected a straw-man of “communalism“ so that they can strike it down easily.

Most of the people who are outraging over the lynching of the sadhus are doing so because they don’t see any sense of justice in the way Hindu victims of lynching, that too sadhus, are treated.

It is not the religion of the perpetrators that is infuriating them but the sheer hypocrisy which goes to great lengths to erase the real victims of the majority community while making martyrs out of anyone if they are a Christian or a Muslim.

The leftists say there is no communal angle in the Palghar incident. The investigation hasn’t concluded. No one knows what the motive behind the murder was. At this point, it’s all speculation.

But the same leftists went to town when a thief, Tabrez Ansari, was caught red handed by the villagers in Jharkhand and beaten up. This was branded a communal lynching when it was clear that the reason for beating Ansari was not his religion but his act of theft.

Still, the same leftists didn’t wait for the investigation to close. Their instinct then was not to reject communal angle but to overplay it.

Ditto with lynchings of cow thieves in Alwar.

Rakaar Khan, who had an FIR against him for cow theft, was lynched by villagers while allegedly attempting a similar robbery of cattle.

The leftists didn’t say that he was beaten up for stealing. Rather, they gave it communal colour.

The classic definition of a mafia is a gang of organised criminals who operate with a ruthless behavioural code. Is it just a coincidence that the left’s modus operandi so seamlessly resembles that of the mafia?

Nonetheless, the latest incident shows us that the left is not just hypocritical but lacks basic human decency to condemn violent incidents unless the victims belong to a certain religious denomination.

One of the main reasons why this is the case is because in the left’s worldview, every group has victimhood points that they can claim based on factors such as numbers, perceived atrocities faced by them, their separatist tendencies from the Hindu or Indian mainstream, etc.

The rankings of the groups in the victimhood pyramid vary based on the above factors. So, Dalits have a bigger claim on victimhood compared to the upper caste Hindus but Muslims are on a higher pedestal than Dalits because their number is small and they are a bulwark against Hinduism.

That’s why the Muslim-on-Dalit atrocities are swept under the carpet. And Dalits are Dalits and victims only if they are in clash with their upper caste Hindu brethren. If they are clashing with Muslims, their victimhood card is taken away and they are as Hindu as the next Brahmin or Baniya.

Moreover, you can claim your victimhood points only as long as you show separatist tendencies.

For instance, if you are a Muslim and try to put your country before religion, you are instantly thrown off the pyramid and your group victimhood card is snatched away.

Ditto for Dalits. If they try to be zealous Hindu or (gods forbid) Hindutvawadis, they are treated with scorn.

This is the learning from the Palghar incident (for those living under the rock so far): If the victim is Hindu, especially in saffron robes, his death (even if it has a communal angle) would be played down but if the victim is from the minority community, especially in religious attire, his death would be played up (even if it has a secular angle).

While this ideological clash would go on, we should rather train our outrage not at the unworthy leftists but at the Indian State whose representative, the cop in uniform, brushed off the hand that was seeking protection from him.

He simply watched on as the sadhu was lynched by the mob. It’s a severe indictment of the weak Indian state which fails at delivering basic public goods of security and justice to millions of people everyday.