Why Have Hindu Families In This Agra Colony Put Up ‘House On Sale’ Posters? 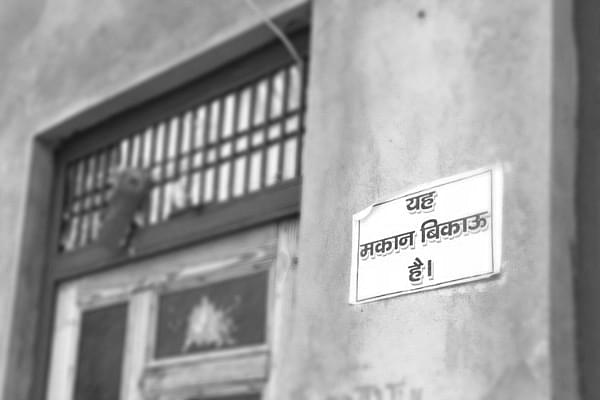 One of the houses with the ‘house on sale’ poster

Posters announcing 'yeh makaan bikaau hai' (this house is on sale) are visible on the walls of houses, one after another. Several policemen are sitting guard in the open. Tension is palpable in the air; a walk through Pawan Dham colony in Shastri Nagar area of Agra's Tajganj, brings unease.

These posters have been put up by Hindu families who have openly cited "harassment by Muslims" as their reason. When the posters came up last month, and local media picked up the news, the residents declared that all the 100 Hindu families have unanimously decided to migrate. It was reported as a case of "Kairana-like Hindu exodus".

The posters, however, are visible on the walls of only a dozen-odd houses. It also turns out that there are only two Muslim families in the colony.

The posters are of the same size, bearing similar font. In fact, residents admit they were all put up on the same day - 11 May. It was the day when Muslims from surrounding areas were supposed to gather at a colony dargah to mark 'Urs' (death anniversary of a Sufi saint). The event was planned as an eight-day religious fair where prayers were to be blared through loudspeakers and makeshift stalls were to sell goodies to children.

The event eventually happened on a much smaller scale then previous years; Hindu residents had objected to it.

For quite some time now, they have been objecting to "frequent" celebrations like this, where "hundreds of Muslims" from nearby villages gather and "create nuisance".

Yogesh Singh is one of those who have put up the 'house on sale' poster. He said, "They (Muslims) come in hundreds and create nuisance. They stay till late in the night. Their boys letch at our girls. They speak in such crude language that we are forced to keep our children inside."

"It's not just these eight days. They are here every other week. We are fed up. We have decided to move out," he said.

Yogesh shifted from a village eight kilometres away to this more urbanised area five years ago, in the hope of providing better education to his children.

"We were better off in the village," he now says.

Hindu residents claim the land on which the dargah stands has been encroached upon by Muslims. They say the dargah used to be "just a few bricks" with "hardly any visitors", but has steadily grown into a two-room structure. On the land around the dargah, a mosque is being built, which means more encroachment.

"They keep adding to what was just a few bricks. Now they have built two big rooms. They even started building a mosque. It stopped only when Bajrang Dal members intervened," said Meera Devi, 35.

Yogesh's father Narsingh, 50, wonder why a huge mosque is being built in “a Hindu-dominated colony”.

“There are all of two Muslims families. Who are they building the huge mosque for?” he asks.

Savitri, another resident, says the site of the mosque under construction should be made into a park for children. Her house does not have the poster, but Savitri says she is keen to shift out.

The Hindu residents smell a conspiracy; Muslim residents say they are being bullied.

"It is their (Muslims’) standard modus operandi. They first hijack the land and begin thronging the area in huge numbers. When distraught Hindu residents begin to leave, they buy their houses. Eventually, all Hindu families leave," says Yogesh.

We protest calling it paranoia; Yogesh retorts that we aren't aware of ground realities. He mentions Kairana and Bijnor in reply, two areas in Uttar Pradesh where Hindu families have allegedly migrated because of their Muslim neighbours.

"If this continues and especially if the mosque comes up, this colony will go the same way sooner or later. We already feel harassed," he says.

There is quiet in the colony as well as in the dargah. The house of Islam Khan, located adjacent to the shrine, stands out in the lane for being the only one without the poster.

"You have heard them. Now let us tell you the truth," he begins.

He says the Hindu residents are "doing drama".

"Ye sab naatak hai (this is all drama). The posters are a tactic to put pressure on the administration to stop Muslims from coming here," says Khan.

His sister-in-law Chaman says that by pasting the provocative posters, the Hindu residents "bullied" the administration into stopping the ‘Urs’ fair that was being held "for 60 years".

Why would the Hindu residents do drama, we ask. "They are doing it at the behest of Bajrang Dal and RSS (Rashtriya Swayamsevak Sangh)," says Khan, claiming that the land belongs to the Muslim community as the dargah has been in place for "several generations".

To know about the land ownership, Swarajya contacted Gaurav Dayal, district magistrate of Agra. He directed us to the former area city magistrate (ACM) Vinita Singh who has, incidentally, just been transferred out.

Vinita Singh told Swarajya that the land, as per government records, belongs to "one Mr Pathak" but the land deal was only verbal. She said there is no record that the land belongs to the Muslim community as claimed. She also said that the administration allowed the Urs to be held, unlike what residents are claiming.

"The prayers were held. But we did not allow the interruption. Badha chadha ke celebration nahi hua (it wasn't a grand affair)," she said.

Asked about the posters, Singh said she wouldn’t comment on that.

Garima Singh, who has replaced Vinita and taken up the post on 20 May, said she is not aware of the matter. “I don't know the current situation.”

Policemen deployed in the area are dismissive of the posters calling them "farzi" (fake).

"Nobody is going anywhere," said a policeman, requesting not to be named.

He said that the mosque and the dargah might indeed be illegally built. "The claim of the Muslims that the land belongs to them is not verified," he said. The cop admitted that the dispute has led to several scuffles in the past, including some violent ones.

Last year, Meera Devi was allegedly hit by a brick on the head by Islam Khan. The incident was widely reported in the local media. The brawl started when she tied her cow outside her house, just metres from where the dargah stands.

Meera says she has been tying the cow at the spot for "four decades". Khan, on the other hand, says the cow poops and urinates near the dargah.

"How can we tolerate it when our religious site is desecrated like this?" he says.

The unease extends beyond the disputed site. Chaman's son Saahil says "they" forced his family to shut down a small home-run business of making iron almirahs. Meera's daughter says "they" made a lot of noise in the factory making it unbearable for "us" to live.

Saahil vehemently refutes claims that Muslim visitors during Urs or otherwise harass residents. "We demanded the administration to let us hold the mela under CCTV surveillance, but they succumbed to their pressure," he says. The girl says "they" slaughter goat in full public view which creeps her out.

It is hard to not notice that even the children are active participants in the heated debate, generously peppering their arguments with "us" and "they".