Why We Trust Ourselves To Not Trust Sasikala 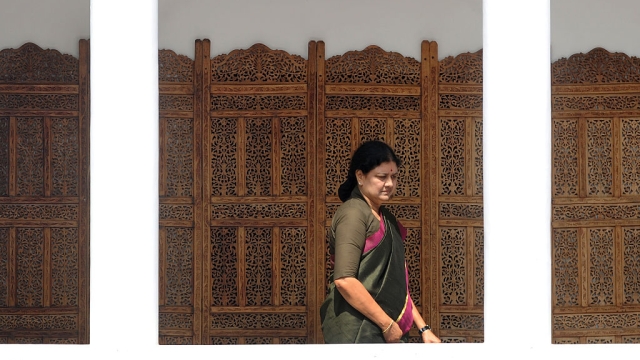 Sasikala has a shot at taking over as Chief Minister and Tamil Nadu is angry. In the last few days, barrages of memes and Whatsapp forwards have inundated our mobile phones and have made us both laugh and cringe. While crediting the creativity and imagination, they fall short of articulating the “exact” reasons of the anger. And this is being charitable. If the actual reasons are that Sasikala is “just a maid” or such like, then it is a clarion call for New Enlightenment. It means that the very thesis of egalitarianism propounded by the Dravidian parties, whose influence has loomed large for close to a century, has not yielded much.

Democratic politics gives us ample opportunities for collective soul searching and stock taking. Every few years when elections are upon us, we essentially answer the question, “What’s up?!”. Plethora of policy issues to perceptions of leaders, parties and peculiarities of the times we live, all weigh in the decision of pressing a particular button in the Electronic Voting Machine. The mechanism might be unwieldy, but it offers the society an opportunity for reflection and course-setting.

Once in a while political events throw up opportunities for self-reflection. L’affaire Sasikala is one such. It shows the mirror and like a rude journalist thrusts the question - “Who am I?”. If we are just a bundle of emotions without being able to provide a cogent response, are we human enough? If our thoughts and actions are unbecoming of a progressive society then are we doing good by our moral obligations of citizenry?

First – “She is a mere a domestic help of Jayalalithaa”. Constitution doesn’t bar domestic helps from becoming Chief Minister. Contrarily, one has to be proud that somebody from the lowest echelons of the society has risen to the top.

Second – “She has not been elected”. Our laws give her leeway for six months. Many CMs and MPs have taken office using this. So it is nothing new.

Third – “She has no experience.” No CM has experience before he/she becomes one. She has been in the backrooms of politics for decades and would have gathered some organization skills along the way. The only charitable thing then to is to give her a chance.

Fourth – “She and her extended family, are the fountainheads of corruption”. Well, unless justice is dispensed out in the court, one cannot assume guilt. That has been the essential byword of our judiciary.

Fifth – “They are thugs that indulge in coercion and gundagiri”. Recently, the MLAs were allegedly held in captive. MLAs are not children and there are due processes to address forcible confinement.

All of the above might sound absolutely rational but it is still hard to wish away the seething anger. No rationalizations are able to assuage it. Sofia Ashraf, the activist rapper, in her Facebook interview post her midnight rap-walk in Binny Road tries her best to grapple with the situation. She tries valiantly to articulate our angst but still falls short.

Let’s segue a little bit into psychology and take a closer to our own human impulses. Philosopher Martha Nussbaum writes,“Emotions should be understood as “geological upheavals of thought”: as judgments in which people acknowledge the great importance, for their own flourishing, of things that they do not fully control — and acknowledge thereby their neediness before the world and its events.” Over the course of evolution our instincts, the source of emotions, had sharpened our ability to survive. And this makes the “emotional” more intelligent than the “rational”. If you have bought in to the liberal project of taming the beast by curbing the passions, this would be counterintuitive. While a bit of self-awareness can clarify the “geological upheavals of thought”, can we be charged guilty of emoting first and justifying it consequently?

How does this all fit in to our story? The sum total of all the imagination of Sasikala as a person developed over years has ingrained in us that she is“bad” and has to be resisted. It may sound duh!, but the image of her gleaned from media and “the perceived failure” of institutions to nail her for her alleged misdemeanors has only added layers to the angst. “The system” that provides wide legal leeway for grave acts of moral turpitude is much maligned in our minds. The state’s callous attitude in meting out legal retribution that is commensurate with the adharma is visceral and apparent. That the prostrating MLAs, our representatives, who grew out of our own society, have failed to acknowledge this has only amplified the sense of being deceived.

Deep down, we want our leaders to be the best versions of ourselves. The leader that is fearless or very knowledgeable instinctively gains our respect. The virtuous leader soothes our moral panics. In that way a political leader in a democracy is more a guru than a dispenser of good policies. Spiritual gurus and politicians know that a good life begins with psychological wellbeing. That the would-be chief-deliverer of “Yogakshema” appears unqualified to quench our mental well-being is the driving our primal instinct of betrayal. Our calculation of “what ought to be” does not square up with “what is”.

If the image is what we are going to make decisions on, then it is important that we demand more from the image-makers, the media. When the news brokers are themselves corrupt we make warped choices. The second of the twin-towers, judicial institutions, the police and courts have to be made more accountable. When the judiciary is ineffective we are forced to make leaps of faith about people. Thus weak institutions corrode public morality and hence are inimical to good citizenry. Trust – the very essence of democratic politics seems shaken due to the people and methods that make these two pillars.

The garden of democracy can be maintained well by citizens that are well informed and emotionally mature. One has to guard against creeping of baser instincts that classify people based on professions or lineage. While there is some “chicken and egg” logic to institutions and people’s representatives we should keep vigil and shout out louder for reforms in the judiciary and policing.

Dr. VS Ramachandran, the renowned neuroscientist says in his book “Tell-tale Brain”: “Our mental life is governed by the unconscious, a roiling cauldron of memories, associations, reflexes, motives, and drives. Your ―conscious life is an elaborate after-the-fact rationalization of things you really do for other reasons”. That should make us all less self-righteous and more humble.

A good citizen not only remains vigilant and ponders what is good for the society, but also seizes opportunities thrown by times to reflect and grow. Self-awareness in citizens can provide the springboard for positive action. Also, our coming to terms with our own human complexities will make us more compassionate. And compassion and positive action are lynchpins of a just society.