Colossal Comet Spotted In Outer Solar System, Coming In From Deep In The Oort Cloud 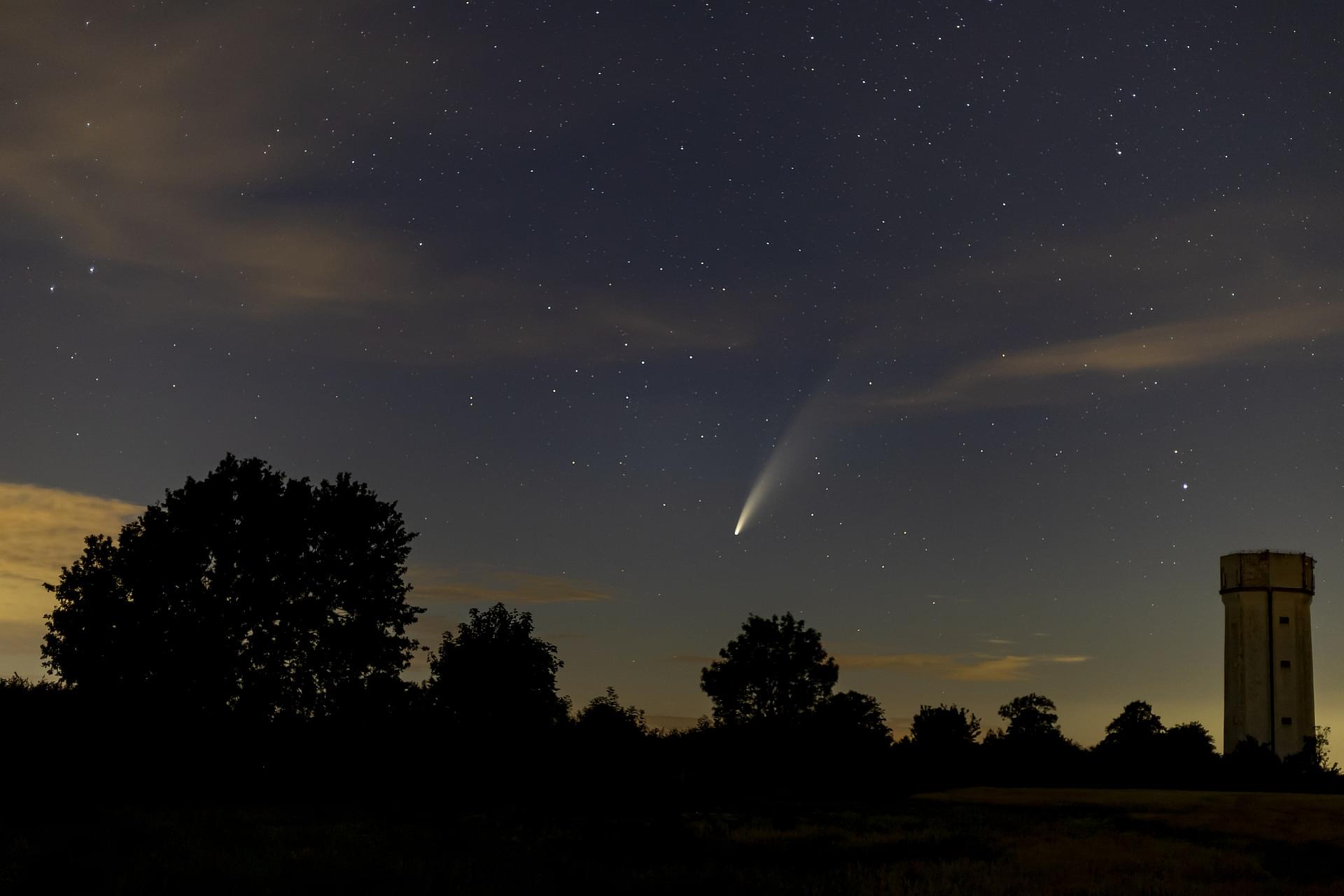 Representative image of Comet Neowise from 2020

An unusual object from the farthest reaches of our solar system is gradually making its way in towards the Sun, sparking excitement within the planetary science community.

The visitor in question is a comet, but it’s not just any comet. At an estimated size (diameter) in the 100-370 km range, it is huge relative to its average brothers, yet tiny compared to the bigger class of objects called dwarf planets.

Typical comets are around 10 km across while the most famous example of a dwarf planet is Pluto, with a diameter of 2,370 km. Though our incoming visitor is well and truly in the comet range, it may well find a place among the largest comets ever documented.

The largest comet known so far is Comet Sarabat, or the “great comet of 1729”, with a size estimate of 100 km. This came in very close to Earth and was easily visible to the naked eye.

This newly spotted comet is estimated to come in till about 10.9 Astronomical Unit (AU) from the Sun, till about the orbit of Saturn, before making a very long return journey likely to the Oort cloud.

The Oort cloud a giant spherical shell of icy debris — numbering in the billions or more, the size of mountains or more — surrounding the most distant reaches of our solar system.

1 AU is defined as the average distance between the Sun and Earth, which is about 150 million kilometres (km). Our planet goes around the Sun at a distance 1,00,000 times closer than the Oort Cloud.

Though the comet will come in close enough for astronomers to get a closer look and study it, backyard astronomers may find it difficult to spot the comet with the unaided eye or even using binoculars or basic telescopes. (It is expected to reach magnitude +17 only.)

Yet, there’s an opportunity to learn more about this distant traveller of our solar system, and in turn about the make-up of the Oort Cloud and our planetary system — and from a safe distance at that.

The detection of this comet was announced on 19 June by the Minor Planet Center (MPC), which operates at the Smithsonian Astrophysical Observatory under the auspices of International Astronomical Union (IAU).

The MPC’s job is to go after the “positional measurements of minor planets, comets and outer irregular natural satellites of the major planets”.

The DES is an international collaborative effort to unravel the mysterious dark energy causing the acceleration of the universe, by mapping and detecting galaxies, supernovae, and other large structures.

The probe began by searching the southern skies in August 2013. Over a period of six years, making observations using the 4 m Blanco Telescope in Cerro Tololo (northern Chile) on 758 different nights, the project recorded information about galaxies far away.

Comet C/2014 UN271 was one of the objects spotted as part of sifting through six years of this DES data while looking for trans-Neptunian objects. It was discovered by Dr Pedro Bernardinelli, who studies the outer solar system with the DES. “UN271 was found at a (geocentric) distance of about 29 au”, he wrote in a tweet.

At the moment, according to observations from Las Cumbres Observatory-Sutherland in South Africa, the comet’s distance from the Sun is 20 AU.

“We are currently finishing a paper that fully describes this search and presents the full catalog, including UN271,” Dr Bernardinelli, a PhD candidate in physics and astronomy at the University of Pennsylvania, USA, wrote in his tweet thread.

The paper is expected to take one to three months to reach the public.

Besides Comet Bernardinelli-Bernstein, 800 other objects have been found in the second round of looking up DES data. In the first full search, 316 trans-Neptunian objects were spotted, including 139 new discoveries.

The newly discovered comet will make the planetary region its home for a decade until it returns starting 2031. Is this enough time for a planetary science mission?

The European Space Agency’s Comet Interceptor seems perfectly suited to study Comet Bernardinelli-Bernstein since the main aim of this ESA mission is to study a long-period comet up close. Even better, it is set for launch in 2029, two years before the comet's closest approach to the Sun.

But the mission has taken to Twitter to say that this search would be beyond its capabilities.

“At its closest to the Sun, 2014 UN271 will be ten times further from the Sun than the Earth is. As our main spacecraft will be solar powered, it cannot operate at those distances without a major design change,” said the tweet.

In addition, the mission is not designed to carry fuel enough to cover such a large distance, they added.

It is unlikely that a new sample-return mission will be conceptualised on the go and executed for the purpose of studying this comet up close. It typically takes a long time, decades even, to get a mission of that nature off the ground.

But, whether or not a probe encounters the comet, there are high hopes from the planned Legacy Survey of Space and Time (LSST) at the under-construction Vera C Rubin Observatory in northern Chile. It should be able to give us an exceptionally close view.

After all, the LSST camera is described as the largest digital camera ever built for astronomy. And given that the life of the survey is set at 10 years, it should be able to track the comet all the way to its closest approach to the Sun in 2031.

Studying this giant of a comet on its 600,000 km orbit around the Sun will surely be an exciting endeavour for astronomers, especially those investigating the solar system — trust them to probably block out their calendars for the decade.