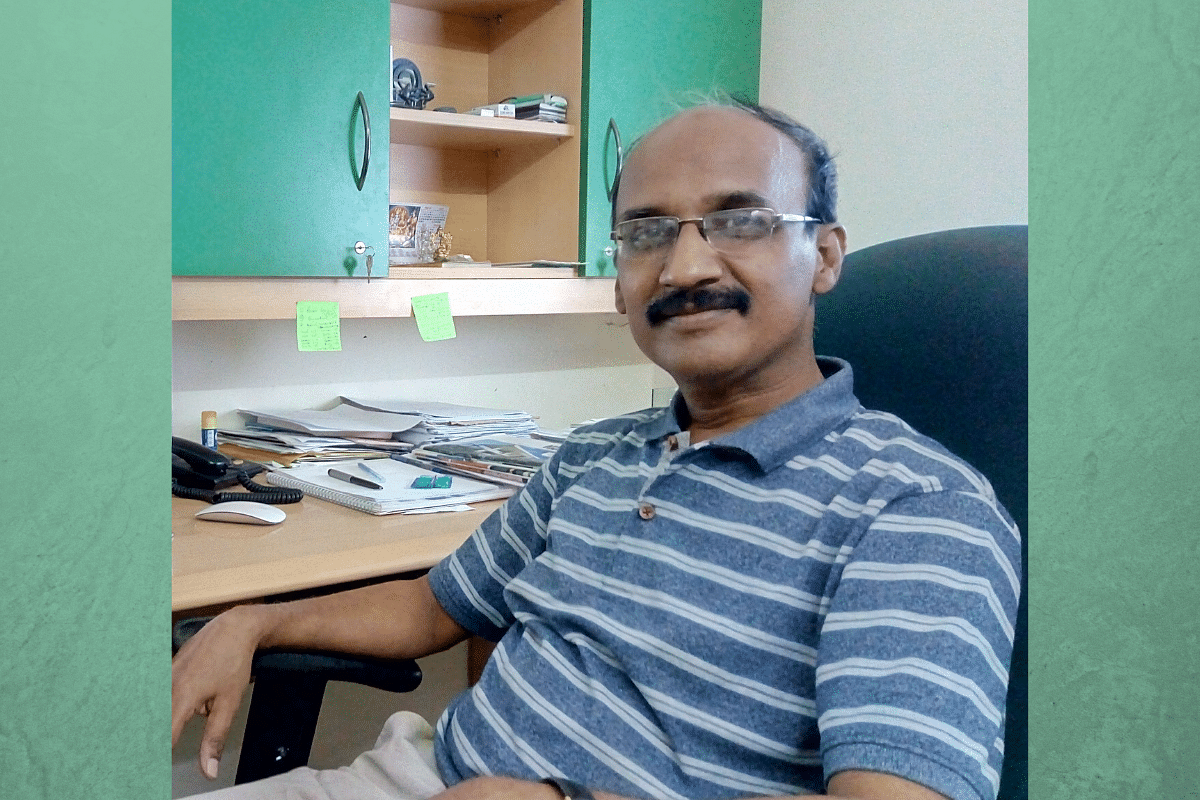 Prof V Ravindran is now director of the Institute of Mathematical Sciences, Chennai.

The Institute of Mathematical Sciences has a new scientist at the helm.

Professor V Ravindran took over as the director of the Chennai-based research institute on 11 June. He is a theoretical physicist carrying out research in high-energy physics, investigating the physics of the Higgs boson, aspects of quantum chromodynamics, theory of strong interaction, and generally, physics at the Large Hadron Collider (LHC).

He is a regular visitor to the CERN theory group and has research collaborators who work at the world’s largest particle physics centre, situated near Geneva, Switzerland.

“I visit CERN regularly, almost every year,” he says.

Prof Ravindran’s theoretical work, in fact, contributed to the landmark discovery of the Higgs boson at the LHC, CERN.

His paper, authored with theoretical particle physicist Dr Jack Smith (SUNY, Stony Brook, United States) and Dr Willy L van Neerven (Universiteit Leiden, Netherlands), was quoted in the papers revealing the discovery of the Higgs boson (citation in the Higgs boson discovery papers by the ATLAS and CMS experiments, among over 1,200 other papers).

Jack Smith was a student of Peter Higgs himself. “So I have an indirect connection with Higgs,” says Prof Ravindran, with glee.

In 1964, physicist Dr Peter Higgs had proposed that there was an energy field that permeated the entire universe. This field came to be known later as the Higgs field. It was an attempt to explain the masses of various elementary particles. The idea was that the interaction of the field with an elementary particle gave it its mass.

The simplest manifestation of the Higgs field is the Higgs boson. The particle wasn’t found experimentally until 2012, when the European Organization for Nuclear Research or CERN announced that the ATLAS and CMS experiments at the centre had each observed a new particle in the mass region around 125 GeV, consistent with the Higgs boson.

The work of Prof Ravindran and collaborators was valuable to the analyses carried out at LHC and especially concerning the Higgs boson discovery.

Prof Ravindran was born in Gudiyattam, Vellore district, and was brought up in Vellore city. He caught on to the wonder of science and mathematics at a young age. “When I was a young boy, I used to hear about scientists of high calibre, like Albert Einstein,” he told Swarajya. “My father used to talk about (Srinivasa) Ramanujan especially.”

A library stood opposite the school he attended in Vellore. He would go there and read books about scientists and it inspired him.

“I had a feeling that I wanted to understand things properly,” he says.

Prof Ravindran went on to get a Doctor of Philosophy (PhD) in theoretical physics from the institute he now heads as director. He pursued his post-doctoral research at Tata Institute of Fundamental Research, Bombay (now Mumbai), and Physical Research Laboratory, Ahmedabad.

After a couple of years as post doctoral fellow at Deutsches Elektronen-Synchrotron DESY, a leading accelerator centre based in Zeuthen, Germany, he returned to India just before the turn of the century to join a premier research institute in Harish-Chandra Research Institute, Allahabad (now Prayagraj). He was a faculty member there from 1999 to 2012.

Since 2013, he has been working at IMSc. And this month, he took over as the director of the institute.

All through this journey in academia, he received support from close quarters. "In my research career, my wife has a very big role in giving me constant support and it means a lot," he says.

Prof Ravindran has either supervised or worked with over 20 students over a span of 15 years. He is also the author of more than 150 papers, with his 2003 Higgs boson paper collecting over 900 citations. In a teaching role, he has taught courses in electrodynamics, quantum mechanics, quantum field theory, and advanced particle physics at the institute.

Prof Ravindran says he wants to understand all of physics in a single framework. “It’s a long-term goal. We are all working to get a unified theory of everything.”

“When the Standard Model emerged, some of these phenomena were not observed. So they couldn't account for it. I am of course excited about finding consistent theory to explain such phenomena in a single framework,” he says.

He is quick to remind that there isn’t yet convincing physics beyond the Standard Model.

Now at the helm of IMSc, Prof Ravindran wants to emphasise the importance of basic science and attract bright minds to basic science. “Our mandate is not only to do world-class research but also to attract young brains, train them, help them get their PhDs and do post-doctoral research, and produce world-class scientists,” he says.

IMSc is engaged in a big way to popularise science and mathematics among school and college students in and around Chennai. "We are also engaged in scientific meetings and international conferences throughout the year," he adds.

Prof Ravindran also wants to onboard more faculty of international repute into IMSc. He additionally hopes to make the science being accomplished at the Chennai-based institute more visible.

Founded in 1962 by Alladi Ramakrishnan, IMSc is home to fundamental research in theoretical physics, mathematics, theoretical computer science, and computational biology. Fundamental science is the cornerstone of IMSc.

“The main subject is mathematical sciences. We work on a good combination of fields, comprising theoretical physicists, theoretical computer scientists, mathematicians, and computational biologists. Our goal is to have a combination of groups that can complement each other for basic science,” he says.

Computational biology is the youngest of four research groups on campus. But across the four research verticals at the institute, research is carried out in diverse areas.

IMSc is known for its world-class library, thanks to a rich collection of scientific books and international journals, which is open to all academic institutions for use, and also for high-performance computing. It has developed many supercomputers over two decades, including Kabru, Annapoorna, and Nandadevi.

The institute is located in South Chennai, in the Adyar-Taramani area. The research is supported by the Department of Atomic Energy, Government of India, and by the Government of Tamil Nadu.