The Viral Explosion: A State-Wise Projection Map For Covid-19 In India 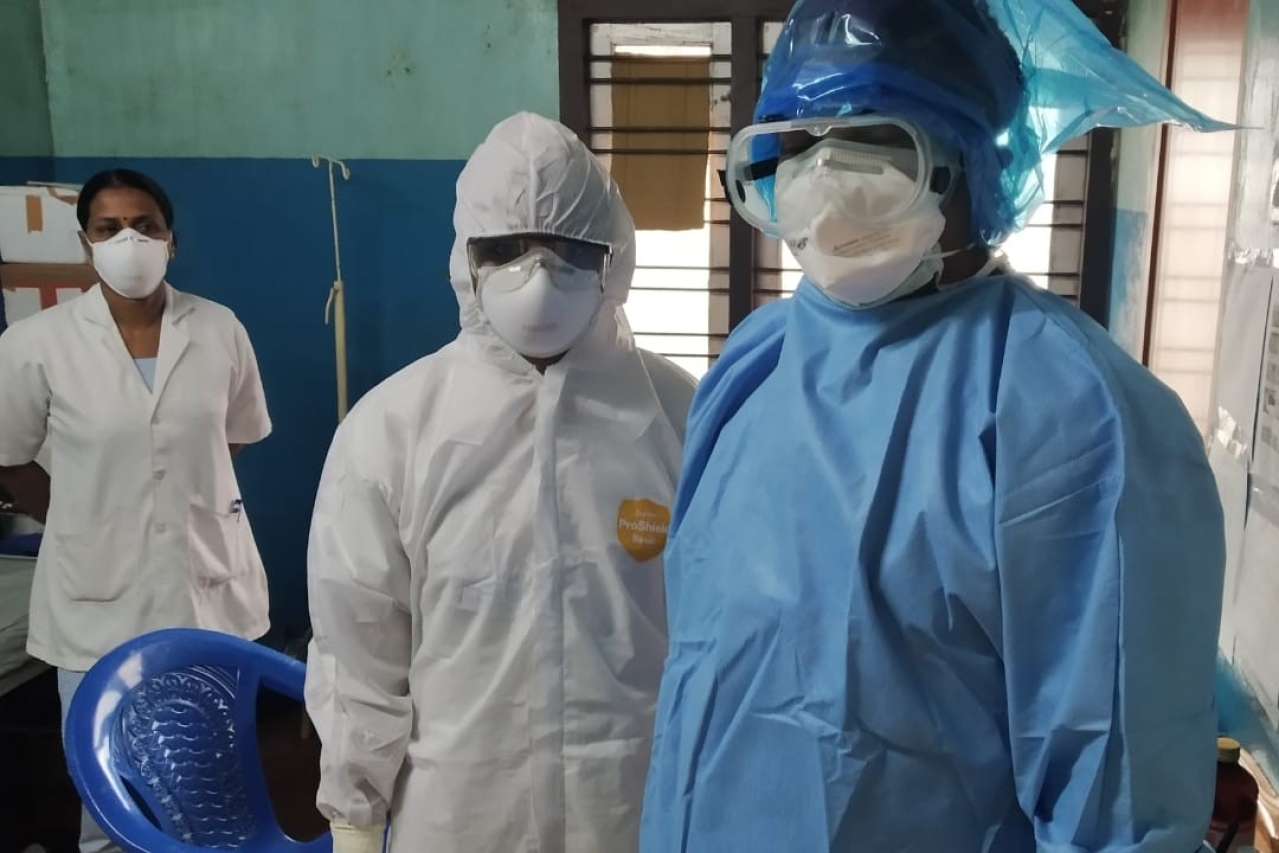 As the world grapples to deal with novel strain of Coronavirus (now called SARS-COV-2; it causes the disease Covid-19), critical health-services have been the first service-sector calamity. Inability to properly predict the rate of spread of infection and how it will burden the healthcare sector seems to have been a major stumbling block for policymakers.

In a situation like this, it is imperative that predictive models specific to India are designed and developed.

Unlike pan-India models, in the one presented below by the authors, the current lockdown scenario allows one to consider Indian states (and union territories) as separate entities and this can have significant policy implications.

In fact, a state level granularity of predictions is now a necessity as the current lock-down situation has fragmented the Indian population into clusters of sub-populations, which are expected to follow trend-lines already witnessed in other nations.

The model offers a state-wise analysis, which throws up several interesting features of the pandemic wave in India.

The pandemic wave will hit different states at different times. So, state-wise projection will allow for the most optimal resource planning.

The differences in state-wise projections also bring into question whether India should have a national virtual war room to monitor and co-ordinate between states.

The heuristic algorithm has also been coded into GUI interface – we will come back to this once we explain our essential model.

Our heuristic model has a prediction horizon of four weeks starting from 24 March (Tuesday).

The infected patient data is sourced from the Government of India database.

The current lockdown situation enables us to consider each state as a sub-population, which is expected to follow a trend-line already witnessed in another nation.

Before we discuss various aspects of the model, we must consider whether India’s numbers are under-reported.

Under-reporting can occur due to several reasons such as the fact that a large fraction of carriers can remain asymptomatic and thus are very unlikely to get tested.

Under-reporting can also occur when testing is either not easily available or is restricted.

It is a gross parameter, which accounts for contributions from both asymptomatic cases and under-reporting and hence must be a value greater than unity.

In fact, a bound on the inflation factor can be placed by considering reported death rates in India and the number of deaths seen by other nations when they were in a similar period of the pandemic wave.

In our realistic model, we posit an inflation factor value of three for large states and a value of two for smaller states.

Another important parameter that governs the relevant statistics in our heuristic model is the weekly infection growth rate.

Order of magnitude estimates for weekly growth rates can be estimated from open-source data. Since our prediction horizon is only four weeks, for which open-source trend-lines are available – the values of the multipliers have been fixed.

The four-week rates are likely to have the highest uncertainty, and we considered our lowest and highest rates to mimic those in China and Italy over the four weeks after their first regional lockdowns were announced, with the selected rate being closer to Italy than to China (which may have had stricter lockdowns than elsewhere in the world).

Finally, the model must estimate the number of people who need critical care.

An important peculiarity of the Covid-19 is the fact that the elderly or people with previous conditions often require critical care via ventilators. So, number of people requiring critical care seems  to be significant for Covid-19.

Here, we must note that occupancy rate for ventilators is often extremely high in India due to a large population. Thus, it will be highly surprising if the country can spare even five thousand ventilators for Covid-19 purposes.

The plight of Italy shows that before an upsurge happens, the country should perform a demand and supply forecast of the critical care equipment such as ventilators, oxygen cylinders.  This planning is crucial.

The fraction of Covid-19 patients, who will require such critical care can be estimated in two different ways.

Another way to estimate this number is to consider the expected death toll from Covid-19 and assume that the number of people requiring critical care is going to be around order one multiple of this estimate.

Global experience so far suggests that death rate is unusually high (around 10 per cent in some cases) for elderly and very low for young. Thus, India being a relative young country with median age of around 27 will have a lower death toll than other places.

Thus, one may expect that the death rate in India will be sub five per cent. Thus, critical care requirement should be sub-15 per cent.

Using the above arguments, we ran our heuristic model for each State of India.

Prediction data for six representative cases is shown in the table here. 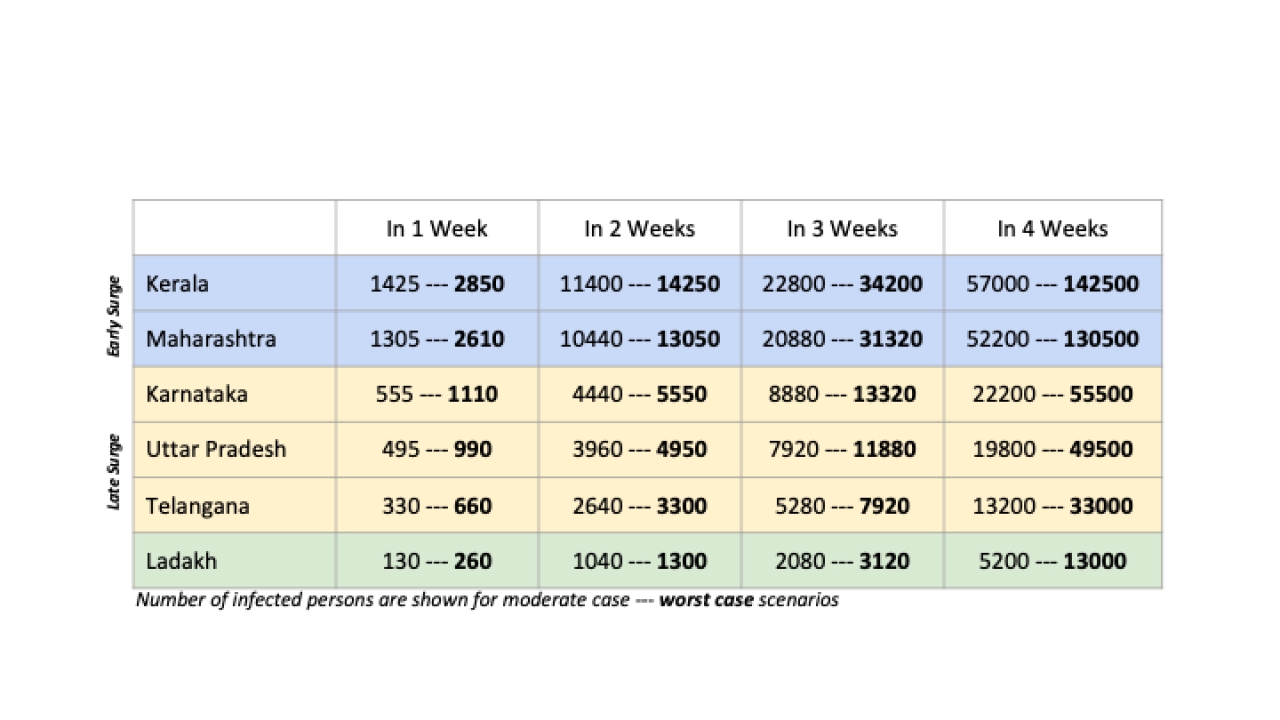 This heuristic model has been coded into an interactive interface where users can explore the impact of different assumptions/situations.

The interactive interface is available at https://mesoscalelab.github.io/covid19/.

We invite people to try and use this interface and come up with their own predictions for critical care patients for their state. Tag us on Twitter and explain whether you agree with our predictions. If you do not agree, then feel free to share the rationale for your assumptions.

An important outcome of this quantification exercise is the fact that a crisis emerging out of an epidemic or a pandemic for countries as large as India typically does not strike in a short time span.

The pandemic can have a distributed nature rather than being concentrated.

The dispersed nature of the pandemic allows the planning of relief, mitigation measures, infrastructure enhancement etc.

However, one can achieve this only if policy makers and administrators at all level share information in real-time with stake-holders. This can be done through war-rooms.

In our understanding cities like Bengaluru have already planned their war room. However, a national war-room has not yet been created.

We feel such a national-level virtual war room for such epidemics is the need of the hour and should be done on an urgent basis.

War-rooms should be created in every State and also at the central level to monitor, co-ordinate and advise local admin. Moreover, distributed clusters of critical care biomedical instrumentation and its associated supply chain be setup.

It is important to create clusters since these equipment need trained personnel to operate and clusters can operate training/distribution/redistribution centres. These clusters should be adequately dispersed so that they attain maximum coverage without getting overwhelmed.

Considering the fact that a careful management of disaster requires dissemination of information to both public as well as policy makers, there has been a remarkable silence on plans for the surge.

The crowd-sourced platform brought together a large group of technical work-force which identified key components of a surge response.

The group identified a number of tasks which needs to be urgently taken up such as a disaster management platform with a virtual war room for epidemic spread, low-cost ventilators etc. This heuristic map was created essentially to co-ordinate and complement the efforts of this group.

These efforts may or may not fructify in the long run. However, this spirit of collaboration among all stakeholders is something to celebrate.

Moreover, it shows that crowd-sourced systems can mount a rapid response to challenges that might be too difficult for a state to handle on its own.

The article expresses the personal opinion of the authors.

The authors would like to acknowledge contributions of Dr. Soumyadeep Bhattacharya and Shaurya Kaushal (PhD student at JNCASR) in developing the website and the models. The authors would also like to acknowledge the help of Sunil Sherlekar (Sankhya Sutra Labs), Dr. P. Sunthar (IIT Bombay) and Dr.  Dr. Rahul Tyagi (Washington University in St. Louis, USA) for helpful discussions.

Prof. Santosh Ansumali an Associate Professor at Jawaharlal Nehru Centre for Advanced Scientific Research (JNCASR). He  is currently also the CTO of Sankhya Sutra Labs. He is also. He tweets at @SAnsumali.

Dr. Aloke Kumar is currently an Assistant Professor at Indian Institute of Science, Bangalore. He tweets at @aalokelab.

Get Swarajya in your inbox everyday. Subscribe here.
Tags:
667 Shares