We Wouldn’t Know Black Holes So Well If Not For Him: What C V Vishveshwara Meant To Our Generation 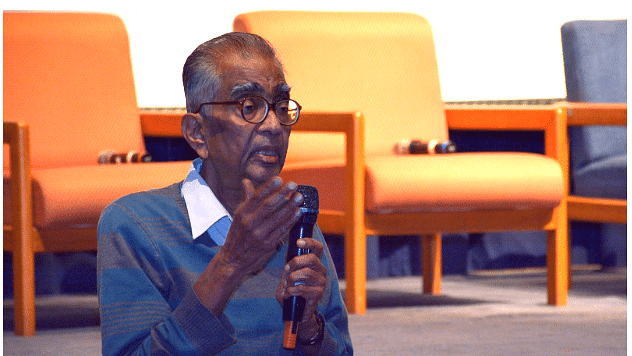 The doyen of Indian science, C V Vishveshwara, passed away at age 78 on 16 January. Called the ‘Black Hole man of India’, his pioneering contribution to Albert Einstein’s theory of gravity dates back to a time when the very word "black hole" didn’t exist in the scientific lexicon.

Born in Bengaluru on 6 March 1938, Vishu, as he was affectionately called, moved to the United States for graduate studies and earned a PhD from the University of Maryland. As a doctoral student, he published three seminal single-author papers which, combined, shaped our understanding of black holes.

In a paper published in 1968, he provided the first rigorous proof for the notion that if you travelled inside the ‘event horizon’ of a black hole, you would be trapped forever. He analysed the structure of black holes and then computed the ergo-sphere for the case of black holes with spin. (As we now understand, all black holes produced in the universe have spin.)

Two years later, he provided the first proof for the stability of a black hole. This was an important finding as it showed that if a star were to die as a black hole, it would remain a black hole for eternity (meaning they would actually exist in the universe). The iconic work of Nobel laureate S Chandrasekhar had already provided the limit at which the star would collapse to form a black hole.

In the third of his seminal papers from the same year, Vishu became the first to predict that if you were to “disturb” a black hole, it would ring like a school bell and emit rhythms on the space-time fabric of the universe. Our current understanding of the universe is that this “ringdown” stage is unique only to a black hole. So measuring it gives a fundamental certainty about their existence in the universe.

This third paper has already found a place in history books as one of the most important works in Einstein’s theory of general relativity. Forty-five years after it was published, our LIGO (Laser Interferometer Gravitational-Wave Observatory) team detected gravitational waves (space-time rhythms) from the collision of two black holes and noticed the “ringing” that Vishveshwara had predicted.

It still blows my mind to think that he published these three landmark single-author papers (one was published in Nature, no less) while still a graduate student. Most researchers, from any field of science and engineering, don’t achieve this in their entire academic career. More important, Vishu did this back in the 1960s, a time when India was in the midst of two major wars, saw three prime ministers at the helm and the assassination of Martin Luther King Jr, and watched the Moon landing. And here was this Bengalurian, studying one of the most complicated areas in science and investigating the geometry of four-dimensional abstract objects that later came to be known as black holes.

This was also much before Stephen Hawking and pop-culture references made black holes fashionable.

Only halfway into my PhD did I realise that my investigation into black holes was pioneered by an Indian physicist. In particular, I try to understand black hole collisions and hunt for them in the universe. These collisions are the most energetic events in our cosmic history since the Big Bang. We need the world’s fastest supercomputers to understand the behaviour of 4D space-time fabric right after two black holes smash into each other at half of the speed of light. What Vishveshwara computed with pen, paper and the human mind back in 1970 is remarkably consistent with the features we see today from supercomputers.

Nature is usually kind to rigorous mathematical work. When the first gravitational wave was detected on 14 September 2015, the signal emanating from the colliding black holes consistently matched with the “ringdown” stage that Vishveshwara had predicted 45 years ago. The term ‘cosmic coincidence’ never felt more appropriate.

After our team announced this discovery, I shared with Vishu an animation of one of my supercomputer simulations of a black-hole collision that matched with the signal. He responded through email,

It is really wonderful to know your role in the LIGO findings and watch the lovely video you have sent. It is amazing how much you can do nowadays with computers. Of course, you need creativity and intelligence like those possessed by young people like you in order to take advantage of modern technology. It was surprising and gratifying to find that quasi-normal modes that emerged 45 years ago had resurfaced dramatically as the ring-down of the final black hole after the merger. It is not always that a purely theoretical result turns into reality. (Emphasis mine)

Vishveshwara’s academic lineage goes back all the way to Albert Einstein. His doctoral adviser, Charles Misner, a giant in the field of gravitational physics and author of the defining textbook on gravity (Gravitation), was a student of the legendary John Wheeler. One of the longest collaborators of Einstein, Wheeler was the one who coined the term “black hole”.

As a student, Vishveshwara found role models in the first generation of Indian gravitational theorists, like Prahlad Chunilal Vaidya (known for the Vaidya Solution to Einstein’s equations) and Amal Kumar Raychaudhuri (whose equations are based on the singularity theorems of Hawking).

In addition to his genius, Vishu was known in his academic circles for his incredibly witty and nerdy humour. A masterful sketch artist, he would use his cartoons in lectures and notes, and keep everyone up with a smile while explaining the nuances of Einstein’s theory of gravity and black holes. One of his last lectures in Bengaluru, right after the announcement of LIGO’s discovery, is a testimony to his humility and profound ability to communicate.

Even while serving as a senior professor at the Raman Research Institute, Vishu reached out to thousands of students with his work as a director of the planetarium in Bengaluru. From my senior colleagues in LIGO-India to young researchers like myself, there are generations of Indian physicists who were inspired by the work of Vishveshwara.

What is unfortunate is that despite his stellar body of scientific work and lifelong commitment to promoting science in India, few acknowledged (or realised) his contribution to physics. During his lifetime, he received no Padma awards, nor any major distinction from the Government of India or the academic community. He is truly one of modern India’s unsung heroes of science, and one of the greatest black hole physicists of all time.

It is up to us, the media, the government and the informed citizens, to ensure that his name and achievements take the spotlight, and hopefully future generations of Indian students will take inspiration from his accomplishments and tread his path.

It comes down to this. If we as a nation want to excel in science, we need to start celebrating our scientific giants more than we currently do. Let’s start with Vishu.

Karan Jani is an astrophysicist and a recipient of the 2016 Special Breakthrough Prize in Fundamental Physics awarded by Stephen Hawking. He was listed by Forbes as 30 Most Influential Personalities Under 30.