Explained: How The Situation In Syria Is Only One Step Away From Causing A More Globalised War 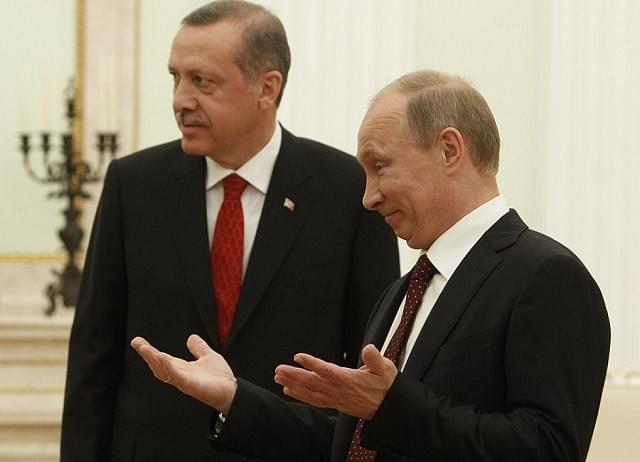 The situation is ripe for disaster given the utter profusion of state and non-state interests, national egos and local lunatics involved.

Patience is wearing thin on all sides of the war in Syria. Relations between Turkey and Russia are deteriorating fast, and there’s no indication yet of any softening of positions. Turkey shot down a Russian jet on its border, in what President Vladmir Putin has referred to as a “stab in the back”, while others have called it an “ambush”. For its part, Ankara has proclaimed its right to self-defence.

Whatever else this shoot-down suggests, it is clear that a turning point has arrived in the Syrian conflict. What comes next will determine how bad this proxy confrontation between Nato and Russia, and their allies in the area, is going to get. It can get very ugly indeed, especially if unconfirmed reports about the Turkish navy slowing down the movement of Russian vessels across the Bosphorus Straits turn out to be true. It is obvious that Russia will not back down on its role in Syria in the near future; Putin is calling for a grand coalition to fight the Islamic State (IS). The impact of its actions is already being felt on the ground, and IS is on the run at least for now.

The US, France, Britain and Germany have already committed to additional air warfare against the IS, while the Americans have said they will deploy special forces with a mandate to capture or kill IS leaders. On the surface, this looks like a generally positive development – i.e. everyone wants the same thing, which is to destroy the IS.

However, there is more than one catch. Not everyone means the same thing when they say they want to destroy the IS. Russia regards every Islamist group in Syria as a target. It is important to note that the IS is not fundamentally different in its radicalism from Jabhat al Nusra, or other Al Qaida affiliates now fighting in Syria. The US appears not to feel quite the same about the Sunni radical groups that are not IS or affiliated with it. In fact, it is not entirely clear whether the American special forces will be joining some of these Sunni radical groups in their battle against IS, or whether they will be jointly engaged against Syrian government forces.

On the Turkish side, it is anyone’s guess whether their special forces are in Syria already. Saudi Arabia, Qatar and the UAE stopped the bombing of IS months ago, and for all intents and purposes they seem to be supporting all the Islamic groups in Syria in one way or another. To add another twist to the regional profusion of war-related initiatives, Turkey’s President Erdogan has declared that Qatar will host a Turkish military base. Neither Saudi Arabia nor Iran take kindly to that, considering the memories of the Ottoman Empire. It is pertinent to point out that Saudi Arabia and Qatar are not of one mind on these things either.

Given the above, one can expect a steady ratcheting up of both foreseeable and unpredictable local tensions. Any one of the regional friction points could develop into violent local confrontation with the potential to escalate rapidly and beyond the control of the big powers that are very shy about putting feet on the ground in the area – again based on the experience of the past two decades. So, what one can also expect is that actual fighting will increasingly involve regional players. They will take the lead in determining the agenda in terms of what actually comes next. The shoot-down of the Russian jet is one such example. Expect more of the same by design or by accident, and total disagreement about which kind it was.

The war in Syria is, of course, not a civil war anymore – if it ever was one. It is already a regional war (even if you don’t include the Saudi pounding of Yemen), and has the potential become a continental war. Everyone in the region, and almost everyone on the global power table, is involved in some way. As in any confrontation with apocalyptic overtones, no one quite knows who is supporting whom on the ground and why. Accusations and allegations are commonplace, often flying thick and fast, while the bloodthirstiness of those actually on the field of battle – in particular the IS – sets new benchmarks for horror on a monthly basis, if not oftener.

The attack on the Russian civilian airliner over the Sinai, the terrorist attack on Paris – both claimed by the IS – and the refugee influx into the European Union (EU) are bringing to the fore some of the differences of opinion and interest among close allies, as well as some points of commonality between otherwise tetchy neighbours. In all this the mainstream media worldwide – self-proclaimed paragons of journalistic virtue for the most part – have proven to be remarkably pliant, mostly promoting the positions of their respective governments with varying degrees of brazenness. The situation is ripe for disaster given the utter profusion of state and non-state interests, national egos and local lunatics involved.

Recall that it all began, ostensibly, with a little local rebellion to remove Syrian President Bashar Al Assad. But soon that uprising proved to be more than little, regional rather than local, and a full-fledged civil war, not a rebellion. Various “rebel groups” materialised against the Syrian regime, and showed a remarkable attachment to Sunni radicalism, especially of the variety popularised from the Arabian Gulf region (though not practiced there with such public vigour). Not surprisingly, Shi-ites arrived soon enough to support their Syrian brethren as Iran provided ready support for the Assad regime.

Predictably, the US and its Nato allies gravitated to the side of their Gulf Arab friends, while Russia leaned towards the Syrian regime. Each of the sides had (and still have) logical arguments in favour of their respective positions, ranging from human rights considerations to upholding the legitimacy of recognised governments, and of multilateral action through UN mechanisms. But, as so often happens, such grand proclamations also disguise more practical considerations: energy transport routes, sectarian advantage, strategic leverage, military positioning, and often enough, national and personal egos.

The trouble is that such considerations start to unravel and morph when tenuous allies start pursuing their own particular local objectives, which is what happened (and continues to happen) against the backdrop of the civil war. As Assad and his forces proved more resilient and unified than anticipated, and as the Sunni radical fighters showed their inadequacies, a new and much more vicious strain of this particular Islamist virus– the IS – was injected into the arena of war, with recruits from around the world.

The IS has demonstrated bursts of battlefield capability over the past couple of years. But they have been much more interested (and effective) in remaking a brutal caliphate and generating money, as much as in replacing the Assad regime. What has become abundantly clear over the past year or so is that the IS is not an entity that emerged out of thin desert air. It may not have been created with the intent of making it what it has now become, but it was certainly supported and used in differing degrees by the powers involved in getting Assad out of the country’s future political landscape.

No country will claim responsibility for the creation or emergence of IS, but this group of Islamist psychopaths has been allowed to survive and thrive in the hope that they may weaken the Syrian regime. They did not, and are not likely to any more, but they did succeed in causing public revulsion and fear both in the West and East. This has left the Western powers, which have made the right noises for the consumption of their people but slyly acquiesced in the group’s successes, in a bit of a quandary. This dilemma now appears to have been resolved, after about 130 Parisians were slaughtered on the streets of the French capital by the IS.

Do not bet on it though. France, Britain, the US and Germany have declared their intention to get rid of IS, but believe it only when you see it. They may yet be bluffing, again for the benefit of their increasingly confused and angry publics. Remember they have supposedly been fighting the IS for well over a year now – yet somehow missed those long oil export convoys flowing towards the Turkish border. They also appear to have missed out on what their Gulf Arab and Turkish allies have been doing in terms of funding and otherwise facilitating, or even felicitating, the IS.

What does this mean in terms of the latest Russo-Turkish spat? Not a whole lot, other than that it is a milestone in the multi-polar power-play that seems likely to be the state of the world for some decades to come. Local players like Turkey, the Gulf Arab states, the Syrian regime, and Israel are likely to find themselves juggling increasingly disorienting strategic and tactical variables generated by the actions of the bigger global players. In turn, their responses will create further desperate initiatives by the US, Russia, Britain, France, etc.

Mistakes will be made, little local battles will be fought with state and non-state actors and, for a few years at least, they will be kept from spiraling out of control – if we are all lucky. But in the not too distant future the global players will find themselves unable to control the spiral of violence. And then we could well find ourselves in the middle of a continental war – mainly involving the Europe and some West Asian countries. That, of course, is only one step away from a more globalised war. Be certain that every effort will be made to drag others in.

Meanwhile, here’s something to mull over: so far, India and China have kept aloof, limiting themselves largely to offers of moral support, cost-less condemnations and pointless platitudes. Be sure, though, that New Delhi and Beijing are carefully watching the situation as it unfolds. This local uprising in Syria, which began a few years ago, is likely to end very badly if the big powers of today prove unable to rein in their proxies. As things stand, there is a high probability that they will not be able to do so.