How Fortunes Of Israeli Revisionist History Came To Be Reversed 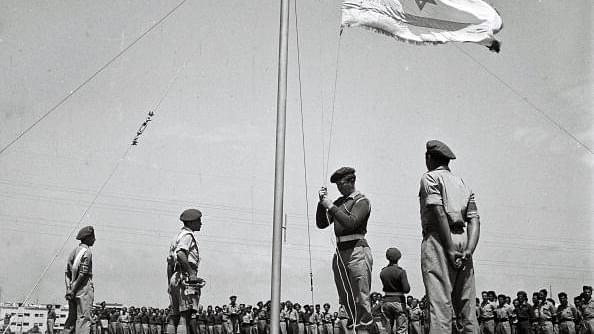 The flag of the future Jewish State is raised at morning parade at an IDF training base in 1948 in what was still the British Mandate for Palestine. (Zoltan Kluger/GPO via Getty Images)

Two Jews, three political parties! This maxim captures the deeply ingrained debate culture and democratic spirit of the Jewish people. As symbolised by the Sedar dinner during the Pesach or Passover holidays, an abiding interest to challenge the normative has been inculcated at a young age, thereby contributing to Israel becoming a vibrant, at times noisy, polity. Even the fact that the greatest critics of Israel are Jewish is not accidental but an outcome of the argumentative nature of the community.

The diversity of opinions and willingness to challenge traditional narratives have been integral to Jewish-Israeli scholarship, and in the late 1980s, this manifested in the form of New History.

Deep internal divisions over the 1982 Israeli invasion of Lebanon, prolonged occupation of the Palestinian territories and eventual outbreak of the Intifada in December 1987 provided the context for the emergence of New Historians. Many countries do not bother to write their official history, but Israel and its scholarly community went a step further and convincingly challenged some of the traditional understanding of the Arab-Israeli War of 1948.

While Israel Studies has been recognised as an independent, robust discipline in social sciences, New History emerged as its key component within Israel. In its first decade spanning 1988-1998, it spread its influence beyond the narrow confines of academia and generated intense public debate within the country. Revisionist history writing over the hotly contested 1948 war was heralded as a sign of maturity and self-reflection.

Four major pioneering figures in the field were Simha Flapan, Benny Morris, Ilan Pappe and Avi Shlaim, and they were followed by hordes of others, both in support of New History and against it. If Flapan initiated the process of re-examining the policies of founder-Prime Minister David Ben-Gurian, Morris coined the term ‘New History.’

The fundamental point of departure between the Old and New Historians has been the origin of the refugee problem. The traditional Israeli narratives largely blamed the Palestinians and argued that they were asked by their leaders to leave their homes, or they fled voluntarily.

The New Historians, however, argued that at least in some of the areas of Mandate Palestine, the Arabs were either forced to flee or expelled by the Jewish forces.

Some went a step further and argued that the expulsion was integral to Zionist strategy during the war and it was successfully implemented to establish a Jewish majority state in 1948.

It is essential to recognise that when the State of Israel was proclaimed on 14 May 1948, none of the senior Palestinian leaders, including the Grand Mufti of Jerusalem Hajj Amin Al Husseini, were in Palestine but in neighbouring Arab countries. This left the Arabs of Palestine leaderless and directionless.

New Historians also challenged the conventional narrative that the British sought to prevent the establishment of the Jewish State, but rather blamed London for the non-realisation of the Palestinian state as visualised by the United Nations’ partition plan of November 1947. They also argued that far from being weak, the balance of forces was in favour of the nascent Israeli state and that it was able to deploy more arms and fighting forces than the deeply divided Arab coalition.

New History is a testimony to the usefulness of the Israeli policy of making available state papers under the 30-year rule and thereby contributing to a lively debate over some of the crucial omissions and commissions during the early days of the statehood.

As a result, the New Historians evoked considerable attention, criticisms and rebuke within the country, and many scholars, former officials and retired commanders took them to task for their ‘motivated’ scholarship or even distorting archival materials.

Thus, they depicted Israeli actions and intentions only through Hebrew materials without any collaborative Arab evidence.

The early 1990s, interestingly coinciding with the Middle East peace process, was the high point of New History, and some of its main arguments were flagged during the peace negotiations with the Palestinians.

The Arab viewpoint of the war was briefly introduced in the school curriculum, and some in the Israeli public were prepared to accept that the formation of the State of Israel led to the Palestinian Nakba (catastrophe).

The trajectory of the New History within Israeli politics, however, was short-lived due to three closely linked reasons.

One, the willingness of the New Historians to revisit the troubled 1948 war did not evoke a corresponding revisionism among the Arab-Palestinian scholars. There was no corresponding Arab historiography over some of the painful legacies of the war, and the Israeli historiography did not result in Palestinian scholars pursuing Arab archival research, and most did not go beyond using and reinterpreting the works of the New Historians. Indeed, more than three decades after Flapan’s seminal work, The Birth of Israel: Myths and Reality, was published in 1983, the field remains the exclusive domain of the Jewish-Israeli scholars.

Two, the works of the New Historians became a political tool for various anti-Israeli activism and academic research. The findings of the New Historians were used to ascribe a sinister motive to Israel’s actions during the 1948 war. Expulsion, Pappe and others argued, had been integral to Zionist strategy during the war, and Israel was solely and exclusively held responsible for the creation of the Palestinian refugee problem. Pappe, who contested the 1996 and 1999 Knesset elections on the communist party ticket, used his findings to call for an academic boycott of Israel.

The politicisation of historiography considerably robed its academic value. This was reflected by the personal transformation of its leading light, Morris. In the wake of the al-Aqsa intifada which began in September 2000 and the scores of suicide attacks within the June 1967 borders, he began developing second thoughts about the peaceful intentions of the Palestinian leadership and the possibility of Israel reaching a political settlement with the Palestinians.

Three, New Historians conveniently sidestepped the Arab rejection of the partition plan of the United Nations as well as their refusal to accept Israel’s existence. This considerably undermined their influence. As a result, the relevance of the New History was severely dented by the onset of the Al Aqsa intifada and spiralling of violence in the streets of Israel.

Interestingly, New History has an indirect Indian connection. Its leading proponent Benny Morris is the son of Ya’acov Morris, who served as the Israeli Consul in Bombay during 1969 and 1971 and in that capacity met and interacted with senior Indian officials despite being posted in what was known in those days as India’s “diplomatic Siberia”. This author had the privilege of meeting his widow and Benny Morris over a Sabbath dinner in October 1988 in Jerusalem.

This article is part of our special Israel edition for the month of June.