Israel, Like All Other Nation-States, Has Every Right To Protect Its Ethos 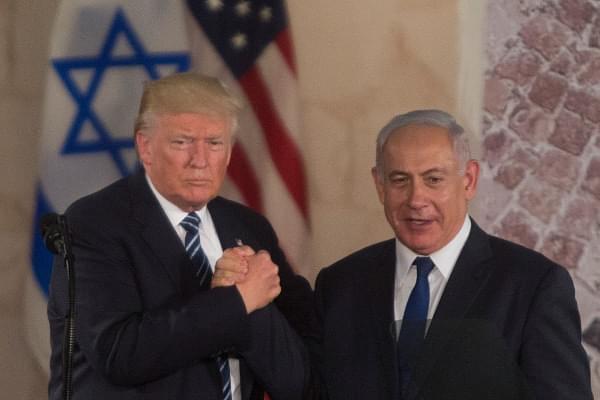 While both the US and Israel are predominantly Christian and Jewish respectively, America’s libertarian image is its most marketed weapon. (Lior Mizrahi/GettyImages)

The Israeli Knesset passed on 19 July the contentious ‘Basic Law: Israel as the Nation-State of the Jewish People’ legislation with 62 votes in favour, 55 against, and two abstentions. The slim margin of victory is a good barometer of the divisions the law has exacerbated in the Israeli and Jewish communities, Arabs and Jews, sabra and Diaspora alike.

In essence, the Nation-State Bill (NSB) explicitly declares Israel as the “national home of the Jewish people” and is part of the Basic Laws that guide Israel as a constitution might other states. It further declares that the undivided city of Jerusalem is the capital of the Jewish state and that the state shall “encourage and promote” the “establishment and consolidation” of Jewish settlements. Other clauses of the Bill reiterate the status of Hebrew, the Sabbath, the anthem, national holidays, and the use of Jewish symbols by the state. Furthermore, Israel will remain open for Jewish immigration and strive to ensure the safety of Jews all around the world.

The Bill was first proposed by former Shin Bet director Avi Dichter in 2011 and has caused controversy ever since. The barrage of criticism has been loudest from Israel’s own post-Zionists and the United States, though Arab members of the Knesset and Europe have not been far behind in their hyperbolic condemnation of the law that heralds the birth of “fascism and apartheid”. The primary concern seems to be that such a law disturbs the equilibrium between Israel’s democracy and its Jewish identity.

There is a fundamental philosophical weakness in this line of argument and it is that it not only takes European social development as normative but also considers only the outcomes that conform to particular theories or ideologies. In doing so, it reaffirms the self-indulgent belief that a liberal politics is truly pluralistic and neutral whereas liberalism actually advocates a dogma of its own that is no less rigid or exclusive than others.

Despite the controversy, if there is one thing that most Israelis agree on, it is that Israel is a Jewish state. The bulk of the NSB – its reaffirmation of Israel’s national symbols and its designation as a safe haven for international Jewry – is de facto law and finds wide consensus among Israelis. The need to restate the obvious and enshrine it into law, however, comes from the equally widespread feeling that the Jewish character of the Israeli state has been gradually undermined by post-Zionist intellectuals, the New Historians, and an increasingly liberal activist Supreme Court beginning with Aharon Barak, president of the Supreme Court of Israel from 1995 to 2006.

The Basic Laws, which serve as the constitution of Israel, clearly establish the civil and political rights of its citizens and make an overt commitment to secularism and democracy. Although the Declaration of Independence unequivocally defines Israel as a Jewish state, what that constitutes was left ambiguous; the NSB remedies this lacuna by providing an anchor to the state’s Jewish heritage and identity.

The circumstances in which Israel was created in 1948, the Jewish experience in Europe over the preceding two millennia, and the status of the country as the sole Jewish state in the world merit some consideration in the Knesset’s desire to cement the state’s Jewish character. Despite the demonisation, much of what the NSB has proposed is no different from many Western democracies. If Israel’s observation of the Sabbath or prevalence of the menorah make it less secular, the same might be argued for Christian countries which observe Sunday as the day of rest and display Biblical symbols in their sigils.

Opponents of the NSB are worried that the reservation of the right to national self-determination in Israel only to the Jewish people (1C) may put the country’s sizeable Arab minority at a disadvantage. Yet, it is unfathomable that any sovereign state allow national self-determination to any group other than the dominant majority. Spain, for example, has little patience for Basque or Catalan national expression and Italy may not react well to the Alto Adige returning to Austria.

Related to self-determination is the encouragement and promotion of Jewish settlements (7A). While foreign critics are worried that this spells a fresh wave of Jewish halutzim to Judea and Samaria, David Hazony, executive director of the Israel Innovation Fund, points out that the Hebrew word used – hityashvut – reminds Israelis of the Negev and the Galilee.

Another fear opponents have of preferential treatment given to Jewish settlements is that the law could cascade into further housing discrimination against Arabs. Again, this is unlikely as Basic Law: Human Dignity and Liberty passed in 1992 provide certain protections. The NSB, however, does weaken the ability of the court to intervene in mundane quotidian matters of budgetary allocations favouring Jewish population centres over Arab areas. It is important to note that there are already over 400 yishuvim – villages – in the Negev and Galilee that are preferentially Jewish settlements whose right the Supreme Court upheld in 2014 to appoint “acceptance committees” to vet candidates who wish to move to these settlements.

However, conservatives might want to reconsider giving legal force to communal segregation. The right to create exclusive communities does not sit well with a modern cosmopolitan democracy and can only be a recipe for turmoil in the future. They might still work at a smaller scale of an apartment complex but entire mono-cultural settlements could easily be polarised pockets simmering with radicalism and instability. Problems need not arise just from Jewish communities excluding Arabs but even other Jews from Haredi settlements, for example.

The Zionist project was undoubtedly secular, even atheistic perhaps, but it was not seen as hostile to Judaism, its raison d’etre, until recent intellectual developments. There is the obvious case to be made that the NSB is a backlash against the potential progressive capture of state institutions before it is too late. Yet, to call it a frontal assault on the secular nature of the Israeli state, is to have too slavish a devotion to the European experience rather than the Jewish story.

An intriguing interpretation is presented by Eyal Benvenisti, a professor of international law at the University of Cambridge, and Doreen Lustig, a senior lecturer at Tel Aviv University, who argue that the fears surrounding the Nation-State Law must be tempered with other Basic Laws on Human Dignity and on Fair Employment. Furthermore, reading the Nation-State Law in conjunction with the February 2017 Judea and Samaria Settlement Regulation Law, it appears plausible that the Likud and its coalition partners are laying the groundwork for an inevitability they have realised – a Jewish Israel and an autonomous, Islamic Palestinian region as part of a single state.

The Western keening for Israeli democracy is at least puzzling if not downright hypocritical. Most established nations have used force to forge a national identity and protected it with the banal acts of everyday nationalism and immigration controls; the only difference is that Europe and the United States had achieved this a century ago while Israel is a newer nation. As waves of Muslim refugees threaten European shores, the backlash is already discernible in policies and voting patterns. Israel, though a Jewish state, lives with a multicultural population whose demographics threaten to weaken the core of its identity – an ipseity its people have been persecuted for over the centuries like no other. One cannot fault Israeli lawmakers for a passionate defence of their homeland’s essential Jewish character.