Lessons For India From South Africa: Beware Of Those Bearing Gifts 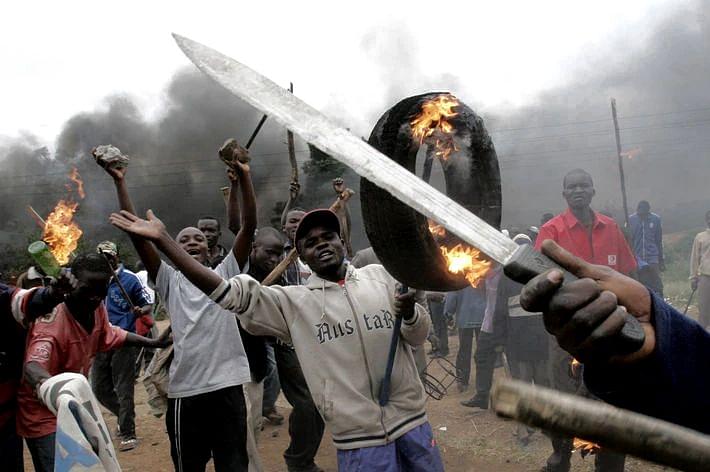 As I write this, there are riots in South Africa over a court order to jail former President Jacob Zuma on corruption charges. It may escalate to a quasi-civil war. It was startling to hear that model-minority Indian-origin South Africans are facing threats to their lives and livelihoods, and that some of them are defending themselves with firearms.

As a teenager, I read several novels by the Afrikaner author Laurens Jan van der Post about the days of apartheid, and I was struck by the trisanku nature of the Indians there: disrespected by both blacks and whites, living a tenuous and uncertain existence. We saw what happened to Indians in Idi Amin’s Uganda, and we saw how the Chettiars were ejected from Burma.

A big reason for the assaults is the certainty that Indians are soft targets: that they do not fight back, and they often have assets because they are diligent and save whatever they can. Indian businesses are being torched, and their very lives are in jeopardy.

It is important to pay attention to this because India’s future is entwined with the Indian Ocean Rim and with the fast-growing (at least till the pandemic struck) economies of that huge and relatively empty continent. The Chinese have made massive inroads there, but there is also a backlash. India needs to have an Africa strategy. India, meanwhile, merely gets second-hand information about Africa from the Anglosphere.

This has to change. There are serious commercial opportunities. For example, Indian digitisation and payment options may be attractive to African nations: UPI, RuPay, Aadhar, Cowin, India Stack etc., along with a bridge between UPI and Kenya’s M-PESA.

More to the point, there are lessons for us from the African encounter with the West. The net result has been the impoverishment and suffering of the Africans, including arbitrary lines drawn across the continent tearing apart traditional ethnic identities, leading to endless wars and displacement and ethnic cleansing. That must sound familiar to the subcontinentals: the legacy of the European empire.

I shall confine myself to three examples: Rwanda, Ethiopia and South Sudan.

There are two ethnic groups in Rwanda, the ‘tall, fair’ Tutsis and the ‘short, dark’ Hutus. Well, that’s the theory, but to the impartial observer, they seem identical: they are very close genetically, and they had generally lived peacefully with each other for centuries.

Christian missionaries arriving in Rwanda ‘discovered’ that the minority Tutsi were lording it over the Hutu. I don’t remember if they ‘discovered’ that the Tutsi were also migrants who had defeated and now oppressed the Hutus. In any case, under the missionaries, cleavages in society were manufactured or at least dramatically magnified. In the end, there was a horrific genocide. The Hutus attempted to wipe out the Tutsis with the collusion of the church.

If you get away from the gruesome killings, this might sound vaguely familiar to Indians: yes, it is the 'Aryan Invasion Fairytale' in a slightly different form. But the intent was the same: divide et impera. The goal was to maintain white control by fomenting fratricide and civil war.

It was the late N S Rajaram who had the insight that what happened in Rwanda was the template for the 'Aryan-Dravidian' divide that missionaries created in India. One Bishop Caldwell, and later, his ideological descendants such as EV Ramaswamy Naicker, created exactly the same kind of unscientific and unsubstantiated division between the allegedly 'Aryan' Tamil Brahmins and the allegedly 'Dravidian' middle castes.

We have to assume that the intent in India was also (in addition to divide and rule) continuous fratricidal warfare, bhedam, and thus easy pickings for the imperialists. The funny thing is that Tamil Brahmins are genetically identical to the allegedly 'Dravidian' middle castes, but then, there is no reason to let science stand in the way of a good narrative.

The fact that this whole thing didn't lead to genocide in India, à la Rwanda, is miraculous because it could easily have done so. Perhaps some vestige of civilizational tolerance meant only exile, not physical liquidation.

In Rwanda, after the horrific genocide, Tutsis led by Robert Kagame, who had honed fighting skills in neighbouring countries, came to power. They have maintained the peace and led to some level of development, although there are murmurs about autocracy. Interestingly enough, a deep dive into Kagame's Rwanda brings up a lot of not-so-flattering comparisons to everybody's poster-child du jour, Bangladesh, but that's a story for another time.

This is an ancient Christian country with roots going back to the days around the Council of Nicaea, 325 CE, that codified Christian dogma. Some seafaring European adventurers who ended up in India were looking for the fabled lost kingdom of 'Prester John', supposedly the king of Ethiopia.

That didn't save the country from going through a brutal civil war in the 20th century. The province of Eritrea rebelled, and after a 20-year-long war, which took the lives of an estimated 100,000 people on both sides put together, Eritrea formally became a new nation.

In the past year, another rebellion in the province of Tigray has become a serious military problem. It appears as though the Tigrayans, whose fighters had earlier allied with different factions in the Ethiopia-Eritrea war, are now on the verge of defeating combined Ethiopian and Eritrean forces and are now threatening to take the war into neighbouring states. Just like Yugoslavia a while ago, Ethiopia has fallen apart.

Why is this relevant to India? Because the West appears to be pushing for the balkanisation of India under the new and sexy name of "sub-national diplomacy". Thanks to Abhinav Agarwal for pointing out the following article and a pithy quote from it: "Subnational diplomacy should be a crucial tool of Biden's India strategy..."

And, putting their money where their mouth is, Americans are following up by ‘canceling’ the word ‘India’. It is either ‘South Asia’ (which, to quote that war-criminal Churchill, is “about as tangible as the equator”), or it is sub-national. It appears that the West is reaching out to West Bengal and also to Tamil Nadu (see the ecstasy with which they received the appointment of Esther Duflo and Jean Dreze to an economic affairs panel there).

So it’s never “Indian-American”, but “Bengali-American”, or “South Asian American”, as far as US communiques are concerned. It took them 48 hours and a lot of noise on social media to issue a half-hearted retraction to the following. The funny thing is that Samir Banerjee’s father is not even Bengali, he is Assamese! But hey, anything in the cause of bhedam. Chanakya, I am sure, would approve. Creating divisions where they don’t exist: now, where have we seen this before?

This country was created exactly ten years ago as a refuge for Christians who, it seems, were being oppressed by North Sudan’s Muslim majority. That is also a story we have heard elsewhere: partition on ideological or especially on religious grounds, courtesy the West. East Timor, for instance. Intriguingly, though, when a European country (Germany) was divided, it was quickly reunited. I doubt the same will be true for other countries divided by the West.

In 2011, there were hopeful predictions about an egalitarian and prosperous South Sudan, especially because it has oil. But the reality is far from it: the country is desperately poor, and there are accusations of gross human rights violation and oppression based on ethnicity. Child marriage is rife, child soldiers are common, and rape is used widely as a war tactic.

The creation of South Sudan has not led to any great improvement in the lives of the people.

Of the various ‘splittist’ (to use Chinese vocabulary for a minute) groups in India, most virulent are the ‘Dravidian’ parties of Tamil Nadu, which nurse fond hopes for something they call ‘United States of South India’. India has also seen that widespread Christian conversion leads to secession and demands for separate homelands: as in much of the Northeast. As conversion increases in Telangana and Tamil Nadu (there are already substantial numbers in Kerala), the urge to secede will likely increase.

South Sudan’s case is salutary: creating a new nation based on religion is not exactly the most sensible course of action. Fortunately, in India’s case, apart from a few hard-core Tamils, most people in South India have no particular interest in anything ‘Dravidian’. But the ‘subnational diplomacy’ specialists from the Biden administration will likely create trouble. As an example, the closure of the Sterlite copper plant — precisely when copper prices and demand are set to go through the roof — must rank as one of the most brain-dead, malicious acts of recent times.

It is quite likely that the famed sub-national diplomacy spoken of by the Center for Strategic and International Studies (CSIS) is being applied to the cause of ‘Dravida Nadu’. In this, there will be other eager partners: Pakistan, China and various busybodies such as the Scandinavians who like to fish in troubled waters.

Interestingly, I have been seeing at least on social media that ordinary Africans are far more cognizant of the malfeasance of ex-colonials than Indians are. Their leaders are aware, too. Kenneth Kaunda of Zambia, who died recently, was one. So was whoever it is who said, pithily, “When the missionaries came, they had the book and we had the land. They taught us to pray with our eyes closed. When we opened our eyes, they had the land, and we had the book”.

Indians, and our leaders, are still bedazzled and mouth platitudes such as vasudhaiva kutumbakam (the world is one family) and athithi devo bhava (guests are equivalent to god) out of context. It is time we learned something from the Africans.