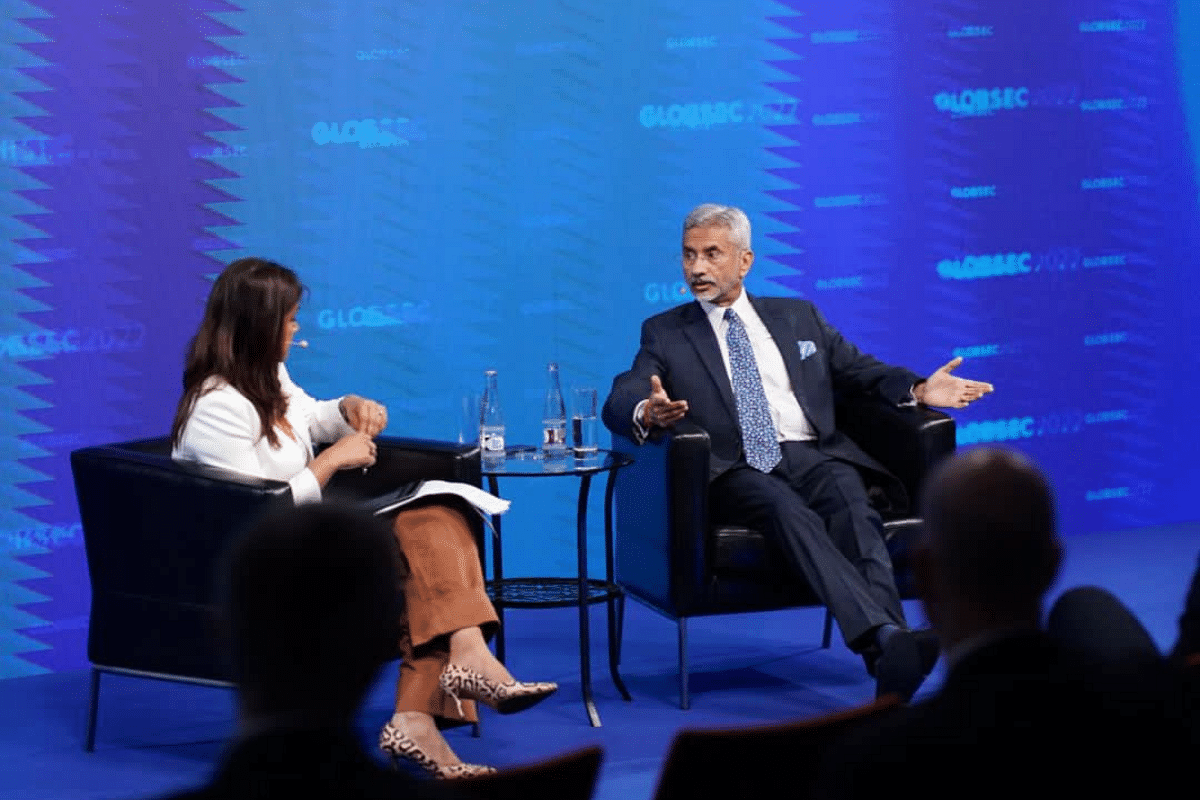 Dr S Jaishankar’s public engagements with the West, as the foreign minister of India, are slowly becoming the stuff of legend. The clarity of thought he displays, and the patient, refined manner in which he argues India’s case, along with a mischievous smile at times, has generated an enormous fan following.

The internet is flooded by memes of Jaishankar with morphed, blazing red eyes, to signal, and represent, a new India that is confidently on the move. Some even use this image as their profile picture. And he is routinely referred to as “The Chadshankar” — a portmanteau based on ‘chad’, which is modern slang for a cocky, irrepressible, alpha male who just can’t be beat.

There is a reason for Jaishankar’s popularity: this is a new generation coming into its own, sans the baggage of post-colonial destitution, or an inferiority complex based on the colour of one’s skin.

They see in him what they see in themselves, and their nation: that we won’t be talked down to, cowed, or pushed around, and that we will secure our interests in accordance with morals and international law.

This new India is done with hypocrisy, and Jaishankar’s arguments resonate with their sentiments.

His latest hit was composed during an interview at a security conference in Bratislava, Slovakia. It was a command performance for many reasons, including a very intriguing one.

The first point Jaishankar underscored was the prudent financial manner in which India worked its way out of the Wuhan virus pandemic: “We didn’t blow the bank in responding.”

This is something that economist K V Subramaniam eloquently elaborated upon last week in an interview — the Modi government avoided the inflation trap that a number of developed economies have fallen into this year because India tailored aid schemes to deserving recipients through a globally unique digital process rather than ‘blowing the bank’ through gargantuan, blind stimuli, as America did last year.

Speaking about the Ujjwala Yojana, which replaced firewood with cooking gas in 80 million homes, Jaishankar said this was akin to changing Germany’s kitchens in the space of a few years. Note how he employed a Western analogy to a Western audience, to highlight the sheer scale and scope of the numerous welfare programmes undertaken by the Indian government.

The second point he stressed upon was that Europe needed to pay more attention to other parts of the world rather than fixating on its own issues. The geopolitical and economic consequences of the Russia-Ukraine war was that there is now a fuel crisis, a food crisis, and a fertiliser crisis, whose global impact includes the very welfare schemes in India that he spoke about.

Similarly, the mess Europe and America left behind in Afghanistan was now on India’s head. And the belligerence demonstrated by China along the Indian border was of a level not seen since 1962.

But his interviewer was more interested in finding out why India hadn’t joined the West to sanction Russia.

Why was India buying more oil from Russia instead? Did India really expect the West to come to her aid against China if India undermined Western sanctions on Russia? Which axis was India with, and against which? Wasn’t India funding the war by buying discounted Russian crude? Wasn’t that profiteering?

That’s when Jaishankar changed gears. In a series of languid precision strikes, he proceeded to unravel a series of Occidental hypocrisies, dismantle a few stock anti-India narratives, and debunk Western misconceptions.

If India buying Russian crude was ‘funding the war’, then Germany buying Russian gas was that too. If Europe could announce fresh sanctions on Russia but exempt hydrocarbons to avoid burdening their populace, then how was it wrong for India to do the same? “People need to understand that if you can be considerate of yourself, surely you can be considerate of other people,” he said.

Regarding China, Jaishankar made it clear that India was perfectly capable of handling the situation on her own.

On the matter of wheat, he revealed that the Indian government was forced to step in and curtail private exports because foreign traders were trying to corner the Indian wheat market and stockpile grains for sale at premium rates. This couldn’t be allowed since it was hoarding by any definition, and would deprive poorer countries that desperately needed that wheat, or placed an unaffordable burden on their needs.

Then came the coup de grace: Jaishankar asked that if there indeed was such a critical shortage of crude oil globally at present, what was preventing America and Europe from allowing Iranian oil to come into the market. “They’ve [The West] squeezed every source of oil we have, and then say, guys, you must not go into the market and get the best deal for yourselves.”

This was an epochal moment because it was the first time that an Indian politician of such seniority had disrobed the West so brutally of their hypocrisy over Iran. Twisting the knife in further, he asked about Venezuela, another major exporter whose crude oil production had been severely reduced through sanctions.

This is a point that Swarajya has been making for years, that the global oil shortage is, in fact, a glut. An illusion of a shortage was created by serially sanctioning major oil exporters like Iran, Libya, Venezuela, and now Russia to promote production from shale plays in America, with an eye on the European and Asian markets.

Indeed, the stated American end point of the Russia-Ukraine war is that it will replace Russia as Europe’s principal energy supplier. To hear the Indian foreign minister say what he did in Bratislava is, therefore, robust validation enough.

Now, we shouldn’t read too much into Jaishankar’s Iran reference, or jump to infer that something is cooking between New Delhi and Tehran. But we also have to admit that this is the first time India has spoken so bluntly in public about the way in which Iran has been treated so conveniently by the West as a pariah state for decades, and it will have dividends.

Besides, Iran’s foreign minister, Hossein Amir-Abdollahian, will be making his maiden visit to India next week, after having taken charge last year. This follows a visit to Kabul earlier this week by J P Singh, the joint secretary in the foreign office in charge of the Pakistan-Afghanistan-Iran division.

Effectively, what Jaishankar sought to explain at Bratislava is that India will not be manacled by blocs or labels. Terms like “neutral” and “non-aligned” have lost their meaning because they, too, are essentially binary by nature. Thus, a country could be fully aligned with another, partially, or not at all, or neutral, or indifferent, or any, or all of the above. And it could choose to do so, at the same time, with multiple countries whose mutual relations vary across the spectrum, because its objective is the achievement of its national interests.

It’s not like America and the West took India’s approval before rupturing political and economic links with Russia while hanging Ukraine out to dry. Indeed, on the contrary, India advised against this course of action, in public, and warned that this would lead to various upheavals elsewhere.

If, after that, they whine that India is not toeing their line in sanctioning Russia, then the repeated putdowns they get from Jaishankar are the least they deserve.

Bottom line: the more these nations persist with their moralising and virtue-signalling, the easier it will be for Jaishankar, and India, to dismantle institutional hypocrisies and expose those powerful narratives for what they really are.