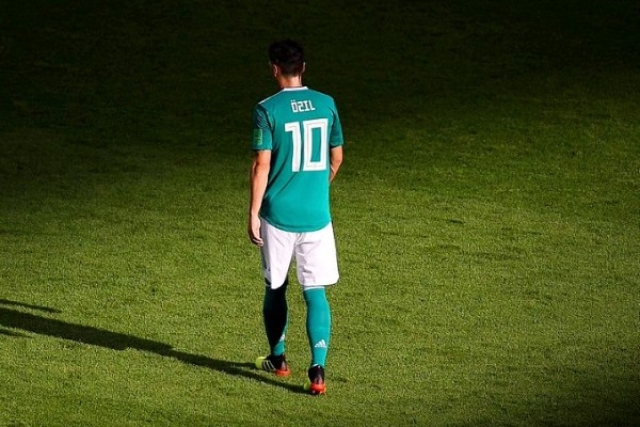 Mesut Özil during the last match played by Germany in the World Cup 2018. (pic via Twitter)

After a month of football frenzy surrounding the 2018 FIFA World Cup in Russia, the first weekend following the tournament was expected to be a dull one. Saturday was slow, Sunday was expected to be slower, for most players and also fans who were weary after the non-stop month-long footballing action. But it wasn’t to be.

Three tweets from the German attacking midfielder, who is among Germany’s most decorated footballers, Mesut Özil were about to rock much of the footballing world and its epicentre, Western Europe, in particular.

Özil would play for Germany no longer. Feeling targeted and victimised, he had called it quits.

The tweets transcended sport and waded deep into a civilisational question that much of Europe is facing. About identity. And multiculturalism. Events in Germany have forced Europe to face several uneasy questions, some that the societies probably would have preferred not to answer.

Some background. Germany were among the top contenders for the 2018 World Cup. Placed in a relatively easy group, Germany’s place in the round of 16, or even the round of eight, was all but certain. Few expected any less from the 2014 world champions. However, in one of the most shocking upsets of the tournament, Germany crashed out of the group stage, finishing last in its group behind Mexico, Sweden, and South Korea.

Unsurprisingly, the crash sent shockwaves passing through the football-crazy nation. Tough questions were asked, some very direct. However, at the centre of the racket, just like the German footballer owing to his playing position, lay Özil. Media, particularly the German-language media, wanted answers. What went wrong? Why couldn’t Özil create the slick openings he was expected to? Was Özil more inclined to play for his club, Arsenal, than Germany? And in muffled voices, it was asked, where lay Özil’s commitments?

But why was Özil at the centre of the debate? Other members of the Die Mannschaft – as the German football team is known – too were footballing greats and, on a good day, could potentially turn the tide of a game single-handedly. Several observers have criticised Özil alone. This has led Özil to ask if it was who he was, rather than his performance, that led to the intense media scrutiny on him.

So who is Özil? No easy question. Is he a German who was the pivot for the 2014 World Cup-winning team? Or, is he the Turkish immigrant who failed to deliver when Germany needed him the most? There the question of identity rears its head.

To state his origins, Özil is a ‘third-generation’ Turkish-German, meaning he is an ethnic Turkish Muslim, but even his parents were born and raised in Germany. While this may seem enough to most, others question Özil’s actions outside the field, as well as on it.

With the advent of his career as a German international in 2009, people had begun to question why he didn’t sing along to the German national anthem. Although not much of an issue back then, Özil had felt obliged to say, “Although I’m not singing along, I identify myself 100 per cent with Germany.”

“While the anthem is being played, I pray, and I am sure that this will give us strength and confidence to drive the victory home,” Özil had again clarified in the build-up to the 2018 World Cup. However, at a time when Germany is beginning to cope with its new multicultural identity, the footballer’s actions have come increasingly into focus and become a subject of debate.

To add to this, Özil has never shied away from posing with the Turkish President Recep Tayyip Erdoğan, someone who is seen as a dictator in the garb of a democratically elected leader by several Western European liberal democracies. Germany is no different. And when Özil publicly posed with the Turkish President just before elections in Turkey were about to be held, to many Germans, the meeting seemed to be symbolic of his support for the ‘dictator’. Since Özil is a popular figure among ethnic Turks in Germany, allegations were made that the meeting was in fact carefully planned to send a message to the 1.4 million Turkish voters residing in Germany.

To add to the country’s wounds, Özil had released his statements in English. Whom exactly was Özil addressing? Germans, whom he represented, surely would have felt more at ease hearing him in their language. And to be fair, although brewing up for some time now, the issue was hardly being discussed outside Germany, in German. To some, it was outright disrespectful.

For his departure though, Özil has blamed Reinhard Grindel, the president of the German Football Association. Özil has said that it was the treatment he received from the football association that made him “no longer wear the German national team shirt”. Grindel, Özil says, should have never been allowed to lead the association owing to his “racially discriminative” background, quoting his statement on multiculturalism in 2004 – “a myth and a lifelong lie”.

This push and pull represents the struggle Europe is facing today. Immigrants are the new reality in European societies that, till recently, were comfortable with their largely homogeneous cultures within the secure boundaries of their nation-states.

Can immigrants ever be completely naturalised in their host countries? Human beings are complex and they may like to hold on to their identities, however much faded they get in memory. So can a Turkish-German ever completely represent the German team? Or where would the German team, or the French team, for that matter, have been had it not been for its immigrants?

Better off or worse off?

Although voices on both sides are strong, these are questions that European societies are still struggling to answer.