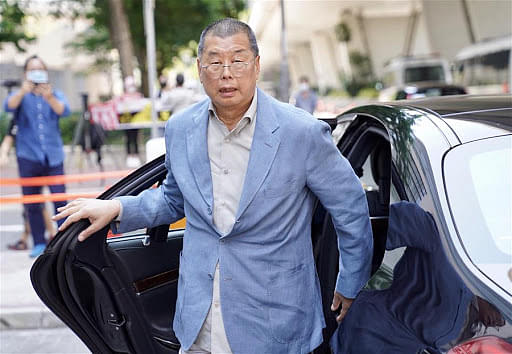 The board of Next Digital Ltd, which owns Hong Kong’s popular daily Apple Daily, announced today (Jun23) that the pro-democracy publication would close on June 26.

Apple Daily will stop publishing online from midnight. It will publish its last print edition on Thursday (Jun 24).

The board of the media outlet on Monday (Jun 22) had said it would shut down the newspaper’s operations by Saturday (Jun 26) if Hong Kong authorities do not lift the access to the company’s bank accounts following the arrests of senior editors and executives.

Apple Daily, owned by now-jailed media tycoon and pro-democracy activist Jimmy Lai, has been hounded by the government for more than a year now.

Lai, who was also the publisher, is a vocal critic of Chinese communist party. He was first arrested August last year under the provisions of city’s draconian national security law that was imposed by Chinese government in June 2020.

Lai, an hugely influential figure in Hong Kong, took an unapologetically pro-democracy position and was a fierce critic of Beijing.

Lai’s newspaper earned the ire of city’s pro-Beijing leadership during the months of massive peaceful protests and violent clashes with police that rocked Hong Kong in 2019.

Lai was arrested under the draconian new law for alleged collusion with a foreign country to endanger national security. He also faces charges of uttering seditious words and conspiring to defraud.

Lai had met the then US Vice President Mike Pence and Secretary of State Mike Pompeo in Washington DC to discuss the controversial extradition bill and the status of Hong Kong’s autonomy under the ‘One Country, Two Systems’ framework.

Lai along with other prominent pro-democracy activists have frequently urged U.S. lawmakers to pass pro-Hong Kong legislation such as the Hong Kong Human Rights and Democracy Act.

In Aug 2020, the U.S announced imposed sanctions on Hong Kong Leader Carrie Lam and leading officials of Chinese Communist Party for their involvement in stifling political freedoms in Hong Kong.