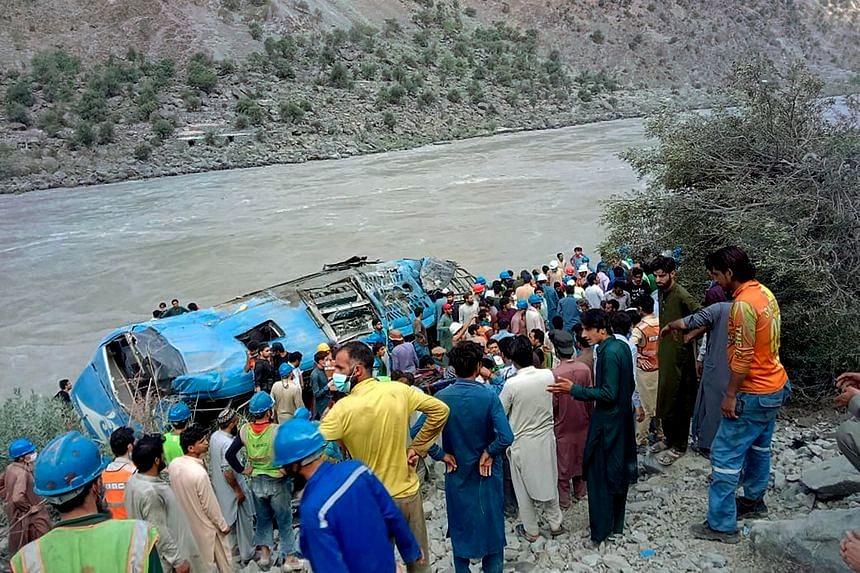 Wreckage of the bus.

Pakistan has yet again changed its stand on the bus blast that killed nine Chinese engineers working in the country on 14 July.

Pakistan had initially labeled the incident that killed at least 13, including Chinese nationals and Pakistani security personnel, a "cowardly attack".

However, the country began downplaying the incident only a day later, saying it was a result of a "mechanical failure" in the bus, even as the Chinese side continued to call it a "bomb blast".

The blast took place on 14 July in a bus carrying dozens of Chinese nationals and Pakistani security personnel working at the Dusa hydropower plant site in the remote upper Kohistan region of Pakistan in the western province of Khyber-Paktunkhwa. The Dusa hydropower plant is part of the China-Pakistan Economic Corridor or CPEC, the flagship project of Beijing's Belt and Road Initiative (BRI).

Now, two days after the blast, Pakistan appears to have changed its tune again, possibly under pressure from China.

“We have asked the Pakistani side to lose no time in conducting a thorough investigation, properly transfer and treat the wounded, strengthen security measures, eliminate security risks, and ensure the safety of Chinese personnel and projects in Pakistan,” Chinese foreign ministry spokesperson Zhao Lijian has said amid reports of pressure on Pakistan from China to find and punish the perpetrators of the bus attack.

Pakistan tried to downplay the attack

On 14 July, Speaking in the National Assembly right after the incident, Adviser to the Prime Minister Imran Khan on Parliamentary Affairs Babar Awan had termed it a "cowardly attack" saying it would "not divert attention from the special initiatives between Pakistan and its neighbours".

However, just hours later, Pakistan's Foreign Office, which works closely with the Pakistan Army, said the incident was a result of a "mechanical failure" in the bus carrying Chinese nationals.

The bus, Pakistan said, "plunged into a ravine after a mechanical failure resulting in leakage of gas that caused a blast".

China, however, called the incident a "bomb attack" and demanded that Pakistan take strict action against those responsible for it.

"China is shocked by and condemns the bomb attack in Pakistan's Khyber Pakhtunkhwa province which caused Chinese casualties...," Chinese Foreign Ministry spokesman said on 14 July, the day of the attack.

"China has asked the Pakistani side to thoroughly get to the bottom of this as soon as possible, arrest the perpetrators, severely punish them and earnestly protect the safety of Chinese personnel, institutions and projects in Pakistan," he added, responding to a question.

"This is clearly an act of terrorism that has been carefully planned and was supported by information," said an editorial in Global Times, a tabloid linked to the Chinese Communist Party’s People's Daily.

The inconsistency in Pakistan's statements on the incident and the fact that China has taken a drastically different stand suggests that Pakistan could be trying to underplay it, experts said.

Pakistan, experts have noted, wanted to downplay the attack as it brings to the forefront the resistance within the country to CPEC and the large Chinese presence that it brings.

Communities in remote parts of Pakistan, including Balochistan, have been against BRI projects in the country because they have been excluded from the economic benefits derived from them, reports say.

In Balochistan, which has rich mineral and natural gas reserves but remains the poorest region in Pakistan, locals have accused China and the Pakistan Army of usurping their land and resources without sharing the benefits.

Most of the jobs and economic opportunities created by investments from China have gone to Chinese nationals and Pakistanis from the richer Punjab province, locals in Balochistan say.

"The Baloch people rightly believe that these...Chinese projects have not given them anything. China takes away 91% revenue from the Gwadar port, while the rest goes to Pakistan's federal government. The locals in Gwadar don't even have access to clean drinking water," Pakistani economist Qaiser Bengali has said.

Chinese workers, who are based in the country to supervise and build infrastructure projects, have been attacked in the past as well. Chinese-funded projects have also come under attack.

Earlier this year, a luxury hotel in Balochistan's Quetta, where the Chinese ambassador was reportedly staying, was attacked.

In 2018, a suicide bomber, allegedly belonging to the Baloch Liberation Army, attacked a bus which was ferrying 18 Chinese mining workers in the province. The Chinese consulate in Karachi was also attacked the same year.

In May 2019, the Pearl Continental Hotel in Gwadar, where China has been building a port and a business hub, was attacked.

Under pressure from China, the Pakistan Army has cracked down on resistance groups in Balochistan. Security for Chinese workers and engineers has also been increased substantially.

The 14 July incident has once against raised questions on Pakistan's ability to safeguard Chinese workers and multibillion-dollar projects in the country.