An Open Letter To Mohan Bhagwat, Chief Of The RSS 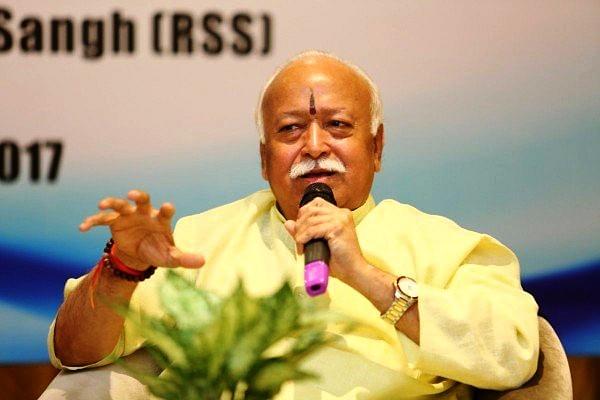 As I write this, Delhi is voting in the sixth phase of this massive election, and hopefully we will all see Prime Minister Narendra Modi come back to power for another five years.

Many Hindus, including myself, take this election to bring back Modi as a “battle to protect the Hindu civilisation” from decline in the land of its birth.

Tens of millions of us had moist eyes when we saw Modi ji on TV take a dip in the Ganga and chant ‘mantras’ during the Kumbh Mela earlier this year. In the pursuit of ‘secularism’, the Indian state and its “elected heads forgot that they are inheritors of the thousands of years old Indian civilization” and that this nation bereft of its spiritual roots will simply be a lump of land, soul-less, bereft of its core values. They forgot that the foundation of this nation has been the Hindu values upon which have risen the world’s greatest faiths and religions, and have sustained peacefully, several others which entered from the West.

Finally, in Modi, we have a practising Hindu as an elected Prime Minister, not ashamed of demonstrating his Hinduness (and, on the contrary, proud of it). This has been rejuvenating.

However, I wish to draw your attention to a few issues, which will continue to tie the Hindu society down in a quandary, and prevent its reinvigoration even if Modi ji were to come back to power.

1 Articles 26 To 30 Of The Indian Constitution

a) Article 26 promises freedom to all religions in India to maintain institutions for charitable and religious purposes, and manage the affairs of their religion without interference of the state.

While Article 26 is being applied to all religious minorities in India in letter and spirit, Hindu religious institutions are being subject to endless interference from the Indian state. From “government appointees sitting on temple boards to interference in management of temple-owned lands”, Hindu Religious and Charitable Endowments (HRCE) Department and such acts implemented by nearly all state governments across India ensure “Hindus cannot spend the temple-money (hundi donations or land rentals) for promotion of their Dharma” and activities dependent upon successful running of temples — such as supporting small temples, build and maintain Veda pathshalas, orphanages and gaushalas. “Temples are the mainstay of Hindu Dharma. HRCE and such government departments are designed to debilitate Hindu Dharma.”

b) Article 30 guarantees all minorities that they will be free to establish and administer educational institutions without interference from the government, “even if they are funded by the government".

This means that Christian-run schools, with land allotted by the government, can have church prayers for all students, and Jamia Milia Islamia, a university ‘fully-funded by government of India’, can have a mosque inside the college campus and start each class session with invocation of Allah. Fair enough.

Shockingly, institutions run by the ‘majority Hindu community’, based on the limitations imposed by Article 28, “are not allowed to function according to their religious preferences”. This means that a Lingayat or Chinmaya Mission institution, with land allotted by the government, cannot be allowed to teach the wisdom of the Gita as part of its curriculum. The recent case against starting the morning invoking the Asato Ma Sadgamaya in Kendriya Vidyalayas is because of “this constitutional discrimination against the Hindus”.

Only an apartheid state discriminates against the majority. This must change. There are constitutional amendments to articles 26 to 30 recommended in the now lapsed Dr Satyapal Singh Private Member Bill. These must be adopted by the new government.

With the temple money not available to Hindus for protecting and spreading their religion, and on top of it this massive asymmetric influx of foreign funding for spreading Christianity, Hinduism is being killed slowly but surely. This must change.

#HinduCharter, a project started by Hindus from all over the country, demands that all 'institutional’ foreign-funding must be banned.

Only NRIs/OCIs/PIOs however, in their individual capacity, must be free to donate to Indian religious institutions  —  including that of all minorities.

3. Muslim Population Explosion In India, And The Urgent Need For Large-Scale ‘Ghar Wapsi’

As societies around the world urbanise, they produce less and less children. In Europe, the US, Australia each couple is producing 1.3 to 1.8 children. The population replacement rate is 2.1 children per couple.

Hindus are producing 2.2 children per couple, barely at replacement rate. However, “the Muslim population in India is producing 3.4 children per couple including in rich and educated states such as Kerala”. This trend is no different from Muslims in Europe who are growing at similar rates.

If this is allowed to continue, then India is inevitably going to become a Muslim majority nation. Our liberals can continue to argue about whether it will take 50 years or 200 years. The demographic change of India will be inevitable.

Asking Hindus to produce more children or forcible birth-control of Muslim population of India are not practical solutions.

The only feasible solution is to call for large-scale ‘ghar wapsi’ of Indian Muslims. Millions of Muslims in India are aware of their Hindu roots and to date (proudly) retain references to their jatis in their names. Asking Muslims to feel proud of their Bharatiya roots and call them swadeshi Muslims is not good enough either.

Millions of Muslims in India will return to Hinduism if offered open platforms and processes for their shuddhi, and a way to return to their original jatis. Hinduism enables formation of new jatis if there is a lack of acceptance among any mainstream jatis. Marriages of their daughters, which is the biggest problem for returning Muslims, can be done within these multitude of newly-formed jatis.

Rashtriya Swayamsevak Sangh (RSS) is the only non-governmental organisation in the country capable of large-scale mobilisation of resources for enabling reconversion of Indian Muslims to Hinduism. No force. Only an open invitation and a formal institutionalised process of re-entry and support structure post such return. The RSS must set goals such as “10 per cent of Indian Muslims reconverted to Hinduism”.

After all, propagation of religion is a constitutional right offered to all religions in this country, including Hindus.

This is an urgent call of the hour. If the RSS does not open its arms to Muslims wanting to return to Hindu dharma, RSS as well as Hinduism will perish in the land of its birth. Even blaming RSS for not acting in time will not remain an option, for without Hindus, the memory and contribution of the RSS will be shoved into the dustbin of history.

Before I end, I must share with the readers of this letter what Dr Hedgewar had to say as the basis of forming the RSS:

This open letter first appeared on Medium, and has been republished here with permission.