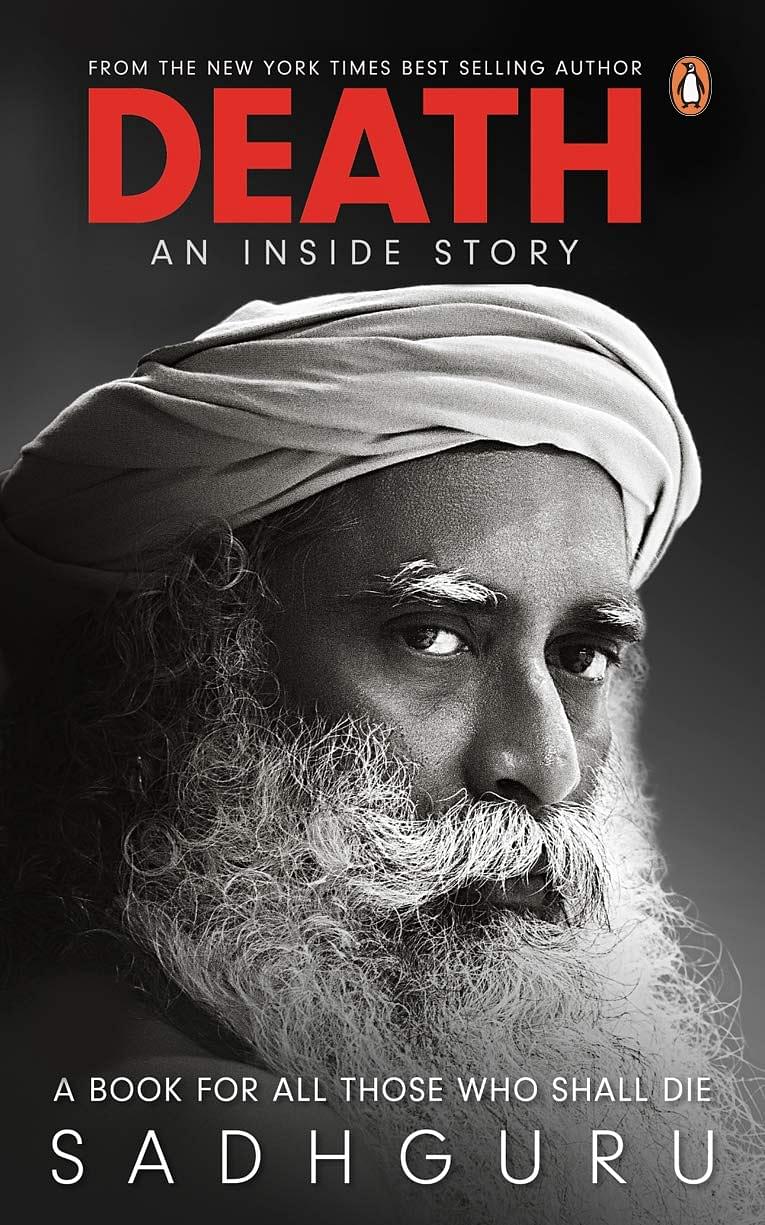 Death is often referred to as an enigma or the last frontier to be conquered or the final mystery to be solved and so on, because even today, humanity has very little knowledge about the hows and whys of it.

So, a new book on Death, especially by a much-followed Guru, piques one’s curiosity and you hope that there is some new ground covered in it.

Sadhguru’s book is titled: Death: an Inside Story and comes with a cheeky by-line: A book for all those who shall die! is published by Penguin Ananda in India in February 2020 and has been topping their bestseller list on Amazon since then.

When it comes to death, basically, have been three kinds of books in the market. The first — and the oldest — are scripture-based.

Being based on religious teachings, these books quote and interpret what religions say about death, offering no additional clarity.

On the other end of the spectrum are the new-age books. Being based on no particular scripture, what they offer is mostly a cut-and-paste, feel-good sermon.

Then, there are books which are philosophical expositions of death.Debated and discussed in limited circles, they offer next to nothing to curious people.

In the recent past, we also have a fourth category. These are books, mostly by medical professionals, present cutting-edge science related to Death and Dying.

Usually, they limit their scope to one or two specialties alone. While they are an interesting read, they make no pretence of presenting a complete picture. In that sense, Sadhguru’s book is unique because, as suggested by the title, it is an inside story.

Everything he says in the book is drawn from his understanding and experience. Neither does he quote nor does he seek the support or validation from any scriptures.

The book begins with the inevitability of death and how it is the most fundamental question.

An interesting episode from his childhood, where he attempted to find out the truth about death, first hand, by swallowing a bottle full of sedatives from his physician father’s supplies, makes the point that we are innately very curious about death.

Cutting quickly into his adult life as an adept yogi, Sadhguru then presents the details and the stages of the process of death from a yogic perspective.

For people who have been led to believe by modern cinema that Death is something that happens instantly (before you complete the most important sentence in the plot of the movie), Sadhguru says that there is no such thing as a sudden death and it is a long process that sometimes can be interfered with and reversed.

The fact that real-life observations corroborate well with this model lends additional credibility to this theory. An interesting takeaway from this book is that there are different kinds of deaths and that no two deaths are the same. The book then elaborates ways of attaining a good death.

One of the important contributions Sadhguru makes in the book is to explain the relationship between death, samadhi and mahasamadhi — all too confusingly close terms heard often in spiritual circles.

This book is part treatise and part autobiographical. For example, while narrating the stories of a few cases of mahasamadhi, Sadhguru explains how his wife, Vijji attained mahasamadhi two-and-a-half decades ago.

Then there is this other time when he was bitten by a cobra and how he managed to pull himself out of it.

When he talks about rebirths and reincarnation, he traces back the four lifetimes of his before this one. But Sadhguru is not a fan of past life explorations and cautions us against it.

Further, while talking about ghosts and spirits, which he says are the by-products of Death and Dying, the personal encounters he had with them, make an interesting read.

If nothing else, one learns two important things from the book. One being that death is something that one can and should prepare for.

This is a journey you do not want to go unprepared on! Scattered around the book, he talks about different preparations one can make for one’s own death.

The other significant thing one learns is that it is also possible to assist someone on this journey to a limited extent. Explaining the need for after-death rituals, Sadhguru says, “As we have responsibilities towards the living, we have responsibilities towards the dead. Within a limited period of time after Death, there is room for impacting the Dead.”

He then goes on to add: “Everyone dies, and at some point or the other in our life, we all will lose someone who is dear to us. So, we would definitely like to see that something nice happens to them.”

He lists a series of measures that can be taken after a person has died, which can go a long way in making their journey more pleasant and meaningful.

In the last chapter of the book, Sadhguru goes on the full Guru mode. Expositions and analogies are cast aside, and he directly addresses the question of what he can and will do for his followers.

He assures that for people who have been initiated by him and for those who have “sat with him” in a certain way for even a single moment, there will be no rebirth. Yet, he extolls the followers not to be complacent.

He says, “We can make this life the last one for you but we cannot make this the most wonderful one. That only you have to do. For that, you must do sadhana. You must promise me that.”

While making it amply clear that he will not be “coming back,” he says he will be operational in a “minimal mode” for a good 80 years after his physical death so that he can “mop up” all those who have been touched by him.

The books ends with a very pregnant promise, “Once you made the mistake of sitting with me, in some ways you are already fixed, unless you really want to fall off and want to really go against it within yourself. Otherwise, in many ways, you are sorted. I don’t want to interfere with your life. But your death, I usually hold it in my hands . . .” indicating that he is not just creating an exposition on Death and Dying but also throwing his followers a lifeline for their graceful passing and a spiritually significant journey after that.

In terms of practical takeaways, the book is a mixed bag. Throughout the book, Sadhguru keeps dropping pointers as to how we can make things better for ourselves when the time comes.

But if you are looking for any kind of serious practices and interventions, the book is not the place where you will find them.

Or if you are looking for a magic mantra or a mudra that you can practice at home after reading the book, he demands more commitment and involvement.

However, there are references to a host of practices taught separately by his Foundation to deal with specific situations related to Death and Dying like coping with grief and suicidal tendencies.

One of the plus points of the book is it is immersed in day-to-day life. If you were born in the Indian subcontinent, the book can be a series of déjà vus, connecting a lot of dots from what your grandmother told you about death.

Sadhguru’s model of death and afterlife presented in the book successfully incorporates many bits of “common knowledge” into a comprehensive and credible theory.

But if you do not have this Indian advantage, elaborate footnotes and an extensive glossary at the end of the book seeks to help you out with this.

On the whole, it is certainly a book to start getting acquainted with the aspects of death that one will eventually face.

One can only say that a whole lot of information Sadhguru presents in the book about Death and Dying is very unique.