#Demonetisation: Make No Mistake, This Is Revolutionary 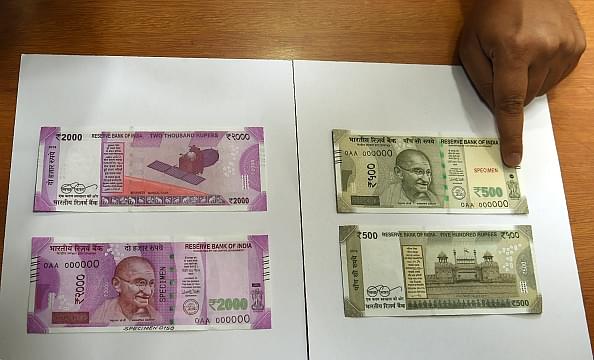 Samples of the new Rs 500 and Rs 2,000 notes are displayed at the Reserve Bank of India headquarters in Mumbai a day after the demonetisation announcement on 8 November. Photo credit: PUNIT PARANJPE/AFP/GettyImages

It was a nippy morning yesterday, while I made my way through the patchy roads to an old friend’s house, in Mewat, Haryana. I couldn’t make it to his sister’s wedding reception, earlier in the year, so decided to stop by before I headed to HarVa farm. No sooner than I made it past the two cows, went in and sat on the charpai in the verandah, my friends’ sister, sister visiting home, came out and offered me a glass of water. His grandfather smoked a hookah that just added to the warmth. Bajra (millets), the crop from last season was stashed in abundance in a room, spilling over onto the verandah.

After initial greetings, invariably the conversation wandered to what has been on everyone’s minds. Demonetisation. Meanwhile, Naval’s (the friend’s) mother served me a bowl of khichdi. The aroma of warm ghee on the khichdi filled the air. “It’s made of Bajra, very healthy for you in this season,” she said even as I reluctantly refused the loving hospitality. “It hasn’t affected us at all actually,” said Naval’s grandfather on demonetisation. “You see, everything we have, is grown here. The khichdi is made of Bajra that we just reaped. It has lentils that we grow as well. Ghee is made of cow’s milk. Green chillies grow in the backyard. Salt that we buy at Rs 3 a kg, once a year, is ground at home. They do not use the packaged salt. Most of our fuel is wood, cow dung and kerosene. We do need to buy diesel for the tractor. That’s usually once a month as we buy in bulk.”

What he was describing to me was a typical household in rural India. The fashionable buzzword for this is ‘sustainability’. Then there are those who don’t own land. They buy what they need from the landowners and producers.

One of the first steps this government took soon after coming to power was the implementation of the digitisation of land records bringing all transactions online. This was the first real blow to the real estate sector, since 70 per cent of all transactions were conducted in cash.

Five facts, gleaned from the 2011-12 agricultural census and 2011 socio-economic caste census need to be repeated here:

- 101.4 million or 56.4 per cent of rural households own no agricultural land

- Only 12.9 per cent, the size of Gujarat, of land marked for takeover from landlords was taken over by December 2015

- Five million acres, half the size of Haryana, was given to 5.78 million poor farmers by December 2015

While the land reforms themselves are a separate topic, and a rather important one, this will act in demonetisation’s favour, and eventually should be used in redistributing wealth.

If you grew up in pre-credit card era, you would be quite familiar with the term ‘baad mei’ (pay later). The students in most Indian colleges have a system of credit that goes on for a semester. The local vendors work on credit, which in turn, they get from the local baniya (financier). The result is that most of these local vendors remember the students for decades after they have graduated.

The domestic help segment and the manual labour in general, need to be cared for. Our driver would always ask for his salary in cash, even when we opened a bank account for him. When questioned about it, he said that banks have random, spurious charges that are hard to justify on his salary. However, the banks charge these on an ad hoc basis and no amount of cajoling can get them to waive off. Reputed banks are part of the racket. Banking reforms need to be implemented immediately after, if not in parallel.

A politician needs to be a clever strategist. Much as the feat, the timing and symbolism are equally important. History is replete with examples of demonetisation. However, much like a doctor doesn’t prescribe the same medicine for similar symptoms, rather for the cause; a politician needs to act similarly.

This seemingly insidious plan of demonetisation hasn’t upset the rural economy yet, at least amongst the hundred odd villages we’ve travelled across. The farmers that need to buy seeds get credit from the mandi merchants.

The rollout of such a plan given the pressing concerns of our times seems logical. The best way to root out the epidemic of terrorism that is being funded by fake Indian currency can be nipped in the bud by gutting the source. This seems to have worked well given the complete absence of stone pelting or terror incidents in Kashmir in the past week.

The second problem, of getting the black money hoarders to the books is a tactful play of game theory. Black money could be as a result of tax evasion or just not using the banking channels. Both are distinctly different problems. But the moment the hoarded currency comes into circulation, it is a part of the liquidity pool. If the money were to be used as a force for solving a social ill, besides being used as a financial instrument, several things come into play. Imagine a river going astray with shallow bed and swampy land. The first thing to make good use of the water would be to constrict the flow at a certain point such that enough pressure can be built in the flow itself, to drive the water with its own force. Much like this, the rationale of constricting the flow with a higher denomination was a smart move. More importantly, accounting for inflation and the mess of transportation would be sorted with a single stroke.

While only 6 per cent of black money is in cash, the drive for change of currency notes brings a large number of high-value notes back into the banks. By November 18, Rs 4 lakh crore were deposited in banks. As the liquidity increases, the bank balance sheets start looking better. The interest rates will soften and the lending rates will follow. Overall, this would be beneficial for the market. Gold will surge up in the short run but soften in the long term. Real estate will dip further as the black component in the real estate deals completely dries out. Rates will correct further and then it will likely rise in the mid to long term.

Short-term liquidity might be a bigger problem than originally anticipated. The eventual design of the Goods and Services Tax (GST) is also looking far more complex than originally envisaged. This could add to the complexity. More local traders are likely to move to digital platforms.

Could this have been done better? Maybe. Is this going well so far? Well, almost. A cruise liner moving in a direction will need to be swerved with adept manoeuvring if the captain sees an obstacle ahead.

Currency is as much a social programming tool as a financial instrument.

The colour magenta that dominates the Rs 2,000 colour scheme means universal harmony and emotional balance. A strong and inspiring colour, magenta can appear outrageous and shocking on the one hand and innovative and imaginative on the other.

Demonetisation may have upset some but it hasn’t hurt rural India as much as some claim it has. As Mahatma Gandhi once said, the future of India lies in its villages. Maybe demonetisation is India’s next Independence movement – as India gears up to celebrate 70 years of Independence – it will give freedom to many poor people and free the country from corruption.

Make no mistake. This is revolutionary. Success or not, time will tell. Execution is key. Buckle up.