For The Sake Of Ganga: Octogenarian Scientist-Turned-Sage Sits On A Fast Unto Death To Save ‘Sacred’ River 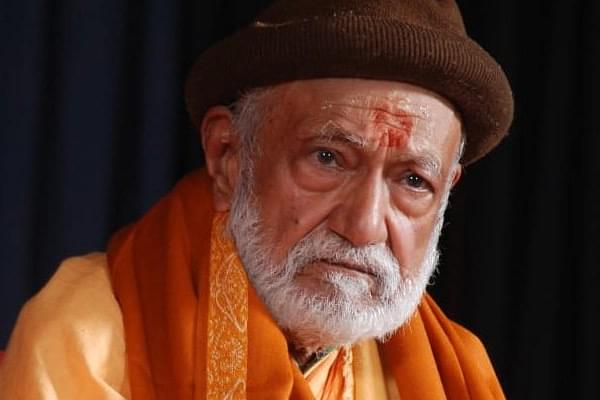 “As you may recall, I have been on a “fast-unto-death” taking only lime water with honey since Ganga Dussehra (22nd June 2018 CE) seeking protection of Ganga-ji's Aviral-ta – Nirmal-ta – Guṇavat-ta as well as Naisargika form by way of an enabling legislative act as well as three other requests for necessary action relating to conservation of Ganga. Today is 80th day of my fast.To this day, there is no meaningful action or engagement from the Government. I have decided, and I am declaring to you – if by Mahālaya Āśvin Amavasya, i.e. 9th October 2018 CE, there is no action till then and if I am still alive till then, in such a case, from the first day of Navratri, Āśvin Śukla Pratipada, i.e., 10th October 2018 CE, I will not only give up taking lime juice but also water completely and wait to give up my life. May Lord Ram protect my resolve”

This is what Swami Gyan Swaroop Sanand said in a statement to the press on 9 September 2018 CE. 86-year old Swami Gyan Swaroop Sanand (formerly, Prof. G D Agrawala of IIT-Kanpur, first Member-Secretary of Central Pollution Control Board), a scientist-engineer-sanyasi and above all -- “a devout Hindu” and “a Ganga-Bhakta” in his own words -- has been fasting for over past 90 days now at Haridwar. This is his sixth and what he calls as his final “fast-unto-death” - a Ganga Tapasya - for the sake of ensuring flows in River Ganga - addressed with great devotion, reverence,respect and earnestness by him as Ma Ganga/Ganga-ji - all through his writings.

In a sense, all of the fasts, starting from the first fast of Prof. Agrawala in 2008 CE to the latest fast of Swami Sanand in 2018 CE are in pursuit of Aviraḷ Dhāra (unbridled/uninterrupted incessant flow) in Ganga – especially the Himalayan source streams – Bhagirathi, Alakananda (and her feeder streams Dhauliganga, Pindar, Nandakini) and Mandakini. Aviraḷ Dhāra is a necessary pre-condition for Naisargika Dhāra of Ganga (that originary state of the flow which will increase its volumes of waters in plenty meeting the purpose for which the flow occurred).

As a devout Hindu, he reckons that all Hindus must fight to protect and preserve Ganga, even if one were unable to rejuvenate Her, because She is the richest of the inheritances since the times of Bhagirath, of India, that is Bharat – an ecological marvel and an epitome of Hindu culture. He sees all his efforts are towards that end by bringing in all his knowledge of science, engineering, culture and spirituality together. It is pertinent to mention that the Calligraphic Edtion of Constitution of India has 22 Illustrations of which the 13th Illustration is of a 'Scene from Mahabalipuram Sculptures (Bhagirath's Penance and the Descent of Ganga) – thus making Bhagirath and Ganga etched in national conscience as Constitutional entities.

His first three fasts were aimed at opposing the under-construction and proposed projects on Bhagirathi River because their completion would have resulted in the loss of the only pristine stretch of the flows of the waters of Ganga which remained untouched. These fasts and the associated movement built around it resulted in the cancellation of three hydro-electric power projects including the 90 percent complete 600 MW (150 MW x 4 units) Loharinag-Pala as well as the declaration of the approximately 135 kilometre stretch from Gaumukh to Uttarkashi as Bhagirathi Eco-Sensitive Zone under the Environmental Protection Act 1986 by the then Government of India in the year 2012 CE. Shri Pranab Mukherjee, the then Minister for Finance elaborated the reasons for this announcement in the following words: “...we have come to this decision keeping in mind the very special features and unique status of the sacred Ganga in our culture and in our daily lives. The holy Ganga is the very foundation and is at the very core of our civilization.”

Prof. G.D. Agrawala is known to be “a sterling and committed human being” for those who know him for over 50 years and a great teacher. One can get a glimpse of how his remarkable ability to instruct by way of his Statement on Fast which can be read here. It begins with the following stark reminder: “Firstly, Ganga-ji is a stream (dhāra). The most important quality of a stream is that it flows. If there is no flow, then it is not a stream; it may be a lake, pond, johaḍ (~tank) or a puddle — any such thing, but never a stream. As on today — 50-60 kilometres prior to Tehri Dam, 10-15 kilometres behind Srinagar-Alakananda Dam, as a matter of fact, even 2-3 kilometres before Maneri Dam or 1-1.5 kilometres before Uttarkashi-Vishnuprayag Barrage – can neither be said to be a stream nor can it be called as Ganga-ji.”

The statement defines how Aviral-ta is to be understood and this song captures it as part of a plea to the Prime Minister.

It emphasizes the importance of Aviral-ta for a river all through. The Statement also gives a background to the impact of development projects – especially, of hydro-electric power projects on the source-streams of Ganga. The Statement goes on to recount the flows in Ganga over time, and how most of the obstruction to the flows happen post-Independence even as freedom fighter Pt. Madan Mohan Malviya (awarded “Bharat-Ratna” by the current Government) led a remarkable resistance to such an obstruction that even the British respected the sentiments and agreed to sign an accord.

The statement is a strong critique on mindless Vikas (development) for short-term benefits to end up vanishing the most unique Ganga, with properties unparalleled to any river on earth.What makes Ganga Ganga? The article defines sacredness (pavitra-ta) of Ganga as arising from the most unique properties (guṇavat-ta) such as bactericidal properties that She has. An important contribution to the current discourse that it makes is by clarifying the conflation between Nirmal-ta (clear waters) and Swaccha-ta (cleanliness/purity) in the context of projects such as Namami Gange.

The Ganga Draft Bill for the enactment of which Swami Sanand is fasting now has appropriate definitions of Nirmal Dhāra (as that natural flow which has not been polluted by human interventions). These clarifications are in order for a proper direction for understanding the issue of Ganga Rejuvenation or Ganga conservation. As a person who has devoted his life for Ganga-ji, Swami Sanand reckons it is his responsibility to stake his life to see the translation of his knowledge to action.

Deeply affected by his current “fast-unto-death”, when his favourite pupil Aniruddha, an 8th class student in Bengaluru, wrote to him stating his wish to join the fast, he shot down the proposal through his letter written on the 16th day of his fast in the following words: “As I told you that I earned and accumulated all the scientific technical knowledge and practical experience over 75 years to lay everything down at the feet of Mother Gangaji. If I don't succeed even this time, let Gangaji wait for some forty years till my son and pupil Aniruddha is strong enough, resourceful, and renowned to take up that task I left incomplete.”

You may read the English translation of his third letter to the Prime Minister here that has the list of necessary actions for saving Ganga which are required for him to break his fast.

It may not be inappropriate to quote Puri Shankaracharya who states that he told Shri Amit Shah, the current BJP President, when he met him that: “The efforts of the government towards protecting Ganga-ji are like massaging a person suffering from cancer with fragrant oils to cure him.” It is on the advice of Puri Shankaracharya in the presence of Shri Rajnath Singh, the then BJP President in 2013 that Swami Sanand broke his fifth fast (for stopping constructions on Alakananda and Mandakini Rivers) with the assurance that the government under Prime Minister Modi shall act positively to address the issues pertaining to health, sacredness and uniqueness of Ganga-ji.

Will the Government act on the wise advice of Puri Shankaracharya and Swami Sanand? Or will Ganga-ji have to wait for another forty years as Swami Sanand's Tapasya is insufficient?