The Hadiya Debate: Why It Is Important To Draw The Right Conclusions 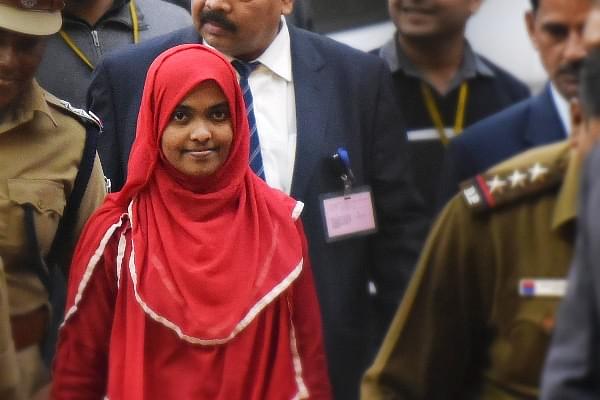 Hadiya at the Supreme Court after hearing on 27 November in New Delhi. (Vipin Kumar/Hindustan Times via GettyImages)

Let us call her Hadiya, and not Akhila. Given that she has already converted to Islam, we may do well to imagine that her decision was a conscious choice and that she did not convert due to an imaginary relationship with the real modes of social production. Whether her decision was conditioned by external factors (to the extent of brainwashing) such as Popular Front of India (PFI) activist Zainaba and prince charming Shafin Jahan is a matter of conjecture and interpretation. Whether the people mentioned above are brokers of a larger vicious pattern of love jihad or merely benign facilitators requires investigation. The honourable Supreme Court of India is into the job and we will have to wait to see if Hadiya’s or Shafin’s actions violated any law or if they are legally tenable.

I am not unduly worried about Hadiya’s psychology or the conditions that led her to do what she did. That is for the National Investigation Agency to establish and the honourable Supreme Court to decide. I would much rather let her be. I am interested in the way Hadiya's case has been represented in mainstream media (barring a few) and invested with binaries of feminism/patriarchy, agency/subjection, Hindutva/multiculturalism, toleration/intolerance etc.

My objective is to discover the underlying rhythm of such media expression, and also to critique the way Hadiya is mediated and came to us packaged in liberal English media both as news items, but more as columns and opinion pieces. This engagement reveals well-defined tropes around ideas of individual liberty pitted against family, community and other social institutions. The rest of the article will identify those motifs and subject them to scrutiny.

Hadiya As A Feminist Protagonist

Contemporary feminists have seen in Hadiya’s actions a revolt against patriarchy and parental control, something, which makes Hadiya quintessential feminist. In this narrative, any kind of control that tramples woman’s freedom is an abomination, to be decried everywhere; thus Hadiya’s father K M Asokan is that patriarchal evil, whose contact with Hadiya will reduce her subjectivity and limit her freedom. As ever, such feminists borrow from Western models of elite feminism prevalent in the 1970s North America, which saw family as a comfortable concentration camp and castigated the patriarchal desire of using the free labour of women in the household. By going against Asokan, Hadiya was challenging centuries old social conventions and so is a feminist protagonist.

So far so good; at least notionally. But what about the control exerted by Sathya Sarani on Hadiya, the cultural front of PFI, which has been found to be a conversion factory by independent media houses. Nobody knows yet as to why her husband Shafin Jahan has not been subjected to the same criticism by liberal media or why he has not been projected as an agent of patriarchy. If family is a concentration camp in Asokan’s household, it cannot be a space of liberation in Shafin’s.

When the Supreme Court had a conversation with Hadiya to know if she would like the state to fund her studies, she declined and asserted that her husband will take care of that. Contrary to the simplistic understanding of Hadiya as a feminist rebel and an advocate of freedom, she is actually a subjected being. She found liberation in marriage, which will bind her in another labour contract masquerading as marriage. Her conversion for the purpose of marriage cannot be an act of liberation and liberal media’s celebration of Hadiya is cheer-girlish rather than a space of objective analysis.

Hadiya As Symbol Of Agency

Associated with this trope of Hadiya breaking free from patriarchal prison house is the idea of free will or agency, which is celebrated in liberal discourses and is believed to be the foundation of a modern democratic order. Most media houses went gaga over Supreme Court’s interim decision to send her to her college and away from her parent’s house. Hadiya’s statement that she wants her freedom back was the headline of many news stories, analyses and opinion pieces. Here was a young girl, who values her freedom to a fault and so is an inspiration for all forward-looking girls. The whispering chorus reached a crescendo when an opinion maker claimed that one’s right to choose her sexual partner is of paramount importance and the absence of such right can make one a slave.

What was conveniently ignored was that while declining the need for a local guardian in her college, Hadiya demanded to meet her husband. Her appearance in Islamic clothing betrayed her cooption by another repressive discourse, where Hadiya’s subjectivity can be articulated only through specific attires. Nobody thought it proper to analyse as to why Hadiya as a symbol of agency so willingly sacrificed that agency to conform to a prescribed notion of womanhood by appearing in a hijab. Whether hijab was thrust upon her or she wore it out of her volition is not important; the fact is that Hadiya did so to make a political statement, ie to appear as Muslim. Not that there is anything wrong in it, but she is not the agentic woman she is made out to be. Her choice of hijab established that her agency is predicated on another tyrannical system and proved beyond doubt that her rebellion against patriarchal culture was another kind of conformity.

Hadiya As Victim Of Hindutva

Since Hadiya’s revolt is an established fact, for the liberal media, there must be something she is revolting against. We have already been told that it is patriarchal ideology. And what is patriarchy, if not a facet of Hindutva? In liberal narratives, Hindutva is the default universal villain, which not only pits one against the other on the basis of religion but also creates a mono-cultural understanding of social life. One can discern in such representation a sense of denial that such things can happen in Kerala; the assumption is that the Kerala model of communal harmony, literacy, health care, gender balance etc will neutralise Hindutva. Yet there is a simultaneous sense of mourning that Kerala may be slowly warming up to Hindutva’s promise. Given that popular sentiment in Kerala is against this inter-faith marriage, there must be a cause, something the liberal intelligentsia knew all along. That is Hindutva’s inroads into the god’s own country.

It is not recognised that Hadiya’s father is a member of one of the communist parties. What is also under reported is that the very conception of love jihad was the contribution of communists’ greatest ever leader in south India, V S Achuthanandan. The liberal columnists also forgot to highlight the threat received by the government lawyer P Narayanan, who was called Rashtriya Swayamsewak Sangh (RSS) agent and was threatened with dire consequences. Perhaps because of these columnists, RSS is often invented every now and then to create a fear of a doomsday, which will devastate the Edenic charm of Kerala. Those who know the political climate of Kerala know the consequences of such threats, the case of Professor T J Joseph being an example. Contrary to the much-flaunted Kerala model, the reality is that Kerala is the most fertile ground for Islamic State (IS) recruits and sympathisers as per Kerala’s own police department, the reason why it launched Operation Pigeon.

Hadiya As Symbol Of Religious Harmony

One of the reasons why this inter-faith marriage did not raise eyebrows in liberal circles is our understanding of Kerala as a progressive state, which seeks to go beyond tribal instincts of ethnicity or religion. Its progressive culture is attributed to the presence of communist parties. The belief that guides such assumptions is that communism trumps all social, cultural and religious divides. Thus it can boast of chief ministers from minority communities at regular intervals; the state also institutionally seeks to go beyond caste hierarchy by appointing Dalit as priest in government-run temples. By these indicators, Hadiya’s marriage would have produced appreciation among common people. If it is producing suspicion, liberal media must remind people that Kerala’s political culture is characterised by religious harmony and that Hadiya’s decision should be encouraged and replicated.

The fact of the matter is that communism in Kerala is steeped in local contradictions and is seen as a Hindu party in contrast to the Congress, which is seen as a ‘secular’ or a party of minorities. It is to pander to that Hindu sentiment that Achuthanandan had floated the idea of love jihad and in Hadiya case the communist state went to the court to justify the same. It is widely known that many of the RSS functionaries killed by the communist cadre are from Dalit groups, but since they are targets of class warriors, their death is a negative externality to achieve something bigger, ie communal harmony. The reality is that every communist member is acutely aware of his caste/religious identity and publicly acknowledges it when he falls a victim, as in case of Hadiya’s father Asokan. So neither Hadiya is a symbol of religious tolerance nor is Kerala a multicultural and cosmopolitan utopia.

Contemporary media creates the cultural universe we inhabit and the intellectual debates we engage in. The question is if ideas thus produced are intended to critically analyse issues at hand or to prescribe a framework where the liberal opinion-maker shapes and controls the way people imagine their life-world. For the liberal analyst, Hadiya is an individual and must be seen just as that, a bundle of rights. Such attitude to opinion making is realised entirely from the perspective of individual liberty, not from parents’ perspective or from familial/communitarian perspective. The ideas thus generated do not make sense to the common people.

For the mass of humanity, Hadiya’s is a story of disloyalty and betrayal. In the hinterlands of India and outside cocktail parties, it is Asokan, who is the victim. The story is too familiar: parents spend their life in bringing their children up, invest their emotions and wealth on them to make them capable, and children do not think twice to ditch them. By exaggerating individual liberty over familial trust and social stability, our opinion makers today are producing values with the intention to shock and awe and indulging in a kind of intellectual orgy. There is an inbuilt conviction that the more they mock and shock common men out of their common sense, the more intellectually profound they are.