The Waters Flow Again: How The Kumudvathi River Was Revived 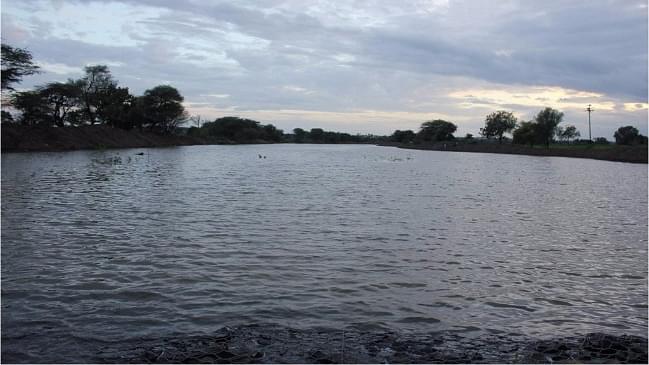 Gharni River, after it was rejuvenated

Its origin is just 50 kilometres from the IT city, Bengaluru. It is a tributary of the Arkavathi River, the source to the Thippagondanahalli reservoir, which used to supply 30 per cent of the water needs of the garden city two decades ago. Now it is non-existent, its over 100-stream network dried up, and the groundwater in all the villages surrounding the river basin having dropped drastically.

We are talking about the erstwhile Kumudvathi River in Karnataka, the drying up of which forced a large section of the rural population to either alter the cropping patterns and shrink the area under cultivation or abandon their lands and migrate to Bengaluru in search of employment.

The year 2007 also saw an acknowledgement of the growing water crisis, with Bengaluru facing a 20 per cent shortage of fresh water supply, the Thippagondanahalli reservoir fed by Kumudvathi River going dry.

The case of Kumudvathi River is, however, not alone. Many rivers, both small and large, across the country, have either dried up or are facing far less flow, with depleting groundwater in the surrounding regions jeopardising agriculture besides encouraging the ensuing rural-urban exodus.

The year 2016 saw a third of all districts in the country being declared as drought-affected. In Maharashtra, lakhs of litres of water were transported by trains to address this drought. This year it is the reverse, with floods reported across many states of the country.

What is causing this phenomenon? While many factors come to the fore, the chief pointers are deforestation, urban encroachment, quarrying and yes, over-exploitation of groundwater; in short, mindless, irresponsible environmental degradation.

The natural hydrological cycles that operate in a region depend on the natural activities of people living at the river basin. For availability of water and sustained river flow in a basin, there needs to be an understanding of natural processes such as rainfall patterns, topography, drainage network as well as the geohydrological situation. The imbalance of hydrological cycles depletes groundwater as well as surface water over the long term, even when there is good rainfall.

Observing this scenario, February 2013 saw a large team of volunteers from the Art of Living (AOL) taking it up as a challenge and deciding to devote their weekends to travel to the villages in the river basin of Kumudvathi and start working on the plan of rejuvenating it by using a scientific methodology. Going by this approach, the volunteers built 439 boulder checks, de-silted over 20 traditional stepwells, constructed 434 recharge wells and 71 water pools, built 45 recharge borewells, planted more than 425,000 saplings, besides spreading awareness to over 75,000 people residing in over 100 villages surrounding the river basin.

Incidentally, these methods of rejuvenation opted by AOL relates to age-old techniques which involves revival of natural water sources in the form of springs, base flow in the stream network, groundwater regime and sustenance of surface water bodies. This includes tree plantation and river bed widening, digging wells and soak pits to increase groundwater retention, besides a host of other interventions.

Explaining the logic of this age-old scientific techniques was Dr Lingaraju Yale, director of AOL’s River Rejuvenation Projects. “The flow of rainwater is slowed at the source of rivers and allowed to percolate into the ground through boulder checks and recharge wells. Further, fractures in the earth’s crust are identified through remote sensing and injection wells are built to increase groundwater levels.”

The result, the oncoming rains saw water levels in many stepwells rising, much to the joy of the local villagers. The Kumudavathi River project has been entirely driven by a huge volunteer base crossing 2,700, aided by CSR (corporate social responsibility) funds to the tune of Rs 12 crore. Currently, over 75,000 people have directly benefitted as a result of the efforts.

Similar parched conditions are seen in the Vedavathi River, which emerges in Hoskote (Lakya Hobli) in Chikkamagalur Taluk and reaches Andhra Pradesh, flowing through Chitradurga and Kadur. AOL initiated the Vedavathi River Rejuvenation project as a nodal agency under the National Guaranteed Employment Scheme. The government lent Rs 7 crore for this project. Under the 10 village panchayats in Lakya Hobli, there are 49 villages, which occupy a land cover of 377.52 sq km, who will benefit from the project.

Water used for daily household chores and the rainwater is collected in these boulder pits, water percolation wells and basins through canals. Steep descent points have been identified and boulder checks built to reduce the speed of water. Water spots have been identified and injection wells dug at strategic spots. Dense tree plantation will be carried out to enable natural flow of water round the year. Over 3,000 saplings have already been planted.

However, the efforts made so far towards increasing groundwater level, saw the first spell of 20 cm of rain earlier this year bringing in three inches of water at 110 feet. Usually, to find water, one would have to go beyond 450 feet. And the latest bout of rains has got the Vedavathi River once again flowing, delighting the farmers, and the concerted efforts of the last four years paying off.

Thamme Gowda, a farmer from Birenhalli village in Chikmagalur who had been living with a dry borewell for the last 10 years, pointed to his farm and the recharge wells built around it. “Before the recharge structures were built, water was found beyond 450 feet only. Now I strike water at 30 feet. This has increased the yield of my farms and my profits to 1.5 to 2.5 lakh per year as compared to earlier 30 to 40,000.” Over 15 lakh people stand to benefit once this project is completed.

Similar intervention was made in the Manjara River rejuvenation, which saw unique community participation where the citizens of Latur pooled in Rs 3 crore from their household savings, enabling the first phase of the project involving a 14km stretch of the river to be de-silted in a span of just five months to address the immediate water crisis. Work is in progress with AOL working with the state government, district administration and the Hans Foundation to scale up the operations so that the entire basin of the Manjara River is covered.

Palar River is yet another ambitious inter-state river rejuvenation project taken up by AOL, which will fetch water to the parched districts of Karnataka, Andhra Pradesh and Tamil Nadu besides creating a fine model for inter-state river management. Currently, 348km of the river basin in the Chikballapur district has already been treated and interventions have moved to the Kolar district in Karnataka and Vellore district in Tamil Nadu. The River Rejuvenation team of AOL has recently initiated revival of two more rivers in Tamil Nadu, the Saraswathi and Kausika.

During a recent visit to Vedavathi and Kumudhvathi river basins, AOL founder Sri Sri Ravi Shankar emphasised the need to grow trees such as neem, banyan, kadamba and peepal, which attract rains, instead of eucalyptus and acacia trees that deplete groundwater. Speaking against the de-notification of lakes, Shankar stressed on even the smallest of water bodies to be conserved.