Who Is Trying To Sabotage Our Light Combat Aircraft, The Tejas? 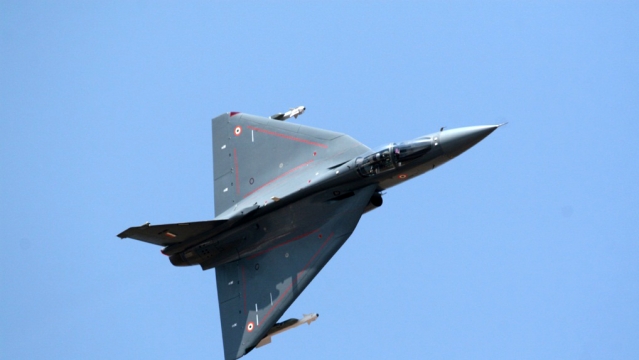 LCA Tejas at a demo.

In the second week of November 2017, a flurry of media reports started appearing in the Indian media alleging that unnamed “Indian Air Force sources” had made it known that the Tejas light combat aircraft was unsatisfactory and that India would have to import one of two fighter jets that the sources felt were better.

To the Indian public – suspicious as we are about kickbacks paid by arms dealers to politicians, bureaucrats and serving or retired forces personnel – these reports ring a very loud alarm bell. Someone is trying to kill the Tejas – which is now a state-of-the-art 4-plus generation fighter.

We the public have watched with deep concern as the highest offices in the land were embroiled in the Bofors gun scandal – ensuring that the army got no new artillery for two decades. The Eurocopter VVIP helicopter scam, where the specs were mysteriously changed to favour one company, is still ongoing with a retired air force chief, no less, having himself implicated.

The needle of suspicion now is pointing steadily at some import-favouring group – possibly in the ministry, forces, or groups who would like to see Indian innovation and manufacture fail. It behooves us to call out this egregious nonsense as soon as possible and haul up and expose the guilty pushing this outrageous scam on the nation.

Apart from the needless anonymity of sources in the “news” reports, and the shooting of the Tejas from over the shoulder of the media – the report itself could have been acceptable if it had restricted itself to facts rather than lies and fabrication to deride the Tejas and celebrate the Swedish Gripen and the US F-16 in comparison. This is a takedown of the parts that were bluff.

Most people do not know that fighter aircraft can carry fuel in two types of tanks. One type is the “internal tanks” in the aircraft and the other type is “external tanks”. External tanks are detachable and look like big bombs hanging under the wings or body of the aircraft. But they are not bombs. They are fuel tanks.

The word “endurance” must be understood. If a fighter plane simply takes off and flies straight and level at a high altitude from one place to another like a passenger plane – its endurance – its time of flight and distance flown will be much longer than if the same plane takes off, flies low and does violent fighter-combat manoeuvring. In the case of the latter, its endurance will be lesser. It is equally meaningless to speak of endurance without specifying whether the plane was using internal fuel alone or was also carrying external tanks. It is also a white lie to fail to mention that the F-16 is now a much bigger and heavier fighter than the Tejas and can carry more fuel. The F-16 has had time to develop – the time that people trying to kill the Tejas want to deny.

Charts available online show that when used in combat over Libya, the Gripen actually only flew sorties that lasted 55 to 90-odd minutes. Never three hours. In doing these sorties, the Gripen rarely exceeded a total of about 500km and never reached 1000km even once. Every single image of the Gripen in action over Libya shows that they carried additional external fuel tanks under the wings in addition to internal fuel.

Other charts show that the F-16’s combat radius – using internal fuel alone is about 500km and not the thousands of kilometers that can be covered in four hours. The latter would have been what is called as a “ferry flight” with the F-16 flying across a continent or an ocean from one base to another with a full load of internal fuel and external tanks. Not a combat sortie.

The fairy tale that the F-16 carries a seven-tonne payload can easily be shown to be a lie by referring to a large number of official booklets and brochures online. The F-16 carries a payload of under 5.5 tonnes. Nowhere near seven tonnes. If the report is from an air force source as claimed, it is shameful. Someone is deliberately lying and obfuscating – and the exact reason is unclear – but it cannot be anything good.

The statement that Tejas maintenance costs are higher is laughable. No one in the Indian Air Force has any experience maintaining or costing the maintenance of Gripen or F-16 under Indian conditions. Whoever made this ludicrous claim is simply reading off a seller’s brochure in a fit of brochure worship. Naturally, the seller, hoping to make big bucks, will paint as rosy a picture as possible. Time and time again, we Indians have been fooled by shiny foreign brochures promising the moon and we only get a lemon for our money.

Over 30 years, the F-16 has become heavier and heavier as its makers have had all that time to improve it. The Gripen too was inducted 20 years ago and went into service without inflight refuelling, which came only five years after it went into service. Will we extend the same courtesy of time for the Tejas? It does not appear so, given these vicious media attacks on the Tejas.

I understand that the Indian Air Force needs numbers and a bigger squadron strength – but these reports sound like a hit job from corrupt sources trying to push imports over the Tejas. India must not do what we did to the HF 24 again. Older people among us recall very well how the improved and inherently safer Indian modification of the accident-loving Gnat aircraft called the Ajeet, was discarded prematurely. Worse still, the underpowered HF 24 was nipped in the bud in favour of the underpowered Jaguar.

The Tejas now is a lot more than was originally envisaged. It is a 4-plus generation aircraft, capable of carrying short- and long-range air-to-air missiles and smart laser-guided bombs. It has a multimode radar that can be used to track ground targets or air targets and is one of the few aircraft in the Indian inventory that can switch roles to hit ground targets or shoot down aircraft simply by a software switch. The weapons can be aimed simply by the pilot looking at the target. The development of the Tejas has made it the safest fighter aircraft testing programme in the world with a stellar benchmark-setting record.

Unlike the Gnat and the MiG-21, which used to become uncontrollable in situations where the pilot was busy and hardly expected it, the computer-controlled Tejas simply will not allow the pilot to make an error. This makes it easy to fly and reduce the pilot’s workload so he can concentrate on his job as a fighter rather than keeping 50 per cent of his attention on trying to avoid a crash. It is all to easy to forget how many young lives were lost with crashing Gnats and MiG-21s. Readers may find it hard to believe that the Gnat had over 1,200 serious accidents or safety incidents in its 21 years – amounting to one adverse event every six days! This is the recorded history of the Gnat in the Indian Air Force.

The small size and composite structure of the Tejas makes it inherently stealthy in an era when nations are doing backward somersaults to make stealth designs. It can carry the same bomb load as the now-retired Canberra, the only “bomber” ever operated by the Indian Air Force. And even if some of the load is sacrificed to carry extra fuel tanks – the Tejas can still carry two-thirds of what the Canberra bomber used to carry.

Test pilots and squadron pilots flying the Tejas have described it as a delight to fly, highly manoeuvrable, with better electronics and controls than Mirage 2000 and a capable fighter. The Tejas’ delta wing has a very low wing loading – which means that the wing catches the air like a kite, making the Tejas a great performer at high altitudes like Tibet and over the Himalayas, unlike the Jaguar whose wings gasp for air at high altitudes.

The strike range of the Tejas is currently enough to take out almost any target of note in Pakistan and all important across the Line of Actual Control targets in China-occupied Tibet. And its performance can only get better if the programme is not killed by a bunch of Jaichands possibly looking to line their Swiss accounts at the expense of the nation.

The Tejas must not be sacrificed to suit the machinations of an import lobby! Do not kill the Tejas.