Battle Of Adrianople: The Chain Of Events That Marked The Beginning Of The End Of Western Roman Empire 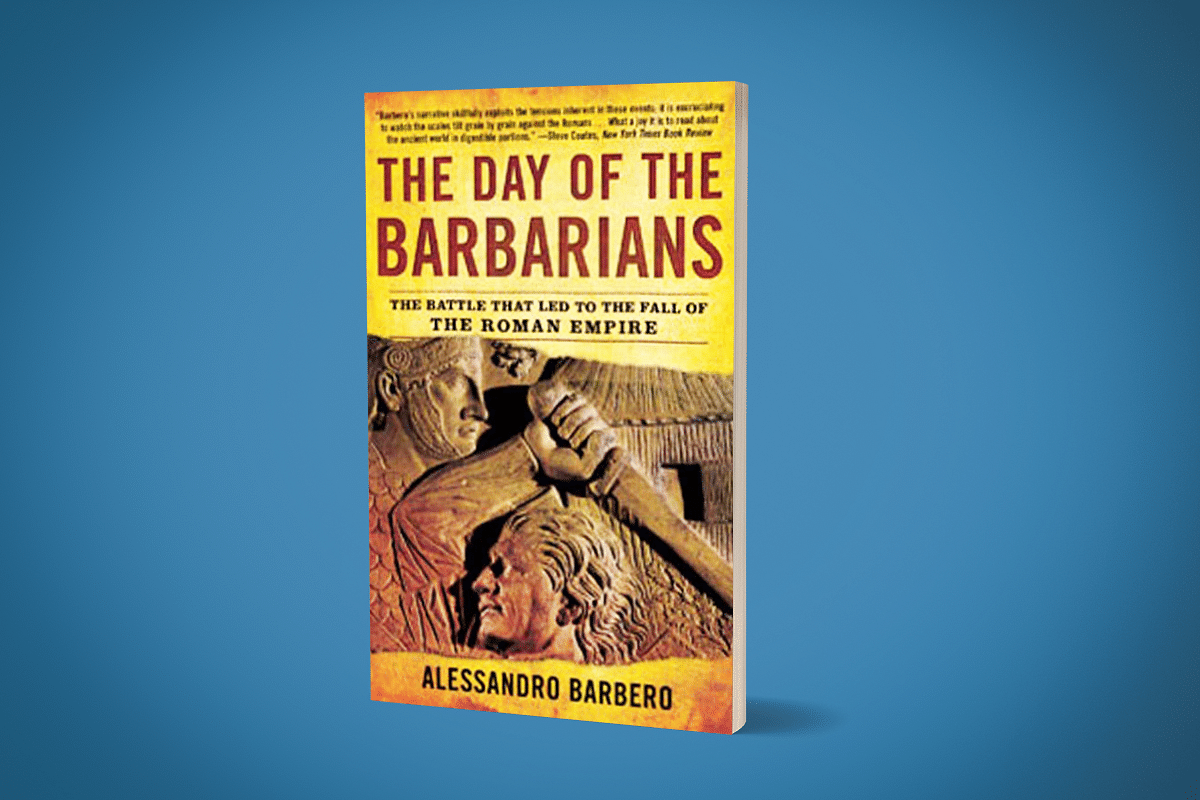 The cover of the book, The Day of the Barbarians.

The Day of the Barbarians: the battle that led to the fall of the Roman Empire. Alessandro Barbero. Walker Books. 2005. Pages 192. Rs 251.

Belligerents will disagree, but not all battles are created equal. Beyond matters of scale and casualties, there are battles that leave a profound impact on human history.

Gaugamela, Hastings, Tarain, Sekigahara, Trafalgar, Panipat, Poltava, Assaye, Waterloo and Stalingrad are but a few that evoke feelings of awe at what was, and provoke wistful thoughts about what might have been.

In The Day of the Barbarians, historian Alessandro Barbero delivers both in spades. Taking the reader to Adrianople at the Turkish-Bulgarian-Greek border, the book narrates events of 9 August 378 CE, believed to be the start of the downfall of the Western Roman Empire.

But to some, the Battle of Adrianople signifies something far greater. As Barbero notes in the prologue, after accepting that the battle isn’t as famous as Waterloo or Stalingrad, “some believe that it signified nothing less than the end of the ancient world and the beginning of the Middle Ages”.

Barbero begins with an assessment of the extent and diversity of the Roman Empire in 378 CE, using rivers — Rhine, Danube, and the Tigris — to mark northern and eastern frontiers, much as the Romans themselves might have done.

Moving on to politics and culture, while acknowledging the challenges facing the empire, he disputes the popular view that it was in a state of terminal decay before Adrianople.

Beyond administrative corruption, the book identifies two critical problems facing the empire in the third and fourth century: continuous usurpation of power by generals leading to political instability, and barbarian raids across the empire’s northern frontiers.

But neither problem was at its peak around the time of Adrianople. And even from the cultural perspective, although Roman society was witness to competition between Pagans and Christians, and brutal sectarian rivalries between Catholics and Arian Christians, the empire didn’t yet appear to be in decline.

Another marker pointing to the empire’s vitality before Adrianople, Barbero argues, were many barbarian tribes seeking to be accepted into it.

After a brief survey of the situation beyond the empire’s various frontiers, the book zeroes in on the other protagonist: the Goths.

And while they were often dismissed by contemporary Romans as uneducated barbarians, Barbero is far more sympathetic, and shows that the difference between the two wasn’t as drastic as some Romans might have sought to assure themselves.

Against this skillfully painted backdrop, Barbero introduces the reader to the cataclysm of 376 CE.

Something caused the barbarian tribes of the north to flee their lands and gather on the banks of the Danube. And from there, the tribes formally sought entry into the empire.

The contextual buildup in the book explains Rome’s fear of barbarian incursions and helps make sense of the confusion and trepidation that the request made by the Goths engendered in Roman society and government.

But with the empire perennially struggling to find labour for agriculture and war, the elites saw this mass of refugees as a gift. After deliberations with his eunuchs and advisors, the Roman emperor Valens ordered the tribes to be allowed inside; they were to be settled in regions that need manpower, and the able-bodied among them would be conscripted into the army.

The orders, however, weren’t implemented on time. The administration was rife with corruption, especially in more remote provinces, and the refugees didn’t receive what was promised.

Local officials keen to make a quick buck delayed processing them and sending them deeper into the empire’s territories, hoping that starving tribes would sell themselves into slavery instead.

Meanwhile, as news of the emperor’s decision spread beyond the Danube, more and more tribes showed up on her banks. Frustrated with the slow pace of evacuation, they crossed the raging river on makeshift rafts and boats.

Many perished, but many more made it across. And the sheer numbers overwhelmed the Roman administrators charged with keeping the process orderly.

Finally, growing weary of the deluge, the administration began transferring them across the province of Thrace, the massive column accompanied by a strong — but inadequate — military escort.

But the refugees were scared and hungry; the food meant for them had been pilfered by the local administrators. And at the walls of Marcianople, in eastern Bulgaria, matters came to a head.

Suspecting treachery and realising that by killing Roman soldiers, they had crossed a threshold they couldn’t hope to return from, the Goths plundered the rich countryside, hoping to accumulate food and treasure in the time it took the Romans sent a larger army.

The battle and the aftermath

Readers familiar with the author’s magnificent The Battle: A New History of Waterloo (more on this in another review) might expect the book to dive headlong into a thrilling, edge-of-the-seat narration of the actual battle itself at this point. But Barbero takes a more measured tack, pausing often to provide a context for each successive decision.

And in retrospect, those decisions — and the events they lead to — seem inevitable.

With the sheer number of mistakes made, the suspicions and distrust engendered and entrenched, it sometimes seems that the two protagonists—the Roman Empire, and the Goths led by Fritigern—are locked onto a collision course by a higher power.

The collision took place, but it wasn’t at Adrianople. Instead, Barbero takes time to describe the Battle of the Willows, fought close to the Danube delta at a place called Ad Salices: by the willows.

Here, an army commanded by three Roman generals caught up with the Goths and fought them to a bloody stalemate, with heavy losses on both sides.

Having failed to overcome the Goths, the Roman columns withdrew for several days, leaving the Goths free to continue plundering. And with news of the riches on offer in the Roman province of Thrace spreading far and wide, more tribes crossed the Danube and joined Fritigern.

As 378 CE dawned, the emperor himself marched north from Constantinople to rid the empire of its barbarian problem.

But even as his army bore down upon the enemy near Adrianople, he held on to the possibility of a negotiated agreement following a Roman show of force; he and his advisors still hoped to integrate the barbarian tribes into the empire.

The draw of cheap manpower would prove to be the empire’s nemesis.

Barbero’s description of the battle of Adrianople itself is remarkable, but the book shines in its examination of the crushing effect of that defeat on the Roman psyche.

After Valens, it fell upon Theodosius to stabilise the empire, and he succeeded by co-opting the Goths, hiring entire tribes as mercenaries. And in doing so, planted the seeds for Rome’s eventual destruction.

It is here that the reader is left wanting more.

Unlike The Battle, the pace of this book is measured. The narration, especially of battles, isn’t as detailed; a function, perhaps, of the antiquity of events and the paucity of primary sources.

Indeed, as Barbero acknowledges in ‘Suggestions for further reading’ (25 pages of suggestions) at the end of the book, most of the account of the battle and the period preceding it is based on a single contemporaneous source: a Greek historian named Ammianus Marcellinus.

Despite such constraints, the book provides a fascinating look into the last century of the Western Roman Empire.

Barbero’s contextual asides make it enriching for the casual reader, and one may be tempted to draw parallels with a modern-day empire — also afflicted by a migrant problem — that is widely believed to be in terminal decline.

Indeed, the parallels themselves make this a worthwhile read.