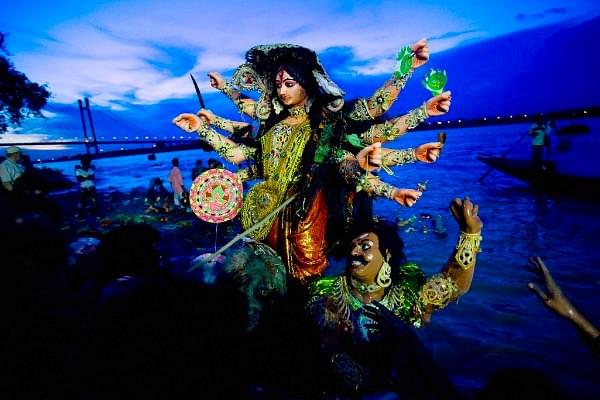 Devotees carry an idol of Hindu goddess Durga before immersing it in the river Ganges during the Durga Puja festival in Kolkata, India. (Daniel Berehulak/Getty Images)

When you want to rule over somebody against his or her will, you need to create a moral justification for it. If you want to justify patriarchy, you can paint women as weak, volatile, impure and/or unstable, and, thus, incapable or worthy of agency. If you want to justify conquest and colonialism, you can paint the native as a personification of evil, or indulging in terribly inhumane practices (sati, child sacrifice), and, thus, unlikely to act reasonably. Hence the need for imposing higher civilisational values by votaries of the European Enlightenment, the White Man. Over time, the colonised native mind will start believing that his oppressor is his emancipator.

Swagato Ganguly’s book, Idolatry and the Colonial Idea of India: Visions of Horror, Allegories of Enlightenment, brings this aspect of colonisation into sharp focus. Ganguly, who works with a major media group as Editorial Page Editor, demonstrates how the British colonial regime used Indian idol worship—or to use the more pejorative term, idolatry—to demonise the natives and their traditions. To use the author’s words, “From the biblical conception of false gods, idolatry came to designate in the Indian context a flawed cognitive apparatus overdetermined by images, a weakness of reason which bedevilled the subjects of colonial rule, thus legitimising the latter’s ‘civilising mission’ of upholding Enlightenment and emancipatory values in a hostile environment.”

What is interesting about Ganguly’s book is the expert way in which it explores the connection between European Indologists, Orientalists, British administrators, and evangelical groups, each with their own imperialist and ‘civilising’ agendas, and the use of the theoretical limitations of idolatry to demonise Indic practices. Their collective attacks on idolatry impacted even the reformist agendas of Raja Rammohan Roy and Bankimchandra Chatterjee.

At the other end of the spectrum, many Indologists and Western writers on India also imagined a pure, pristine form of Hinduism that was subsequently contaminated by the evil of idolatry. Orientalists like William Jones and Max Mueller saw the classical (or Vedic) Indian past as a “golden age notable for its upholding of morality and uncomplicated, quasi-monotheistic religious practice, virtues that had since been forgotten due to the growth of idolatry.”

Indian reformers like Roy thus preferred to see monotheistic virtues in the “original” Hinduism, even converting Adi Shankara’s advaitic “monism” into some kind of monotheism. Says Ganguly: “Rammohan’s translations (of Indic texts) too are governed by a desire to locate within the Hindu text a Platonic/Christian metaphysics.” He illustrates this beautifully by how Roy explained the Gayatri Mantra, where the worship of the Sun is not explained in its literal sense but as worship of the spirit pervading the Sun. In this, Roy essentially follows Jones’ interpretation of the mantra as non-idolatrous and monotheistic in its basics.

Defeated people are anyway inclined to believe partly in the superiority of their conquerors and the ideas they come with, but when the colonial project includes sharp ideological attacks on Indic traditions and practices, the subject population, including its reformist thinkers, tends to internalise these criticisms and exhibits the same tendencies as their overlords.

Ganguly’s book is divided into five basic chapters after the introduction. In Chapter 1, he tackles the duplicity of colonial images of India, as seen through the writings of Jones and James Mill, the latter having written extensively on India without coming within a thousand miles of it. In the next chapter, Mueller’s Orientalist approach to India is examined through the prism of Western metaphysics, which effectively conflated African fetishism and Indian idolatry, both being perversions of the “right” enlightened approach of an ideas-driven approach to religion and god. While Jones went to the extent of claiming that original Hinduism was mostly monotheistic and non-idolatrous, Mill won’t give Hinduism even this alibi in order to be comparable to Abrahamic religions. In his view, idolatry is separated from monotheism by a brick wall, and not a blurry line. For Mill, separating monotheism from idolatry was no less important than separating fact from fiction. In this, he saw religion deriving from “ideas” as superior to religion that derives from natural phenomena like evolution and sexual reproduction.

Writes Ganguly: “Mill thus subscribes to the Christian logocentric model of creation through mental intention and verbal utterance. God may be thought of in this model as a kind of supra-Cartesian subject: ‘I think, therefore the world is.’ Hinduism, by contrast, models creation on sexual reproduction: ‘the Hindu could picture himself the production of a human being, even by the Deity, only in the way of a species of birth.’”

Chapter 3 explores the grotesque depiction of idolatry as seen through the writings of John Ruskin, Alice Perrin, and E M Forster. While Ruskin and Forster are relatively well-known in India, Perrin, born in India in 1867 to British parents, wrote novels and short stories set in colonial India. She is often compared to Rudyard Kipling (“The White Man’s Burden”) by her admirers. One write-up on Perrin’s collection of short stories, East of Suez, says the book “tells stories of illicit love and betrayal set against a beautifully-drawn backdrop of the mystical east, interweaving the supernatural with exquisite details of her characters’ lives”.

All three—Ruskin, Perrin, and Forster—saw Indian idolatry as a representation of the grotesque. For Ruskin, real art, which uses the grotesque to drive home a point, is a noble form of the grotesque, while idolatry involving gods is barbaric. Perrin’s romance novel on Idolatry sees idol worship as a dubious feature of Indian society, and articulates the Christian fear of contagion when living in Indian surroundings. For Forster, a gay by disposition, idolatry was not so much wrong as un-aesthetic.

The fourth chapter delves into how this critique of idolatry by Western writers influenced Roy and Bankim to launch their own versions of the fight against idolatry. The last chapter is about the author’s conclusion from his research into the subject. It is worth quoting at some length. “The colonial discourse on idolatry, by instituting a hierarchy between ‘idea’ and ‘image’, ‘belief’ and ‘practice’, could administer a despotism in the name of ‘reason.’ As by dint of their idolatry very few of the colonialism’s native subjects could be deemed in possession of ‘reason’, they could be excluded from power. The language of idolatry, having its origins in theology, carries the baggage of a colonial version of knowledge, which instituted its own theology of reason.”

Thomas Babington Macaulay’s boast, that if India’s elite embraced English, “there will not be a single idolater among the respectable classes in Bengal thirty years hence”, has obviously turned out to be wrong. But he may well have left a posse of “liberals” among the Lutyens elite who continue his good work of demonising Indic traditions, including idolatry, as some form of grotesque evil that must be vanquished with their kind of reason.

Meenakshi Jain, in her book Sati: Evangelicals, Baptist Missionaries, and the Changing Political Discourse, shows how the British drummed up this deplorable practice, which was confined to a few geographies, to give themselves a moral justification for colonialism and its excesses. Ganguly’s book looks more generically at the use of idolatry to achieve the same colonial purpose.

The colonial project of civilising India and helping its downtrodden continues, though indirectly. Ganguly starts his book with a reference to a 1984 film, Indiana Jones and the Temple of Doom, a Steven Spielberg film, where the hero finds the Hindu priest, Mola Ram, ripping the hearts out of his victims to offer a sacrifice to Kali Ma. As the hero helps Mola Ram’s slaves, working in dark mines, escape, they are aided by troops headed by a British officer, who fire upon Mola Ram’s enforcers.

Who says colonialism is dead? It has merely mutated.