How Israel Became The Military Superpower That It Is 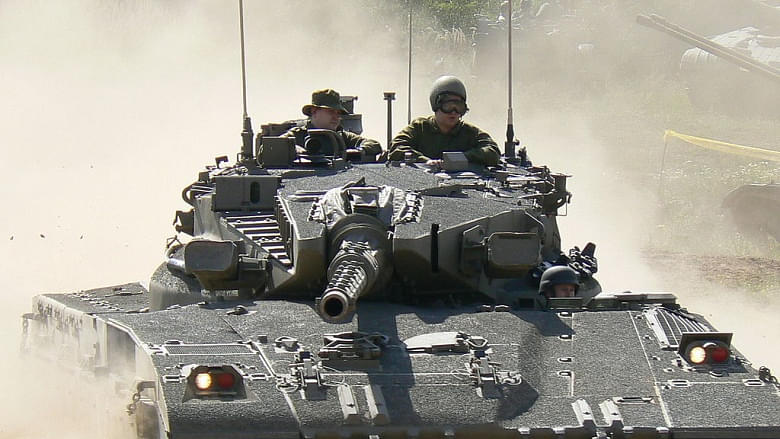 Today, Israel has become synonymous with military prowess. The tiny West Asian nation has a reputation for always deploying a qualitative edge on the battlefield and tactical chutzpah, an appropriately Yiddish word. Many states the world over, bigger and richer, struggle to replicate what the tiny Jewish state of eight-and-half million people has achieved within a short time. In The Weapon Wizards: How Israel Became a High-Tech Military Superpower, Yaakov Katz, editor-in-chief at the Jerusalem Post, and Amir Bohbot, military editor at Walla, describe Israel's journey from independence in 1948 when the new state had barely two shekels to rub together to its emergence now as a destination for high-tech military equipment.

Some of Israel's success is due to its rather unique situation – from the moment of independence, the state has constantly been at war. The nature of Israel's wars may have changed from state to non-state opponents but the threat still remains. As Haim Eshed, the father of Israel's satellite programme, casually remarks, "the shadow of the guillotine sharpens the mind". Material adversity, numerical deficiency and geographical disadvantage forced the Jewish people to compensate with motivation, intelligence and innovation. As former deputy national security adviser Reuven Gal commented, if Israel is not creative in its thinking, there is a chance that it will not survive; therefore, with its meagre resources, it had to become the ultimate jugaad nation.

There is, of course, the human element. As Katz and Bohbot explain, the greatest strength of Israeli society is its informality and absence of hierarchy. Contrary to expectation, mandatory military service has not made Israelis regimented. In fact, most revel in their casualness and indiscipline. New recruits into the Israeli Defence Forces (IDF) address their superiors as 'Sir', but after a while are encouraged to refer to their commanders by their first names and are not obligated to salute them. As US Air Force Lt Gen Ronald Kadish found out, in Israel, it is not uncommon to see aircraft mechanics argue with generals over the performance of a fighter jet – even in front of international visitors! What mattered Kadish's hosts was only that the lowly officer made sense.

Israel also benefits from the fact that its population seems to always be floating between active service and reserve duty. Along with the circulation of manpower, the IDF also benefits from the skills and networks this manpower brings in from the professional sphere. Their military experience gives them a perspective most weapons developers lack elsewhere in the world and helps them come up with innovative solutions to a fast-evolving battlefield. Some countries like the United States second military officers to defence contractors but personnel parachuted in run the risk of being seen as outsiders. The seamless flow of talent between civilian and military realms gives Israel a distinctive edge over other states.

The IDF does not take this inflow of talent for granted. “Reservists come for a set period of time, and the last thing you want to do is make them feel like they are wasting their time,” Shuki Ben-Anat, former head of the IDF Reserve Corps, explains. Much like their full-time brethren in the military, they often chase a problem up the chain of command until it is resolved. The emphasis is always on the workable practical rather than the perfect theoretical. “Harvard graduates might get a first-class education and a doctorate but it is all theoretical. In the IDF, soldiers get a doctorate in life," David Ivry, a former commander of the Israeli Air Force told the authors.

The Weapon Wizards is thematically divided into chapters around certain technologies, weapons platforms or tactics. The book begins with the smuggling of arms for the fledgling state of Israel in 1948 when no one except Czechoslovakia was willing to sell it weapons. Even government officials were involved in the web of deceit Israel wove to acquire precious weapons and technologies that could hopefully be replicated at home. The United States, Britain and France had put an embargo on arms sales to Israel in the hope that it would produce restraint in Moscow from supplying the Arab states with weapons.

The new state was incredibly blessed with talented immigrants such as Yosef Avidar, Lou Lenart and Shimon Perski during this period, who were skilled warriors, administrators, technicians or diplomats. More importantly, that the talent was put to proper use and not allowed to wither away and die under the burden of an overly cautious bureaucratic and political class. It was clear to David Ben Gurion, the nation's first prime minister, even as early as 1950, that material advantages were fleeting and that his country need qualitative superiority over its enemies. The Doctrine of Defense and State of Armed Forces, which the prime minister scribbled down during a vacation at Sde Boker, serves as the basis for Israel's defence policy to this day.

Katz and Bohbot dedicate further chapters to Israel's development of drones, the adaptive armour of the famed Merkava tanks, the birth of its satellite programme, ballistic missile defence and computer viruses. The Weapon Wizards also discusses targeted assassinations and Israel's practice of winning friends or purchasing diplomatic favours through the sale of arms. Readers would find it eye-opening to learn how much effort the IDF puts into reducing collateral damage during its raids on terrorist cells or assassination missions. Contrary to the general media coverage, the IDF has developed technology and tactics that would limit civilian casualties. It has been the experience of Israeli drone and fighter pilots, however, that civilians volunteers are forced into acting as human shields; in some cases, Israel has had to even call off its strikes.

Israel's emphasis on self reliance comes from even before independence when the Jews of the Fertile Crescent learned the hard way that they had no friends. Even the United States, considered to be the Jewish state's closest international friend, has refused to share intelligence or supply weapons to Israel more often than is commonly known. Perhaps one of the most egregious cases was when Washington turned down Tel Aviv's request of satellite imagery of their region in 1973 to confirm intelligence reports that their Arab neighbours were planning an invasion; the Yom Kippur War started a few months later, causing the greatest loss of Jewish life since the War of Independence.

Readers will be relieved, however, to learn that Israelis are not some sort of übermensch: despite the lax hierarchy, culture of innovation, and the pressure to survive, even the Israeli establishment has plenty of cautious status quoists who are always ready to fight the last war. The drone programme, for example, originally conceived to peek over the massive sand dunes Egypt had constructed on its side of the Suez Canal, was shelved in the early 1970s and it took the disastrous Yom Kippur War to reactivate it.

The story of the satellite programme is similar: with the possibility of peace looming by the end of the 1970s, Israel would lose the Sinai buffer zone. In that eventuality, the Israeli military wanted a way to keep an eye on its former foe's military without violating its airspace. Considered too expensive and a luxury a cash-strapped military could not afford, the top brass refused to sanction any money for the project. However, Major General Yehoshua Saguy, the commander of Aman, Israel's military intelligence, believed in the project so much that he diverted $5 million of discretionary funds from his budget into an off-the-books pilot programme. This incident illustrates both, the freedom Israel gives its officers and the audacity with which that freedom is sometimes exercised in pursuit of a national goal. An interesting side note is that Israel is probably the only country that launches its satellites westwards, against the spin of the earth, because a typical launch would contain the risk of flying over and crashing into enemy – Jordanian and Iraqi – territory.

The Weapon Wizards is a pleasurable and breezy read, filled with fascinating anecdotes from Israel's military history. However, scholars who study Israel might have preferred a more rigorous analysis of a couple or even a single project, spanning from conception to deployment. Such a story has the benefit of revealing the underbelly of the entire process and not just the pleasant, superficial elements of what must have been heated debates and technical challenges. Indian Air Marshal Philip Rajkumar's The Tejas Story: The Light Combat Aircraft Project, though not as smoothly or captivatingly narrated, is one such example.

It would also not be wrong to accuse Katz and Bohbot of producing what is essentially cheerleading for Israel and its military. This is not to take away any credit from the authors or from the subject of their book, who have painstakingly built their much-deserved reputation. However, a couple of chapters dedicated to bad ideas, good ideas that were shelved, or good ideas that could not be technologically achieved would have presented a more realistic image of the Israeli defence establishment as well as give readers a better understanding of the several – political, technical, tactical, bureaucratic, and economic – challenges faced.

Nonetheless, The Weapon Wizards is an enjoyable read with engrossing tales that offers interesting insights into the Israeli mind. Something that has been on my mind recently is the sense of purpose and nation that undergirds successful, stable states. If readers ponder past the personal accounts framed by specific projects, there is much more to learn from a tiny West Asian nation that is barely larger than Nagaland.