Isn’t It Time For Left Historians To Apologise To The Nation For Their Dishonesty? 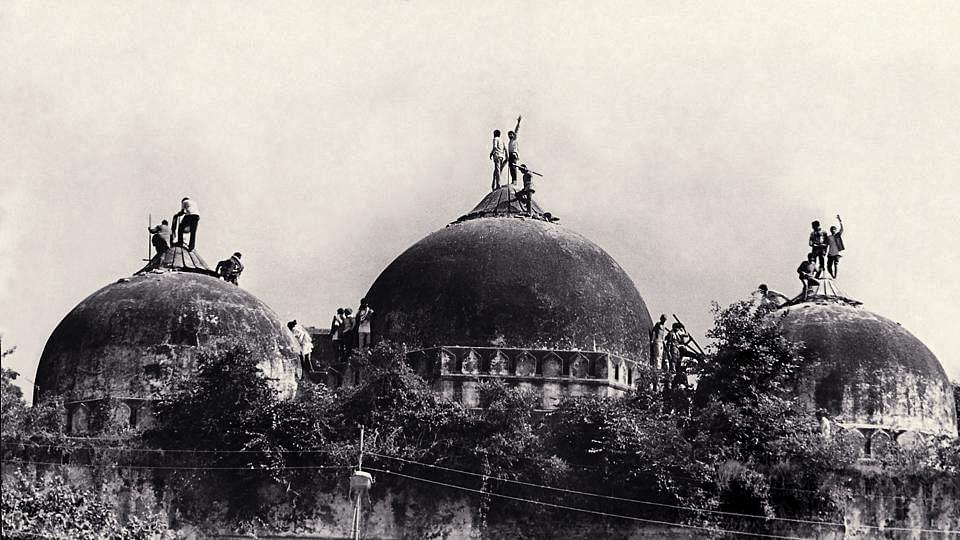 (The disputed structure, Photo by HT)

It is time for all of us to sit and exclaim: The Left has no clothes

The autobiography of a former Regional Director of the Archaeological Survey of India (ASI), KK Muhammed, shreds the last figleaf of legitimacy from India’s “Eminent” Leftist historians, and even the broader Indian Left ecosystem, which includes most mainstream political parties and large sections of the old media in print and TV.

In his book titled Njan Enna Bharatiyan (I, an Indian), Muhammed clearly indicts Left historians for actually preventing a rapprochement between Hindus and Muslims over the building of a Ram temple in Ayodhya, by making the Muslim side adopt intransigent positions. Firstpost quotes him as saying this:

“The Babri issue would have been settled long ago if the Muslim intelligentsia had not fallen prey to the brain-washing by the Leftist historians. A set of historians, including Romila Thapar, Bipin Chandra and S Gopal argued that there was no mention of the dismantling of the temple before 19th century and Ayodhya is a Buddhist-Jain centre. They were supported by historians Irfan Habib, RS Sharma, DN Jha, Suraj Bhan and Akthar Ali.”

That weeks after the book’s publication the big media has still not found time to discuss this beyond quoting the usual suspects about Muhammed’s lack of understanding of historiography tells us how the eco-system can kill truths that are self-evident to any normal individual.

Suppressio veri, suggestio falsi is the norm, as Arun Shourie pointed out in his brilliant critique of Leftist historiography, in his book Eminent Historians.

Muhammed’s assertion that the Left historians actually scuttled efforts at a compromise is buttressed by the fact that even after the Allahabad High Court judgment of 2010, which tried to create one more opportunity for compromise between the two communities by apportioning two-thirds of the disputed area to Hindu groups and one-third to Muslims, the Left historians criticised the judgment as a sellout. Romila Thapar called it a “political judgment which could as well have been taken by the state years ago.” To criticise it as a “political judgment” is a bit rich, when the Left has always believed in the political nature of historiography and historical accounts.

As a non-Left historian Meenakshi Jain notes in her book Rama and Ayodhya, the Leftist critique of the Hindu demand for a temple in Ayodhya kept shifting arguments depending on how much of their lies got proven wrong at any point of time. She writes that “initially, they (the Left historians) asserted that the disputed structure (the Babri Masjid) was constructed on a spot that was neither a place of worship, nor the site of any previous Hindu religious structure, nor was there any evidence to associate it with the birthplace of Rama. However, as the ASI excavations (ordered by the court) progressed, ‘a marked change’ in their approach became evident. Some archaeologists appearing on behalf of the Sunni Wakf Board tried to ‘set up a new case’ that there appeared to be an Islamic structure below the DS (disputed structure.”

There is only word for such sophistry: dishonesty. There is only politics, no historiography or historical rigour in the Left’s assertions on behalf of the Muslim side of the argument.

The only logical – and sensible – argument to make against the Babri verdict was a simple one: whatever be the Islamic history of the destruction of Hindu temples, breaking a mosque that now stood on a temple site is wrong because today’s Indian Muslims had no role to play in the destruction of the temple that stood on the Babri site.

But instead they went to absurd lengths to prove what was manifestly untrue.

We have been very indulgent with the Left and its efforts to play around with the truth because we implicitly believed two things about them: that they have their hearts in the right place, as they care for the less fortunate. And, more importantly, they had no stake in casteism or communalism, since their basic issue was class warfare.

But the reality is otherwise.

As the Sachar report showed, the condition of Muslims in West Bengal after more than a quarter-century of Leftist rule was among the worst in the country.

As for their position against casteism, they don’t even think caste discrimination exists, never mind their crocodile tears over the suicide of Rohith Vemula.

Vemula, a Dalit student of the University of Hyderabad, was originally a Students’ Federation of India activist who left this CPI(M)-sponsored organisation as it had no answer to caste discrimination (read why here).

Deepa Mohanan, a Dalit research scholar, has alleged caste discrimination in which she had to fight her battles alone, and the SFI was nowhere there to help.

But, most important, ask yourself where are the Muslims and Dalits in the CPI(M)’s leadership – we saw Basus, Bhattacharyas, Chatterjees, Namboodiripads, and Nairs over the years – but few members from truly disadvantaged sections.

So the Left’s alleged empathy for the disadvantaged is all theory, no practice.

As for the other assumption – that it has no stake in communalism – KK Muhammed’s assertion that they actively tried to scuttle a settlement between Hindus and Muslims shows that Left historians were working actively to promote communal trouble.

The Left routinely accuses the BJP and the Sangh of fascism, but has nothing to say about its multi-decade admiration for two acknowledged mass murderers in history apart from Hitler: Stalin and Mao.

It is time for all of us to sit and exclaim: The Left has no clothes.

If Leftist historians have any shame, they should apologise to the nation for their past dishonesties, whether it is in writing history or in how they have defended the indefensible.

But that may be expecting too much from people who think dishonesty is fine in their pursuit of class warfare. It is written in their holy book, written by one K Marx.