Love It Or Hate It, We No Longer Have The Right To Misunderstand The RSS 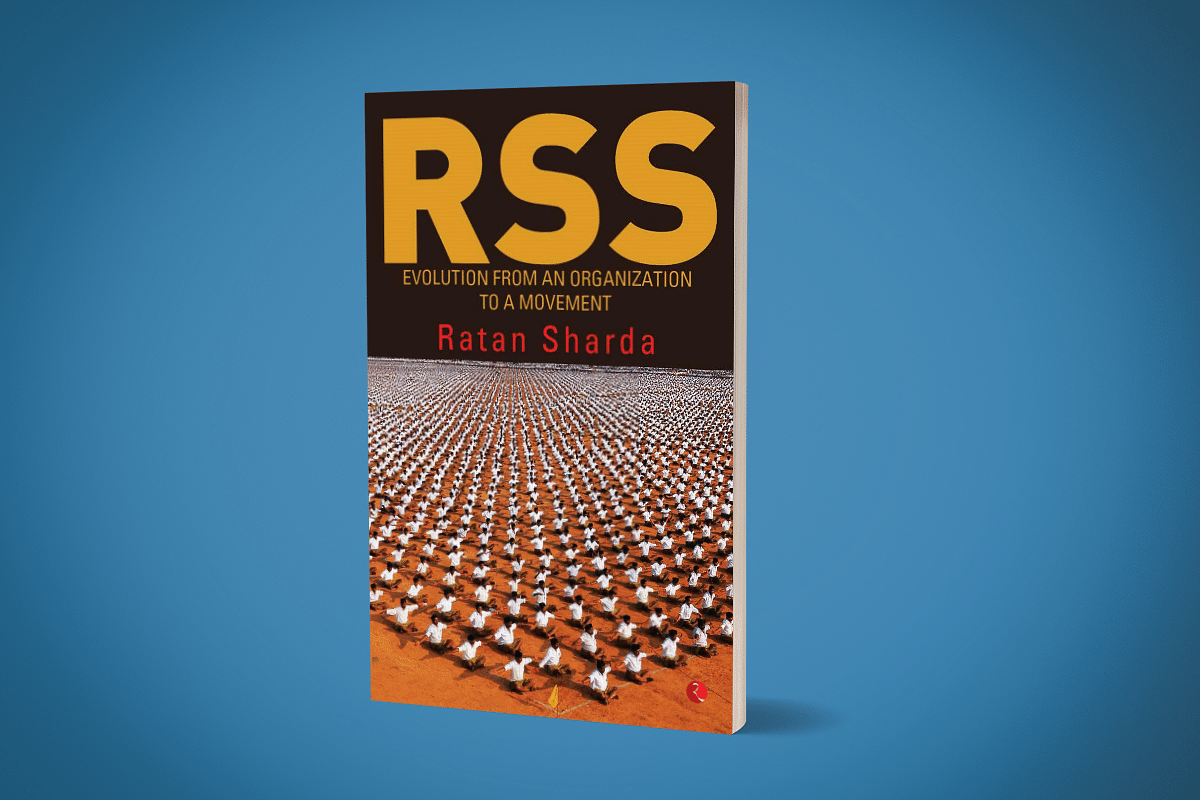 Cover of Ratan Sharda’s book, RSS: Evolution From An Organization To A Movement.

One of the challenges facing those who write biographies of interesting individuals or organisations, regardless of whether you approach the subject as a critic or a friend, is to combine honest inquisitiveness and open-mindedness with a degree of empathy for the subject.

If you don’t have these qualities, and you have already decided how someone or some institution needs to be analysed, you will fail. All you will get is a polemical piece of work that neither enlightens nor informs.

This is particularly important when evaluating an organisation like the Rashtriya Swayamsevak Sangh (RSS), which has been demonised for nearly three quarters of a century.

One reason for this is simply that Mahatma Gandhi’s assassin Nathuram Godse, with tenuous past links to the RSS, has been falsely held up as the quintessential RSS product, complete with an anti-minority mindset and penchant for violence.

This is mindless caricature. An organisation which has provided us with two prime ministers, including the current one, spawned nearly 30 frontal organisation that operate fairly independently in chosen fields like education, labour unions, or the defence of Hindu interests, does not deserve to be stereotyped by ignorance and pre-conceived notions of what it is about.

One way in which everyone can get to understand the RSS better is by reading Ratan Sharda’s latest book, RSS: Evolution From An Organization To A Movement.

This is not Sharda’s first book on the RSS. He has written two others, Secrets of the RSS, and RSS 360: Demystifying the Rashtriya Swayamsevak Sangh (read the review here).

What the latest book does is to connect the dots from the Sangh’s humble origins under Dr Keshav Baliram Hedgewar, where the initial focus was on character-building, shakhas and inculcating fearlessness among Hindus, to its fiery second Sarsanghchaalak, Guruji M S Golwalkar, to its present head since 2009, the unassuming but clear-headed Mohan Bhagwat, and to explain how the Sangh has evolved under various leaders with time.

It is possible to see Sharda’s book title as a bit grandiose: how can an organisation, whose members are still stereotyped in the media as doing daily drills with lathis wearing brown shorts, be seen as spawning a movement rather than just a narrow cult?

The answer lies in what it has achieved over the 96 years of its existence, despite all the ridicule, calumny and venom spewed against it. A movement can be called a movement when it no longer needs its founders to tell you what to do.

A small piece of evidence comes from another new book titled Sanghi Who Never Went To A Shakha, by Rahul Roushan, one of the founders of OpIndia.com. If someone can claim that you can be a Sanghi without ever attending a shakha, clearly its ideas have spread far beyond the shakha. It is indeed a movement.

The distinctive feature of Sharda’s latest book is that it chooses to map this evolution of the Sangh from an organisation into a movement by looking closely at the personalities and predilections of its six Sarsanghchaalaks, or heads, through its lifetime.

India has created many unique institutions and approaches to life and after-life, from the religious mutts established by Adi Shankaracharya to the guru-shishya parampara to the establishment of pilgrimage centres in every corner of the country. Institutions were created both top down and bottom up, by pilgrims walking everywhere to holy places and tirtha stans.

To this we must add the RSS’s unique idea of the Sarsanghchaalak, someone who personifies the Sangh, moves it in the required direction in changing times, and yet presides over it without creating a personality cult around himself.

Each Sarsanghchaalak has to earn his place at the top, even though the final choice is left entirely to the current head to nominate his successor.

Sarsanghchaalaks decide their own tenures, and while some continued till the end, others resigned midway due to reasons of health.

What emerges from Sharda’s book is the simplicity and non-egotistical natures of most of the RSS’s leaders, including those who reach the very top.

As he tells it, they tend to be experts in their chosen modern subjects (Hedgewar was a doctor, Golwalkar was a zoology graduate, Deoras had degrees in Sanskrit, philosophy and law), Rajendra Singh in physics, K S Sudarshan in engineering and telecom, and Bhagwat in veterinary sciences), but they carry their expertise lightly.

What they don’t take lightly is their personal commitment to building common purpose within their organisation, and a total dedication to the nation.

Sharda speaks of all the Sarsanghchaalaks as people with high IQs, EQs and SQs – intellectual, emotional and social quotients. This may sound too good to be true, for all organisations tend to atrophy with age and degenerate with success.

However, nothing in their public lives so far proves anything to the contrary, even though all the Sarsanghchaalaks may surely have had their personal quirks, faults and idiosyncrasies.

As a useful corrective to Sharda’s positive insider view of the organisation, one could also read the views of an insider who left the organisation (Sanjeev Kelkar, Lost Years Of The RSS), or an outsider’s view of the insides of the Sangh (Walter Andersen and Shridhar Damle’s The RSS: A View To The Inside).

What connects all three, insider, critic and researcher-biographers, is one simple point: they tell the stories with respect and understanding.

Love it or dislike it, the RSS is here to stay and it needs to be understood on its own terms.

As Makarand Paranjape, director of the Indian Institute of Advanced Study, Shimla, says in his foreword to Sharda’s book, the present Sarshangchaalak, “Dr Bhagwat, has embarked upon a unprecedented outreach programme involving wide-ranging talks, discussions, and meetings with all sections of Indian society. We do not, in other words, have an excuse to remain ignorant about the RSS. We cannot hide behind prejudice or bigotry, but must take the trouble to engage sincerely with its intriguing if not amazing history.”

Sharda’s book, which tells the story by giving us a glimpse of its six heads so far, removes the last remaining reason for not understanding the Sangh.

If nothing else, the Sangh has given us a tried and proven institutional structure that is entirely Indian in character, but entirely unique to its own history. What more can one ask from a book like this?

The Sangh cannot be said to have won over India, leave alone the world. But it has transcended the first two stages where it can be ignored or ridiculed.