Rajendra Chola’s Portrait For Mazgon Docks: A Tribute To The Naval Might Of Cholas 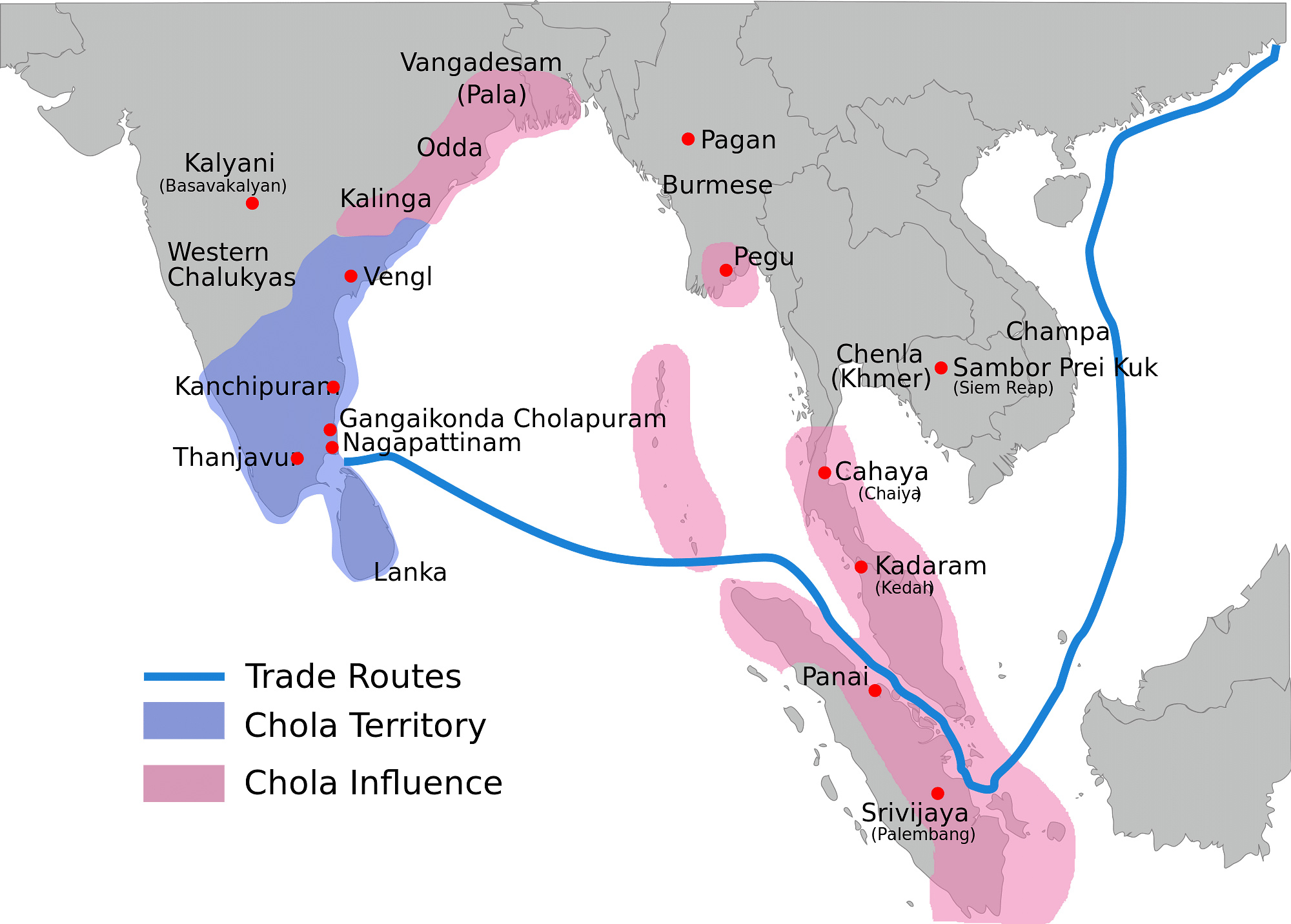 According to this report in The Times of India, the governor and chief minister of Maharashtra will dedicate a portrait of the Chola king Rajendra Chola I to Mazgon docks. This is fitting as the Cholas had arguably the best organised navy in all of Indian history.

This occasion though, also gives Indians an opportunity to reflect on how they approach their own history. For, in India, except for a handful of icons, all other history makers are remembered regionally and not nationally. So, Krishnadeva Raya remains an icon only in south India; a leader like Lachit Borphukan of only the Assamese; Marthanda Varma, who defeated the Dutch at sea, remembered in Kerala alone, and so on.

Southern India, per se, seems to suffer disproportionately from this approach to history. While the Rajputs, the Marathas, and the rulers of the Gangetic delta still find mention in history books, leaders and change-makers, who belonged to the south don’t in the same proportion.

It is in this context that the Maharashtra administration’s decision to dedicate Rajendra Chola’s portrait to Mazgon docks should be welcomed. Especially because, the Cholas were a great naval power themselves.

This aspect of their reign can hardly be described better than has been done by author Sanjeev Sanyal in his new book, The Ocean of Churn.

Given below is an excerpt:

“The Cholas were one of the three clans, who dominated the southern tip of India in ancient times. During the period of Pallava rule, they had accepted the overlordship of Kanchi but still retained significant political clout. At the end of the ninth century, a Chola general called Aditya helped the Pallavas crush a revolt by the Pandyas, the other ancient Tamil clan. As a reward, he seems to have been given sizeable new territories. Aditya used the new resources to build up his military capability and in AD 873 he marched against his Pallava overlords. The Cholas defeated and killed the last Pallava king Aparajita (whose name ironically means ‘he who cannot be defeated’). Aditya took care, however, to marry a Pallava princess and thereby absorb their lineage into his own.

Over the next several decades, the Cholas steadily expanded their kingdom. They repeatedly defeated the combined armies of the Pandyas and their Sri Lankan allies. However, not all their military campaigns went well. When the Cholas attempted to expand northwards, they were beaten back by the Rashtrakutas who had replaced the Chalukyas in the Deccan plateau. In fact, the Rashtrakutas pushed back and occupied the old Pallava capital of Kanchi. It took several years for the Cholas to recover from the defeat but they seemed to have clawed back the lost territory by the time Rajaraja Chola came to the throne in AD 985.

Rajaraja is widely regarded by Tamils as their greatest king. He defeated the combined armies of the Pandyas, the Sinhalese and the ruler of Kerala. This gave him control over ports on both the eastern and western coasts. Next he decided to teach the Sri Lankans a lesson. A naval raid occupied the north of the island and sacked the Sinhalese capital of Anuradhapura. The Maldives was also added to the empire. As thanksgiving for his victories, Rajaraja then built the enormous Brihadeswara temple dedicated to Shiva. It is now a UNESCO World Heritage Site.

The next Chola ruler was Rajaraja’s son Rajendra, who assumed the throne in 1014. He initially had to put down revolts by the old rival clans and consolidate his control over Sri Lanka. He then led an extraordinary military expedition that made its way north to the banks of the Ganga. Although the Cholas did not attempt to maintain control over these northern lands, Rajendra was clearly very proud of having made his way to the holy river. Water from the Ganga was carried back in golden vessels and a new capital was built—‘Gangaikonda Cholapuram’ meaning, ‘The City of the Chola who brought the Ganga’.

From the perspective of Indian Ocean history, however, the most significant event of Rajendra’s rule was a major naval raid on the Sri Vijaya kingdom of Sumatra and Malaya. In order to appreciate the historical context of this event, one needs to step back and understand the geo-political dynamics of the times. The maritime trade route between India and China had become very lucrative and there were two main routes. The first passed through the Straits of Malacca, between the Malay peninsula and Sumatra. The Sri Vijaya kingdom controlled this route. The second, more southerly route, passed through the Sunda straits between Sumatra and Java. Although it was a bit of a detour for those going to China or Champa, it had better access to the spice growing Maluku and Banda islands. This route was usually controlled by the Javans. Not surprisingly, there was constant rivalry between the Sri Vijaya and the Javanese kingdoms.

The late tenth century was a period of prosperity in the Indian Ocean rim as trade boomed between the Song empire in China, the Cholas in southern India and the Shiite Fatimid caliphate that controlled Egypt and the Red Sea. The rivalries of South East Asia were proving to be a major threat to this economic pipeline. In AD 987, a Sri Vijaya diplomatic mission made its way to China. During its stay in China, the diplomats were informed that their country was under attack from the Javan kingdom of Mataram.

They decided to head home but the war escalated and the mission found itself stranded in Champa for a year. It is likely that they received new instructions from the capital for they headed back to China and pleaded with the Song emperor to place Sri Vijaya under its protection. Thus, China came to have influence in the region.

The Sri Vijaya would have been aware that the entry of the Chinese into the Indian Ocean could elicit a response from the Cholas. Thus, they simultaneously sent missions to the Chola kings as well as made generous grants to Hindu and Buddhist temples in Chola ports. Amusingly, Chinese records show that the Sri Vijaya were playing a double game because their diplomats were deliberately misrepresenting the situation by claiming that the Cholas paid tribute to them!

The Sri Vijaya seem to have used Chinese protection to build up their own strength. Not surprisingly, this caused their neighbours to become concerned. Around 1012, Suryavarman I, the king of Angkor, chose to send an unusual gift to Rajendra Chola — his personal warchariot with which he had defeated his enemies. In the Indic cultural context, such a gift has great symbolic importance and it is likely that Angkor was trying to woo the Cholas as a way to counter-balance the Sino-Sri Vijaya alliance. It is also possible, that Angkor was trying to reopen the old trade route through the Isthamus of Kra as a way to bypass the contested straits. Amidst all this hectic diplomacy, the Cholas sent a direct diplomatic mission to China in 1015.

The ground situation, however, suddenly changed in 1016 when the Sri Vijaya and their allies defeated the Javanese and sacked the Mataram capital. This left the Sri Vijaya in control of both sea routes. We have evidence to suggest that it soon exploited this situation by exacting exorbitant tolls on merchant ships. Rajendra Chola probably sent a small naval expedition to Sumatra in 1017 as a warning but it was not taken seriously. Thus, the Chola returned in 1025 with a much larger fleet.

We do not know the exact sequence of events, but a study of the available information suggests the following: The fleet probably assembled near the main Chola port of Nagapattinam. Appropriately for a port that traded with South East Asia, the name means ‘Port of the Nagas’. There is still a major port there but the medieval port was probably several kilometres to the south. The Chola fleet would have first sailed south towards Sri Lanka before swinging east using ocean currents that would have taken them across to Sumatra. They probably then sailed down the west coast of the island towards the Strait of Sunda where they may have been resupplied by Javanese allies and picked up local guides.

The fleet now made its way north into the Straits of Malacca and systematically sacked Sri Vijaya ports along the way. Finally, we are told that the Cholas decisively defeated the main Sri Vijaya army in Kadaram (now Kedah province in Malaysia). The invading force then withdrew, stopping by at the Nicobar Islands on their way home.

The Chola raid significantly diminished Sri Vijaya power but it is remarkable that the Chinese did not do anything to support their supposed vassals. It is possible that the Chinese were just as annoyed at Sri Vijaya’s rent extraction and had entered into an understanding with the Indians. The Sumatrans too seem to have accepted their reduced status as they continued to send ambassadors to the Chola court and even participated in a joint diplomatic mission to China. When a Chola naval fleet returned to Kadaram in 1068, it was in support of a Sri Vijaya king against his local rivals. Meanwhile, with external threats diminished, Java began to rebuild itself under a Balinese price, Airlangga. The process of revival would culminate in the great Majapahit empire in the fourteenth century.”