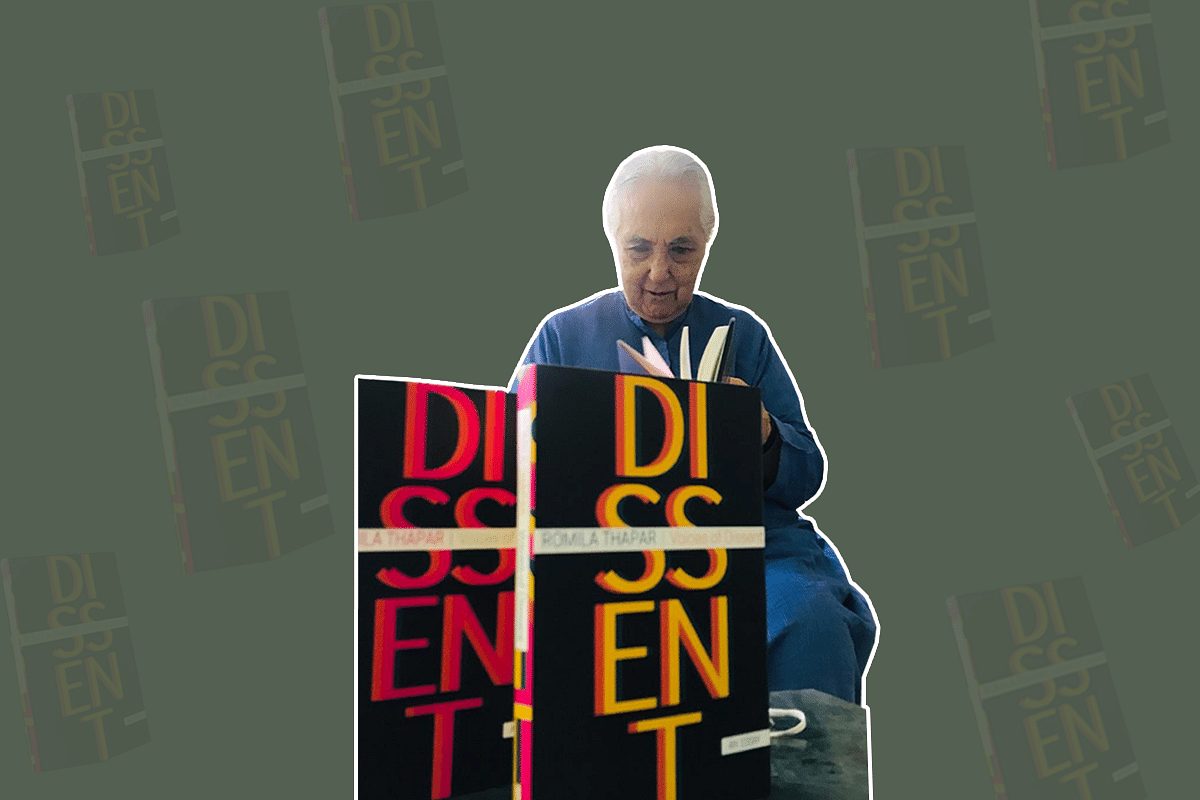 Writer Romila Thapar would have made a great environmental activist. She believes in recycling.

Unfortunately, she is a historian and she recycles the same old propaganda lines in style and, more importantly, with authority, which stems more from her ideological network than genuine scholarship.

In her latest book, Voices of Dissent: An Essay, she promises to take her readers on a journey into the history of dissent in India — from Vedic times to Mahatma Gandhi’s satyagraha and "places in context the recent peaceful protests against the Citizenship Amendment Act and National Register of Citizens”.

The book has a narrative that has been told right from the day when the first Protestant missionary started exhibiting its despise for Hindu Dharma — "the Brahminical priestcraft" oppressing the people.

Since then, this evangelist theme has resurfaced many times and in different jargons such as Indological, Marxist, Post-Modern and so on. Here, Thapar provides the same old ‘opiate’ of the colonised academics, though packed in a new wrapper.

In the first section of the long essay, the villains of the narrative are outlined. Her word jugglery could be admired but for the boring repetition of the same old yarn she weaves.

For instance, she acknowledges that it is incorrect to speak of an ‘Aryan race’ — that is the escape window — but discusses about the ‘Other’ of the ‘Arya’ which she identifies as those who could not speak the Vedic language.

So, throughout the first section of the ‘essay’, she presents the typical Aryan-Dasyu/Dasa binary with Vedic religion practising uniconic ritualism and the Dasas/Dasyus, ‘phallic worship’ as they could not speak the Vedic language properly etc.

If one is to find a continuity for satyagraha and dissent then one can find that right in the soulful protests of Kavashaka, which in turn resulted in the Brahmins asking for his forgiveness.

In Satyakama being admitted to the school of sacred learning there is social emancipation. Even Thapar is forced to acknowledge that, when she says, "here the Varna identity gave way to an ethical qualification”.

But then she asks her readers not to accept this as positive aspect of the Vedic culture but to see “a hint … of a subtle and new socio-religious interface of a more complex kind”. Worse, she tells her readers how to read the Vedic texts with a prejudiced framework: "The dasas is the culture of the Other”.

Then come the Shramanas whom she considers as possessing social good at their heart, but persecuted by adherents of ‘Brahminism’. Though today, this theory itself has been questioned heavily, she happily repeats the same lines.

Later, when it comes to the Islamist times the ‘Other’ becomes more nuanced. Those rebelling against the sultanate and Mughal empire, including the collaboration between the forest-dwelling and urban-rural warrior communities, acquire a new label and even a motive. The covet reference is obviously to the Bhil-Rajput cooperation and resistance to Mughal onslaught.

So she speaks of "the few cases where the adivasi clans had assisted adventurers to acquire political power" and then of "some concessions of status" by the rulers like applying tilak by the "adivasi chief" at the time of coronation of Rajput kings.

But, here, one should note the language. The vanvasi-Rajput cooperation amounts to assisting adventurers, and liberation from the empire is portrayed as "acquiring political power". More importantly, freedom fighters, true rebels like Rana Pratap Singh, become "adventurers". Rituals that came into existence in recognition of the sacrifices of vanvasi communities are relegated to "concessions".

While Thapar wants to present an alluring narrative that flows seamlessly from Shramanas to satyagraha, she meets a problem in Gandhi’s satyagraha being rooted in his reading of Bhagavad Gita. She tries her best to somehow disconnect Gandhi from traditional Gita but fails pathetically.

However, for the faithful and the establishment, this may appear like an academic miracle whereas any true Gandhian scholar would see only a clumsy sleight of hand.

The whole exercise by Thapar is to fabricate a historical continuity to the Citizenship Amendment Act (CAA) agitations. The true implications of the continuity is the slow but sure destruction of Hindu communities in India — right from the day of the first Islamist marauder’s slaughter of Hindus because they were Hindus to the 1971 East Pakistan genocide, where the country’s army was given written orders to account for the number of Hindus they killed.

The real democratic dissent has its roots in Vedic literature where a Kavashaka, taunted for being born to a dasi woman, would summon the river Saraswati. In a remarkable continuity of this assertion of spiritual oneness of all traditions and divine equality, Ravidas would summon river Ganga. Later, Sreedara Iyyavaal in southern Tamil Nadu, when ostracised by the Brahmin community for giving the ritual food to a socially excluded person, would make Ganga flow out of his well.

In all these traditional narratives beyond or bereft of the supernatural elements, there is dissent against social stagnation and a push towards social emancipation. That force for that push comes from the values which continue as invisible strands right from the Vedas.

Mahatma Gandhi himself defined swarajya as a Vedic concept no less and considered his satyagraha as being derived from his Vaishnavism. And coming to civil disobedience, the most visible democratic form of dissent in modern times, the most comprehensive and detailed study of its traditional roots in Indian context has been done decades before Romila Thapar’s present book by Dharampal — a really dissenting historian — dissenting to the established power structures of academia and media.

The book Civil Disobedience in Indian Tradition was first published in 1971 by Varanasi-based Sarva Seva Sangh Prakashan, now it forms the second volume of the collected works of Dharampal.

The foreword was written by Jayaprakash Narayan, another dissent — in the truest and most honest sense of the term. The book explores the protest movements by Indian people in the beginning of the nineteenth century decades before the 1857 uprising.

In both the books, (Dharampal (1971) and Thapar (2020) one can find superficially strikingly similar passages but there are crucial, basic differences.

Thapar follows the Marxist model (which is also subtly Eurocentric) where the dissent is traced to a particular group or ideology and set against the other. In this case, it is ‘Brahminical’ versus the ‘non-Brahminical’.

The pre-modern society is depicted as having marginalised or subjugated dissent but it was always present. Then whatever ideological movement with which Thapar aligns herself with — in this case anti-CAA movement, is shown to be a continued but conscious evolved form of that historical dissent.

Dharampal bases his book on empirical data. He does not have binaries. Then from the data, he points out the alternative ways of looking at history — different from the establishment history. Unaffected by colonisation of the brain, he points out how the colonial raj with its inherent infallibility of the state created a disruption in the traditional way in which people and the rulers were related.

This can be illustrated by two quotes from each of the books. The first is from Thapar:

Governance of the praja/subject by the rajas of the old or by the British Raj had to give way to the governance of a new category, the citizen. … That governance means representing the vision of the citizens was a departure from its earlier definition.

Note the equivalence made for the Hindu rajas and the colonial raj. And note also the careful omission of the sultans and Mughal emperors. Then it brings in the citizen as a new category and a break from the past. As against this, Dharampal and Jayaprakash Narain (in his foreword) portray Hindu polity as qualitatively different, placing the civil disobedience as organic movement to regain the original relation.

The concept of ruler-ruled relationship which they seem to have held, and which till then had perhaps been widely accepted, was of continuing interaction between the two. Such a dialogue seems to have been resorted to whenever required, and its instrumentalities included all that the people of Benares employed in this particular protest.

Jayaprakash Narain points out in his foreword how dharma reigns supreme over the king.

One shudders to think how Thapar would distort dharma as ‘Brahminical order’ though Brahadaranya Upanishad speaks of dharma as that with which even the weak, the powerless can defeat the powerful. The continuity in this regard is remarkable. At least more than 2,500 years later in far off Travancore, Iyya Vaikundar, heading the spiritual rebel movement against colonialism and social stagnation, would define dharma as that which protects the powerless.

Clearly, Dharampal with his keen observation of continuity and dynamics in tradition had written a book more on data and history and lesser on indoctrination. In conclusion, setting out in a grandiose manner to reinvent the wheel, which Dharmapal had already beautifully invented, Romila Thapar not only fails in the attempt but also ends up distorting its very shape — perhaps that is what the whole agenda is all about.