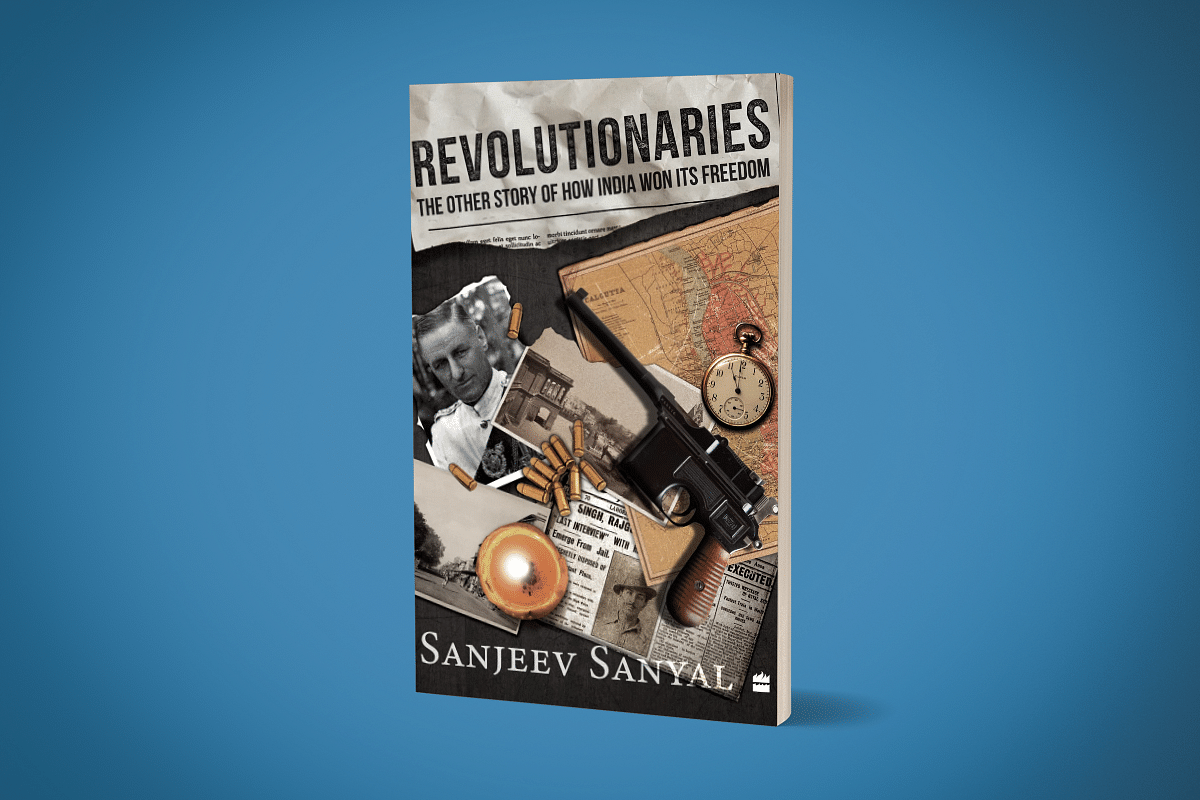 The cover of Sanjeev Sanyal’s book, Revolutionaries: The Other Story of how India Won its Freedom.

History has many perspectives, and lot of the perspective you get depends on who is writing it, and what his or her ideological motivations are. The longer the period an ideology retains power, the more skewed that perspective will remain as official history.

India’s freedom movement surely had many strands to it, but the dominant one still remains the one which states that it was largely non-violent, and the leadership was provided by Mahatma Gandhi and Jawaharlal Nehru, among others.

The revolutionaries who were an essential part of the movement, and whose violent acts of courage and resistance to British rule brought home the reality to our colonial masters that they could not continue to rule us forever, are mentioned only as asides.

Which is why Sanjeev Sanyal’s book, Revolutionaries: The Other Story of how India Won its Freedom, should be required reading in schools, colleges, and any institution of higher learning.

If it is not a core text, it should be part of additional recommended reading for any student trying to understand what really brought us independence. It wasn’t just the ahimsa warriors of Gandhi, but also the revolutionary warriors who shed actual blood to get us freedom.

In this conversation, Attlee clearly tells Chakraborthy that the British decision to leave India was more because it could no longer trust the Indian army, especially due to the military activities of Subhas Chandra Bose and his Indian National Army (read here).

He did not think Gandhi’s movement had much of a role to play in the British decision to leave.

And yet, when Narendra Modi got the statue of Netaji erected under the canopy on Delhi’s Raj Path, now Kartavya Path, where the statue of King George V once stood, the old Gandhi admirers demurred (read here, here, here and here).

While some demonised Netaji for seeking the support of the Axis powers, Germany and Japan, against British rule, others quibbled over whether the decision to put the statue was preceded by consultations.

The mere fact that Netaji was being given his due by Modi, and not someone they approved of, is indicative of the fear among our surviving 'brown sahibs' that their Nehru-Gandhi narrative on the freedom struggle will now stand substantially edited and rewritten.

There is no better person than Sanyal to do the retelling, and he does that brilliantly in his book Revolutionaries.

Sanyal is a very good storyteller. His book is not just dry history, but a well-strung-together narrative, complete with anecdotes and details showing the human side of these revolutionaries.

They are not just cardboard characters randomly inserted into an altered narrative of our freedom struggle.

The best way to make a heroic freedom fighter irrelevant is by divorcing his heroism from any deeper thought that may be informing his actions.

This is exactly the kind of calumny Sanyal bristles against. Sanyal builds the revolutionary narrative by giving it a context: many of them drew their inspiration from the writings and ideas of Giuseppe Mazzini and Giuseppe Garibaldi, the thinker-soldier duo who led to Italy’s fight for unification and independence.

Whether it was Veer Savarkar or Aurobindo Ghosh, the Mazzini-Garibaldi strategy guided many of the revolutionaries of the Indian freedom movement.

But to assume that the inspiration was entirely from figures outside India would be a travesty. The revolutionaries were equally energised by the historical resistance to tyranny provided by Chhatrapati Shivaji Maharaj, Maharana Pratap, Guru Govind Singh and Banda Bahadur, among others.

Nor were the revolutionaries just thinking of India like frogs in a well. As Sanyal notes, they created a network not only in India, but also “nodes in Britain, France, Thailand, Germany, Russia, Italy, Persia (now Iran), Ireland, the USA, Japan and Singapore.” These are not acts of purely idealistic revolutionaries.

Despite their varying emphasis and ideological differences — some were inspired by the Hindu Shakta traditions and warrior monks, others by socialist ideas, and yet others by a combination of the two — the revolutionaries drew inspiration from one another.

This is contrary to current 'secular' narratives, which pit Hindutva against secularism and socialism and even Hinduism.

The intellectual and muscular strength of the revolutionaries came overwhelmingly from Bengal, Punjab and Maharashtra, with Savarkar and Aurobindo Ghosh (later to become Sri Aurobindo) leading the pack.

Through the eight chapters, Sanyal brings to life the ideals, emotions and tragedies of our revolutionaries.

Chapters two and three deal with the thinker-revolutionaries, Sri Aurobindo and Veer Savarkar, and chapter four with the Ghadar movement and its offshoots.

Chapter five deals with the Andamans Cellular Jail, where many revolutionaries were sent after conviction, the massacres of Jallianwala Bagh, Khilafat Movement and the bloody Moplah killings of Hindus and Christians in Kerala.

Chapter six is about the Hindustan Republican Association. The last two chapters deal with the Chittagong armoury raid, and Netaji’s fight against the British, among other things.

No chapter, though, is a standalone read, dealing with only issue.

Sanyal’s storytelling skills come out very well when he weaves the larger narrative with the personal emotions and lives of the revolutionaries. The various revolutionary movements also get linked by people and the ideals they held in common.

The epilogue is particularly telling because of the heart-rending, and yet endearing, tales of love, betrayal and the courageous spirit of the revolutionaries.

One love story, of Ullaskar Dutt, a revolutionary who was traumatised through torture in the Andamans Cellular Jail, returns home after his travails only to find that his college love Lila is already married to another man.

But after independence, when he hears that she had become a widow and paralysed from the waist down, he traces her in Bombay (now Mumbai) and took care of her till the end. This story cannot but bring a tear to the eye.

Sanyal’s book tells us that our revolutionaries still have not gotten their due. But it is not just their story. It is the story of a nation that still has not paid its debts to those who sacrificed their lives for our freedom.